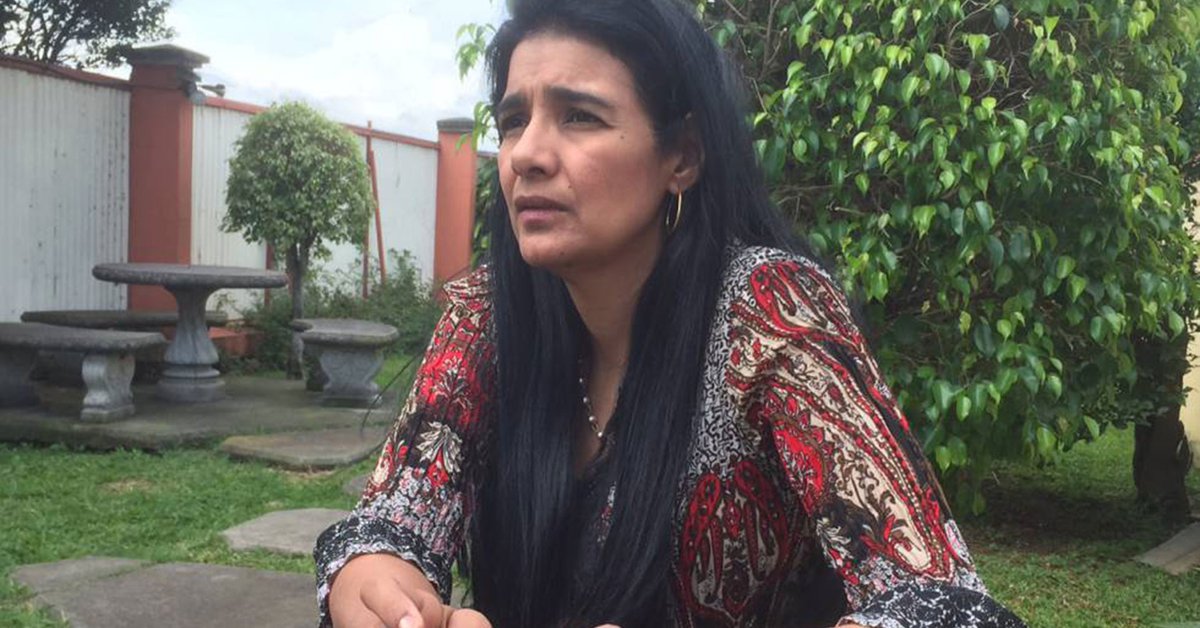 Zoilamérica Ortega Murillo is the biological daughter of the vice president of Nicaragua and stepdaughter of the President, whom she denounced for rape in 1998.

From his exile in Costa Rica, Zoilamérica Ortega Murillo, analyzes for Infobae the electoral crisis in Nicaragua after the judicial process initiated against Cristiana Chamorro Barrios, the opposition candidate who leads the sympathies in opinion polls.

Zoilamérica is the biological daughter of Rosario Murillo and stepdaughter of Daniel Ortega, the couple that dictatorially controls power in Nicaragua. In 1998, Zoilamérica accused Daniel Ortega of rape and sexual abuse, in a trial that was unsuccessful given the control that Ortega, even though he was an opposition, had over the judicial system. However, the event marked the family estrangement, and currently she remains in exile as an opponent of the Nicaraguan regime.

Cristiana Chamorro is the daughter of former President Violeta Barrios de Chamorro and the murdered national hero Pedro Joaquín Chamorro Cardenal. Last January, Cristiana Chamorro expressed her willingness to be an opposition candidate to face Daniel Ortega, or whoever the Sandinista Front designates, in the general elections next November. The news was received with virulence on the part of the regime, and this May 20 a legal process was initiated against her “for money laundering” with a view, according to political analysts, to inhibiting her candidacy. This week, a judge ordered his capture and he remains under house arrest, which would prevent him from registering his candidacy within the deadlines stipulated by the Supreme Electoral Council.

Zoilamérica, 53 years old, a sociologist with extensive experience in working with non-governmental organizations, sees in this “modus operandi” his mother’s signature. “The hallmark of my mother is to use her power to solve what she never resolved within herself,” she says in this interview where she recalls the old relationship that Murillo had with the Chamorro family.

-How do you explain the Cristiana Chamorro case from your experience?

-I feel absolutely moved and outraged. They live as a provocation the fact that someone who knows them raises their voice and leadership. Cristiana Chamorro knows them. Cristiana Chamorro knows who they are. She is someone for whom her masks don’t work. Rosario Murillo unleashes her fury not only against those who intend to take away her power, but against those who have already begun to take away her power. Because for them, recognizing that a part of the population believes in Cristiana, respects her and gives her an opportunity as a Nicaraguan to lead a political change, is already having lost power. In other words, the victory of the Nicaraguans over this dictatorship has already begun. That is why they want to generate these images in which they impose what they call “justice.” Cristiana is locked up. They inhibit it. But they no longer have the kind of power they would like, neither over her nor over any of the current potential candidates. Because the Ortega Murillo dictatorship will be able to control an electoral apparatus, but it cannot stop what the people are really thinking and feeling. Nicaraguans have already begun to defeat Daniel Ortega just by allowing themselves to have hope and to walk towards change.

READ  Morena would lose absolute control of the lower house

-Why does the issue of the Chamorro family arouse so much resentment in Rosario Murillo?

-It is curious that those people who once were or were part of Rosario Murillo’s life are the ones who receive the most cruelty and viciousness from her. This case is not the exception. I remember the times when she was the secretary of Dr. Pedro Joaquín Chamorro. She was just 22 or 23 years old, and I was 7 or 8 years old. The newspaper La Prensa was a bastion in the fight against the Somoza dictatorship. The fact that in the 1980s it was also a bastion against the Daniel Ortega regime gave him more reasons to oppose that whole family. For particular reasons, he shared a friendship with Claudia Chamorro (Cristiana’s sister). However, he never tolerated Carlos Fernando (Cristiana’s brother), even though he was director of the FSLN’s official organ “Barricada.” I do not know the reasons. What I do know is that Rosario Murillo always spoke disparagingly of the Chamorro family.

Years later, Mrs. Violeta Chamorro reaches power, defeating Daniel Ortega at the polls. Doña Violeta embodied the legacy of Pedro Joaquín Chamorro. Neither my mother nor Daniel Ortega have overcome the slap that meant that the people opted for peace and the end of that era. For both of them, the symbolism of having to give up “revolutionary” power to a woman who, from her populist logic, came from an “oligarchic” family, was also something that increased the animosity that Rosario Murillo had towards this family. She keeps everything in something like a huge “trunk” where she stores the list of all those that one day she will have to take revenge. She will find the time and the way to do it.

Analysts and international organizations have indicated that behind the legal process initiated by the Sandinista regime against Cristiana Chamorro is the express purpose of inhibiting her from participating in the elections next November.

-Do you see Rosario Murillo’s stamp in the design of the process?

-Your modus operandi has a signature. They are experts in civil death. This crime has a name. Another civil death. But this crime with Cristiana has another purpose: to maintain the division that still hinders us. With their accusation, they seek to weave doubt against each other. They say they use the law to disqualify, but the most important thing is to send the dark message: “Whoever approaches Cristiana will end up in the Prosecutor’s Office.” This message is not only for who approached yesterday, but also for who approached today. It is putting a mark on a person, in this case Christian, so that everyone is afraid and avoids and isolates them. It is a fence of fear or convenience, because those who still do not react to the imperative need for unity, will come with the discourse that “Christian is not convenient” and the opportunistic calculation will begin that what is convenient is whoever falls for them, even a little bit, good to the dictatorship.

I want to clarify that it is not necessary to support Cristiana’s candidacy to condemn what is happening to her. So far, I have not declared my sympathy for any of the brave candidates in the process, but that does not prevent me from making a strong claim against this outrage against a Nicaraguan woman. To give in to what is happening to her today is to be negligent in the face of another important sign of an obviously fraudulent electoral process. The fraud has already started.

-Why, if the objective is the inhibition of Cristiana Chamorro, have so many journalists involved in the process?

-This is an act with messages for many, in the best style of the mafia. It is a message to the political class, to private companies, to those who make alliances, to the international community. A big warning to all, that they will do anything to stay in power. This form of repression began in 2008, then was repeated in 2013. At that time, most Nicaraguans showed little solidarity with the people affected, perhaps because sometimes we fell into the fantasy of thinking that these acts were only against some. few. In my case, when they dismantled the NGO that I led, it was thought that this would only be against me. But now we know that what they once do with a Nicaraguan, they will later be able to do with anyone who objects to them. Even with a whole country.

For a government that criminalizes all forms of freedom, they want to send a message to independent Nicaraguan journalism. The most powerful weapon of the dictatorship is manipulation, double talk and fantasies that continue to sell to the historic Sandinista people who are victims of the mental kidnapping in which many and many of us were once. Independent journalism is and has been the voice that never shuts up. In my case, Nicaraguan journalism gave legitimacy to my truth.

Rosario Murillo and Daniel Ortega seek to extend their mandate in Nicaragua in the November elections, filling the electoral process with traps and outlawing their possible rivals.

-It gives the impression that the regime of Daniel Ortega and Rosario Murillo has already crossed all limits and does not care what legitimacy it might have. How do you explain this?

-They are fenced off. They know they started on a path of no return, but the more lost they are, the more reasons are invented to justify their violence. In their heads we are not thousands demanding freedom, we are thousands threatening their reason for being. Power is their life and asking them to step down is simply a death sentence for them. So this is a duel. In his head there is no alternative of coexistence, understanding, coexistence. They experience reality as a duel in the style of old western movies. Only one of the two sides is going to be alive. They or us. Either it’s them or it won’t be anyone. One of the two has to die. They want to pull the trigger first. They will think I am a fatalist. I’m not. I’m realist.

-If they see the dispute for power as a war, how could the opposition end the dictatorship from civic spaces, which are being closed?

-Only realism will make us recognize that there is no other way than unity. The lack of unity has weakened us before the international community, in our credibility with many Nicaraguans who are tired and disappointed with the divisions of the opposition. Lack of unity is the first sign that we are not ready to be truly free. Because to be truly free, you must first be free of arrogance, of leadership and of that thirst for power over others – as opposed to power with others – which is nothing more than repeating the history of those we oppose today. Let’s really make a difference. Here is a responsibility to political prisoners. With the exiles. Many of us want a sign of hope to regain the right to be in our country.

Who is and what does Cristiana Chamorro think: the interview with Infobae of the woman Daniel Ortega fears the most