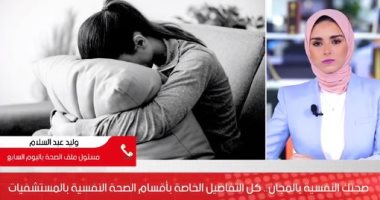 The special coverage followed a map of the most prominent names, places and wards of the 18 mental health hospitals run by the General Secretariat of Mental Health, at the Ministry of Health and Population, in addition to a number of specialized centers run by the ministry, which provide various psychological services, in addition to addiction treatment clinics..

It was the first mental hospital in Cairo in 1883.

The hospital was established on an area of ​​68 acres, after it was the palace of one of the princes.

There are 46 departments in the hospital, including men and women.

105 beds.. The total number of psychiatric and addiction medicine beds in the hospital.

It has a smoking cessation clinic.

It was established in 1912 during the reign of Khedive Abbas Helmy in a desert area on an area of ​​570 acres, of which 180 acres remain today..

Added to the General Secretariat of Mental Health on January 21, 1998.

It was included in the Mental Health Secretariat on January 21, 1998, and its activities focus on addiction treatment.

It is located in Al Sharqia Governorate.

60 beds.. the total bed capacity of that hospital.

It was included in the Mental Health Secretariat on July 1, 2010.

More than half of the hospital area is green space

3 sections for men contained in the hospital.

The hospital is an outpatient clinic only during official working hours.

It was annexed to the Mental Health Secretariat on January 21, 1997, after it opened in October 1967, and was built on an area of ​​52 thousand square meters.

The hospital is located next to Al-Sadr Hospital in Assiut.

240 psychiatric beds, the total number of beds in the hospital.

It was included in the Secretariat of Mental Health and Addiction Treatment on the first of July 2010.

It has different specialized clinics.