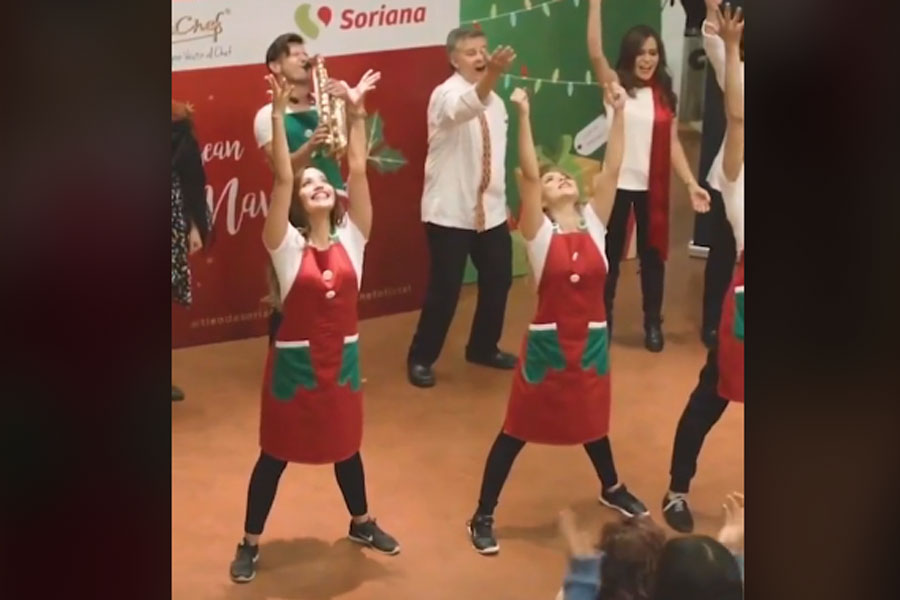 “You didn’t screw it up, you made it better”; Soriana removes “cast” from her flashmob

Today’s user loves when a surprise cameo breaks into a TV show or TV commercial. However, the final results are not always to the liking of many. Inexplicably, on certain occasions, producers and brands decide to remove them from the final cut. Some other times, they are simply cut because they are considered “not working”.

However, after the video shared by a user on their TikTok account, they show us that the final results are not always the ones that consumers fall in love with.

They revive Soriana’s flashmob without a surprise cameo; “You didn’t ruin it, you made it better”

A TikTok user shared a video about the time he “ruined” a Soriana’s flashmob. The video is viewed from the user’s perspective, with the camera filming to the left and behind the dancers’ backs.

What has delighted his followers in this surprise cameo of the user has been the naturalness of the event. Supposedly, at the end of the act there was a space between the dancers, which he took advantage of to show off.

In the video titled “The day I ruined a Soriana commercial” You can see how, when this act ended, the man runs and slides until he reaches the center of the shot, raising his arms. This resource is used in many musical works at the end of an act.

See also  Corona news: number of positive corona tests will continue to rise for the time being

These are some of the comments that could be read about this surprise cameo:

“Those from production who have been working since 5:00 am: 😐”, Luis David

“I think it turned out better” mannypinkman

“You didn’t screw it up, you made it better” Charles Torres

“Jarvis, cancel all my activities. I’m going to look for a Soriana commercial.” computer

“Let’s demand that this commercial come out on national TV,” dan_FF=)

However, although many users were delighted with the appearance of this man in the spot, they were not satisfied. Some even mentioned the profile of the chain store, soriana. The unexpected thing was that the chain decided to upload the commercial to its profile, although the results were not as expected.

It turns out that in the final cut of the flashmob, at no point is the account holder’s surprise cameo seen. Even Soriana’s CM commented “We found it! but you didn’t go out“, in the description of the video. This fact disappointed many of those who first witnessed the appearance of the user.

This is the video shared by the user’s store chain:

@tiendasorianamx Reply to @emaruiz_15 We found it! But you didn’t go out @Luis Gerardo López T ♬ Christmas Rockin – PromoBox

These are some of the comments on the video shared by Soriana:

“We want to see the guy in green!”, Mauricio Sosa

“Friend, why did they remove the boy in the green shirt? Victor Medina

“I refuse to go shopping in Soriana until I see the guy in green in the commercial”, Alan Hahha

“But what about the epic entrance of the vato?”, Carola Abigail

“If the boy in green is not there, there is no like and there are no purchases”, Ghostmau4546

Now, users ask the account to revive the video with the appearance of the boy in green, hoping that their pleas as consumers and users of social networks will be heard.

“What’s up with your design!”; surprises entrepreneur with Iron Man tortillas

“Only for doing evil”; explain how to get a free pizza from Domino’s

They exhibit racism in supermarkets in Mexico; “I prefer to go to the local market”

“We come for the promotion”; they rap at a McDonald’s branch and that’s how KFC benefits