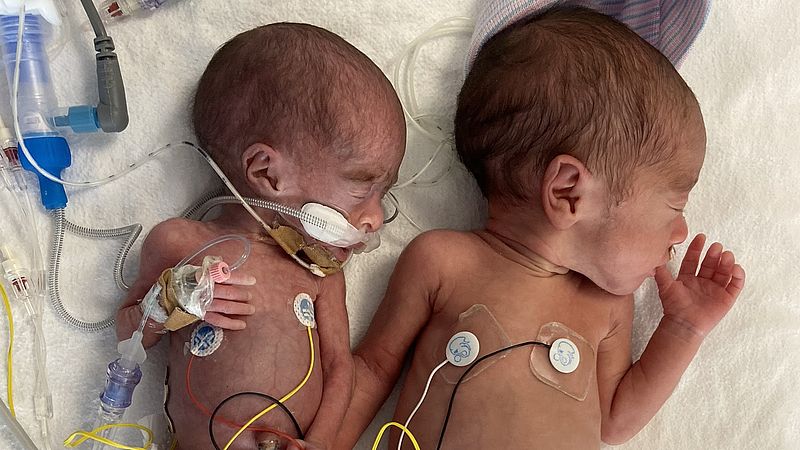 A baby who gets less nutrients in the womb than his or her identical twin siblings could endure problems for a lifetime: “It’s like one twin is living through the Hunger Winter while the other is in the Bahamas.”

Researchers at the Leiden University Medical Center have seen 48 pairs of twins, in which the placenta was unevenly distributed, years later. Due to the unequal distribution, one child was born well-fed, while the other was born malnourished. The research shows that this difference can have a lot of influence on the development of the smaller child later in life.

“We looked at identical, so genetically identical twins, in which this unequal distribution of the placenta played a role during pregnancy,” says Jeanine van Klink, child psychologist and researcher at the Willem-Alexander Children’s Hospital in Leiden.

“It occurs in 10 to 15 percent of this type of twin pregnancies. As a result, one baby is sometimes two to three times the size at birth than the identical twin brother or sister.”

Also during Nice Dossett’s pregnancy, the doctors discovered that her babies were not growing evenly. “It was my first pregnancy. I was 19 and was already very excited when it turned out to be twins. When it became clear that one was lagging behind in growth, it was of course extra worrying and stressful.”

After 7 months of pregnancy, the twins had to be delivered by emergency caesarean section. Two girls, who were both much too small, but also had a considerable difference in weight. “Gailleanne was the first to be born, she was very small at less than 3 pounds. But 1 minute later, Gaillenice came, and she weighed just over 1 kg. Still a lot smaller than her sister.”

And this difference in birth weight has long-lasting consequences: “After the exciting early days, the girls were finally allowed to get out of the incubator and go home,” Nice recalls. But now, 12 years later, differences in their development can still be seen.

“The eldest grew well right away, her sister was always a little behind in the first few years. At a certain point they went together, but now that they are both 12, I see a clear difference again. Gailleanne has really made a leap towards puberty. That has yet to come with her sister.”

It is not only physical differences that remain visible, says researcher Sophie Groene. “Before we started this study, nothing was known about the long-term effects of an uneven distribution of the placenta. Now we see that smaller twins develop differently in different areas.”

“Children who are smaller at birth, on average, score lower on various aspects of intelligence compared to their twin siblings. This can be, for example, working memory or verbal comprehension. They are also more likely to have mild developmental delay. small differences, for example a different school advice, but it can also turn out to be more serious, with more complex problems.”

‘She does her best, but has more trouble with school’

Fortunately, the daughters of Nice are not that bad, but the difference is still noticeable: “The youngest was always a little less healthy, she suffers from asthma and allergies,” she says. “And we also see cognitive differences. Gaillenice is doing her best, but has more trouble with school, she’s easily distracted and has to work really hard to keep up.”

“I think she is very strong and courageous, how she deals with her asthma, for example. And they also support each other enormously. ‘You have to take your medicine’, they say to each other. They are really twins. Always chatting together, and they do have two beds, but they still prefer to sleep together.”

The inequality in the distribution of the placenta cannot be resolved for the time being, emphasizes researcher Sophie Groene. “But we can provide tools for parents, children and treating physicians.”

“It is important to continue to monitor the development of these twins,” says child psychologist Jeanine van Klink. “Then you can identify any problems early and offer help and support quickly.”

Also many loners with growth retardation

And the research has another effect: “We have gained a unique insight into the mechanism of growth retardation and its influence on development,” says Groene. “The special thing is that the control group consists of genetically identical twin siblings. We can also derive a lot from this for singletons who are born with growth retardation, which occurs in about 10% of all births per year.”

More knowledge for other parents

Nice Dossett is also satisfied with her and her daughters’ participation in the survey. “At first we doubted whether we would participate when we were invited. What’s the point, it already happened? That’s what we thought at first.”

“But I’ve had so many worries, we had no idea what to expect. Now that we’ve been through everything, we want to give other parents more knowledge. In the end, I knew a lot intuitively, about the subtle differences and the extra worries about the smaller ones. twins, but now you also have the confirmation of what you already felt.”