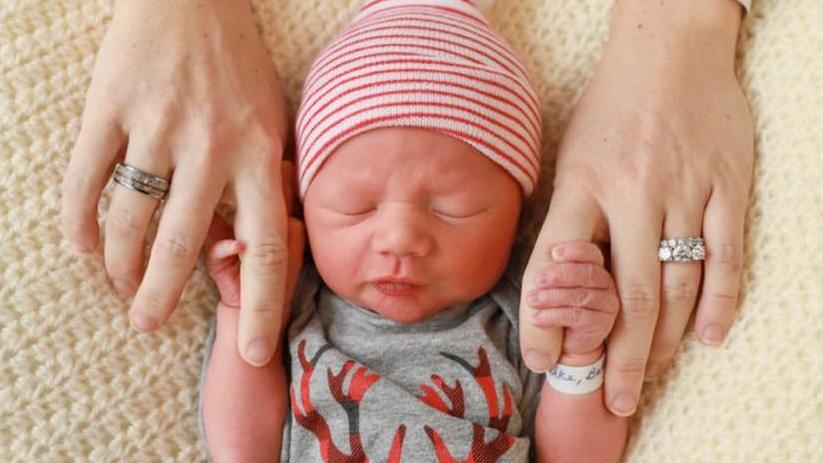 In order for John Brinton Parke to meet his son, his wife gives birth to the child earlier

Haley Parke gives birth to her second child on December 2nd. But the first meeting between mother and son is short-lived: shortly after birth, the newborn is brought to the cancer ward, two floors up. That’s where the proud papa lies – who only has a few days left to live. Despite the circumstances, fate enables John Beeson Parke, known as “Baby JB”, and his sick father to get to know each other.

The time together is only enough for 35 to 40 minutes

To enable father and son to get to know each other, 28-year-old Haley Parke from Connecticut (USA) gives birth to John Beeson Parke, known as “Baby JB”, by caesarean section on December 2nd. The namesake and father of the child, John Brinton Parke, who also goes by the nickname “JB”, has already been battling a rare type of kidney cancer for a year. Doctors prophesy: ​​The 33-year-old doesn’t have to live long. A quick decision is made: Parke absolutely has to get to know his son!

Opposite “Good Morning America” ​​the widow recalls the moment: “A nurse placed his newborn son on his chest. And from the point in time when ‘Baby JB’ was placed on my husband’s chest, we had about 35 to 40 minutes together. ” What a life together should be minimizes to less than an hour. The 33-year-old dies on the same day and, in addition to his wife Haley and “Baby JB”, also leaves behind another 18-month-old son named Brinton.

Reading tip: Back pain turns out to be cancer – wife warns after the death of her husband

“He wasn’t really ready to ever give up”

In 2016 the couple met at work. Haley Parke quickly falls in love with the former baseball player who worked for an airline company. Five years later, in January this year, JB Parke was diagnosed with cancer. At this point in time, the first son in the small family was just six months old. “He was a fighter. He wasn’t really ready to ever give up. He wanted to keep fighting for his family.”

But everything turns out differently than planned: Because Parke suffers from a very rare form of the disease, his left kidney will be removed in January. There is a malignant tumor the size of a ball there. In May, the 33-year-old American is undergoing chemotherapy and participating in a clinical trial. Haley and John Brinton decide to have another child. “Since the diagnosis was incurable, we decided to try again,” the mother of two continued. “We wanted to make sure that our first son had a sibling and that, we hoped, my husband would have more time with our second son.”

In April, Haley Parke becomes pregnant after an In-Vitro-Fertilization (IVF), by artificial insemination. Even if the sick JB Parke undergoes further treatments: the cancer simply does not want to shrink. “Pretty much every scan showed that the cancer kept growing and spreading all over the body, so nothing worked. We just tried to stay positive, not hang our heads and look ahead.”

On December 1, the Parkes received momentous news: Instead of the expected six months, the 33-year-old only had a few days to live. His pregnant wife is 37 weeks pregnant at the time and immediately asks doctors if she could deliver her baby earlier. Less than 24 hours later, Haley Parke meets her second son – and shortly afterwards has to say goodbye to her husband forever. Although “Baby JB” sees the light of day three weeks early, he is healthy and strong. Her newborn son is calm and calm, “just like his father”, whom the 28-year-old hopes will be remembered as a “selfless person”. “He was so pure with all his intentions and was just a very respectful and honorable husband,” she continues to tell “GMA”.

The fact that Haley Parke is now alone with two young children “doesn’t really feel real yet”. “The grief comes and goes, but it is also accompanied by the greatest joy about my new son and of course also about my oldest.”

Even if 35 to 40 minutes of time together will never be enough: John Brinton Parke was able to get to know his son, who from now on continues his nickname, at least for a short time. (vdu)