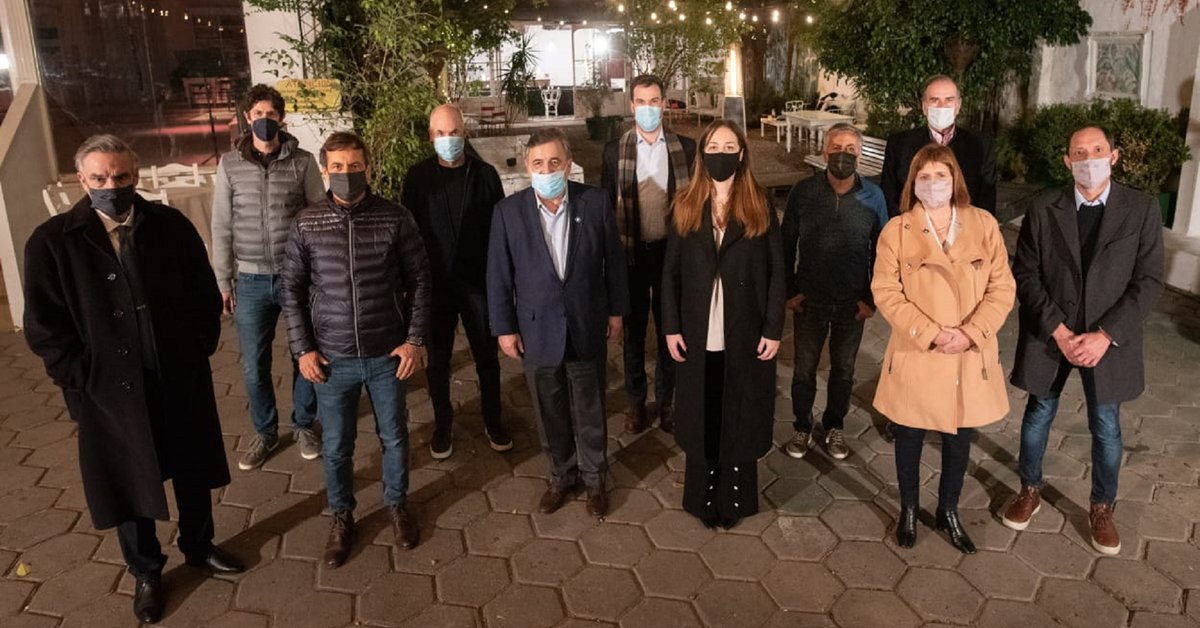 National table of Together for Change

The national board of Together for Change met again this Tuesday amid strong internal tensions over the candidacies and disputes over the opposition leadership. Among other points, They agreed on the objective of strengthening unity, expanding the coalition, and seeking to define the rules of the electoral front for the closing of the lists. They agreed to meet again in two weeks.

As he could know Infobae, the meeting passed “without any sizzle” and the opposition leaders reviewed the situation in each province. No particular candidacy was mentioned as “the realities of each district are different”.

“It was a very good meeting of political diagnosis, essential to advance in the electoral assembly with alliances in the provinces and trying to grow,” explained a UCR referent.

Among the rules that were set, special emphasis was placed on “Not avoiding competitions” between the different spaces that make up the opposition and also “letting those who come from outside compete.” For example, without putting electoral floors too high (they will be defined province by province).

From the Civic Coalition they detailed Infobae that the agenda was defined in advance and for that reason issues of the political conjuncture were not addressed. In that sense, they pointed out that the general attitude was “collaborative and constructive” and “without any type of tension.”

The opposition referents insisted on the idea that the PASO are the tool that can “order” the districts in which a broad consensus was not reached. They also asked that the inmates “be civilized” to avoid unnecessary wear and tear on some candidates.

For his part, the senator Martin Lousteau stressed the importance of expanding the coalition “with PASO everywhere” and He stated that “to show a possible economic course and for that it is necessary to make self-criticism of the management itself.”

Together for the Change also decided set up a work table made up of two representatives from each party that will report on the situation in each district and present it in approximately 10 days, ahead of the next meeting.

“The 2021 election is key for Argentine democracy because Kirchnerism today has the Chamber of Deputies as its only containment dam. We cannot allow them to take full control of Congress because society is asking for more freedom and more democracy, ”he said. Mario Negri after closing.

The meeting was held in person in Palermo and was attended by the head of the Buenos Aires government Horacio Rodríguez Larreta, the former governor Maria Eugenia Vidal, the president of PRO, Patricia bullrich, the senators Humberto Schiavoni, Martin Lousteau Y Luis Naidenoff; the deputies Mario Negri, Juan Manuel Lopez Y Maximiliano Ferraro; and the auditor Michelangelo Pichetto. Former President Mauricio Macri was not “due to a personal commitment that he already had on the agenda.” He had warned a few days ago that he would not participate.

The members of the national board of Together for Change met face to face for the second time after several virtual meetings during the first year of the pandemic. The first face-to-face conclave had been in April, where they agreed to endorse the postponement of the elections.

In the previous one, Horacio Rodríguez Larreta and Patricia Bullrich held a private meeting this Monday in which they agreed to tone down the internal confrontation. The former Minister of Security does not hide her intentions to head the ballot of candidates for national deputies. At the same time, the head of government is looking for alternatives so as not to give ground to the “hawks” of the PRO and studies the options to strengthen his presidential project. So far, the clearest alternative would be to compete with Vidal in the capital and Diego Santilli in the province of Buenos Aires. This set would give a centrality to his political project that Mauricio Macri and Bullrich would be willing to accept.

Days before, the internal tension had become public with a string of strong statements. The first to open the game was the former Minister of Security, who assured that the lack of definition on a possible candidacy of Vidal in CABA “does not help Juntos por el Cambio”. The sayings did not go down well with the Buenos Aires government and a few days later the former governor replied that this “is not the time to debate candidacies” and pointed out that it is a concern “of the leadership, not of the people.”

On the other side of General Paz, the mayor of Vicente López, Jorge Macri, also awaits definitions. His goal is to run for governor in 2023 and he seeks to stop Santilli’s landing in Buenos Aires. “I don’t know why we naturalize this idea of ​​Larreta, which at this point sounds like a whim to me, of wanting to cross candidates”, Shooting.

At the same time, the head of the UCR, Alfredo Cornejo, insisted that Mauricio Macri “is not the only leader” of the opposition coalition and relegated him to a role linked to “contributing to the unity” of space. “There is no single leader in Together for Change. There are several and no one who prevails over others. Neither Macri nor anyone. There is a much more horizontal conversation than the one in the Macri government, ”he clarified.

Before the meeting of the national table, the radicals also organized a meeting via Zoom in whichagreed on the need to strengthen the districts in which they do not have figures of such weight. In fact, they did not rule out contesting the PASO province by province “to make the party grow in the districts where it is not doing well due to lack of candidates.”

In a tense meeting, Rodríguez Larreta told Patricia Bullrich that Vidal will be his candidate in CABA
The internal burns: “It does not help us that Vidal competes in the Federal Capital”, assured Patricia Bullrich
Emilio Monzó: “Cristina Kirchner is the one who leads and that will lead them to lose the elections”