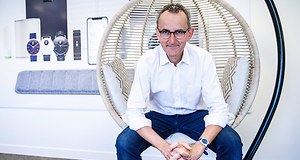 Withings is back in start-up mode. Two years after its resale by Nokia, the French manufacturer of connected health objects (scales, watches, blood pressure monitors, sleep recorders) has just obtained from several investors an envelope of 53 million euros to develop, especially across the Atlantic.

For Withings, it’s a new beginning. After selling his company to Nokia in 2016 for 170 million euros, Eric Carreel bought it for an amount of less than 30 million euros, with the desire to restore the image of a brand left fallow in the extensive portfolio of the Finnish group. At the head of a new management team, the serial entrepreneur has chosen to step up.

“When I took over the company, I had no idea of ​​raising funds again, explains Eric Carreel, co-founder and CEO of Withings. But the speed of the transformation of the health sector convinced me that it was necessary to go faster and stronger. “ If the coronavirus epidemic has somewhat delayed the signing of this fundraiser, it also confirmed the passionate engineer in his opinion. The need for precise data to follow the evolution of the disease has been sorely felt.

So far Withings had raised funds only twice, 3 million euros to start in 2010, then 23.5 million euros in 2015. Already involved in the last operation, bpifrance and IDInvest are now doing hui their return to the company’s capital at the same time as Withings welcomes Gilde Healthcare, a fund specializing in the health sector. The company keeps its new valuation as well as its turnover secret.

With its new resources, it intends to hire around a hundred employees in addition to the 240 who already work for it. Much of the new hires will be based in Boston, where the group already has an office. “The transformation of health begins in the United States because the health system is expensive and inefficient while patients and doctors alike are open to change”, describes Eric Carreel. Withings will in particular recruit salespeople to convince insurers and hospitals to use its connected objects for chronic disease monitoring.

In the immediate future, Withings is preparing the release of its next connected watch, the ScanWatch. Production issues in Asia this winter forced the company to postpone its launch until September. Equipped with a sensor measuring the level of oxygen saturation in the blood, it has nevertheless been used in French hospitals to detect infectious diseases such as Covid-19.

The confinement period has been rather successful for the start-up. Without being able to explain it, she says to have recorded an increase in her sales to the tune of 50%, thanks to online sales.

Withings will also continue its R&D efforts. Fervent defender of what he calls the product / service / health triptych – a connected object makes it possible to create a service which itself creates data that will be used to improve subsequent versions of the device – Eric Carreel promises the upcoming commercialization of new home health devices. Without giving details for the moment.