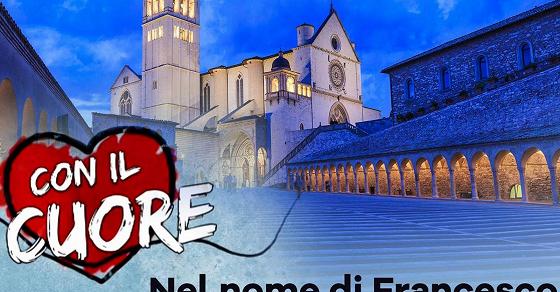 From the square in front of the Upper Basilica of San Francesco d’Assisi, on Tuesday 8 June, at 9.25 pm, live on Rai1 and Radio1, Carlo Conti, with the exceptional participation of Renato Zero and Massimo Ranieri, conducts the charity evening of solidarity of the Friars of Sacred Convent of Assisi. Now in its nineteenth edition, the solidarity event “With the Heart in the Name of Francis” is promoted by the Friars of the Sacred Convent of Assisi, who organize a charity marathon every year and ask all men of good will for help. for the most disadvantaged and needy people. This year the solidarity intent is to help the Franciscan canteens operating in Italy, but also the many Italian people and families who, due to the health emergency due to the Covid-19 pandemic, have suddenly found themselves in difficulty and forced to live in difficult and precarious economic conditions, but also to give support to the many Franciscan Missions operating in all continents.

The 2021 edition of “Con il Cuore – Nel Nome di Francesco” includes the extraordinary participation of Renato Zero and Massimo Ranieri: the two great artists, special guests of the evening, will perform their most successful songs even live with their bands and have chosen this classic and usual television event dedicated to solidarity to support fundraising for the most needy Italian families and the many humanitarian projects of the Friars of Assisi. It will be a unique evening of music, storytelling and solidarity, which will combine entertainment, culture and spirituality and will also see the participation of many witnesses of solidarity and civil, medical and religious fraternity. Also this year “Con il Cuore nel nome di Francesco” will be broadcast live on Radio1 simultaneously with the conduct of Gian Maurizio Foderaro and Marcella Sullo, and will be broadcast in rerun on Sunday 13 June, at 5.20 pm, again on Rai1 .

It will be possible to support the solidarity campaign of the Friars of the Sacred Convent of Assisi with text messages and landline calls to 45515 until next June 30th. The value of the donation will be 2 euros for each text message sent from WindTre, Tim, Vodafone, Iliad, PosteMobile, Coop Voce, Tiscali mobile phones. Or the value of 5 or 10 euros for calls from the fixed network Tim, Vodafone, WindTre, Fastweb and Tiscali and 5 euros for calls from the fixed network Twt, Convergenze, PosteMobile.

“With the Heart, in the name of Francesco” is a program by Carlo Conti, Emanuele Giovannini, Ivana Sabatini, Leopoldo Siano with the collaboration of Eleonora Niccoli. The direction is by Maurizio Pagnussat, the scenes by Marco Calzavara, the photography by Fabio Brera.

READ  She once turned away from music for a harmful partner