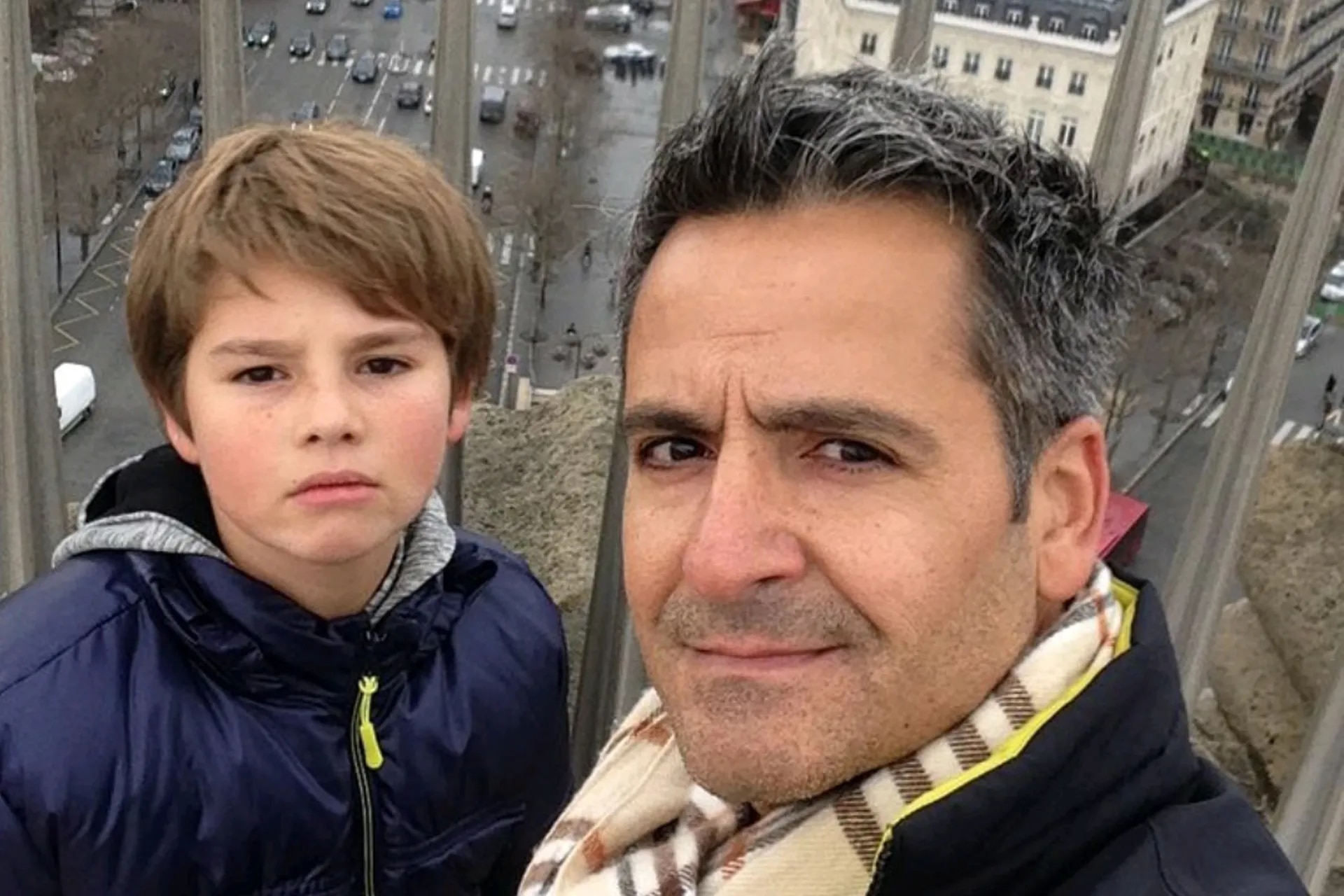 With stable income and employment, he lived in 8 countries and always returned to Argentina until he got tired: “This is not a country, it’s a trap”

His situation was stable both economically and professionally.. He had been working as a senior specialist in the Human Resources department of the United States Embassy in Argentina for four years. From his position, he had achieved several objectives: improve benefits for local staff and that salaries were denominated in dollars but paid in pesos in local accounts at the official rate.

But he also confesses that working at the embassy was very frustrating at times. “Studying the Argentine labor market, positions and salaries, the Embassy was very well positioned. But the nature of the Argentine is always to complain. In short, it was a good experience but tiring because of the internal client that had to be content”, recalls Maximiliano Gil (52).

Also in the last two years felt and verified that Argentina was in a tailspin. In every sense. “The loss of values ​​and social cohesion, the destruction of the social fabric became more evident to me every day. There is a war of all against all. There are no rules, there are no values. There are liberated zones, where life has no value. The poor people are at the mercy of having the good luck of power arrives at your house vivo every day. Naturalize abnormality is terrible, because it leaves no spaces for anything. Life itself is put into play on a daily basis -already anywhere, in broad daylight-. And she didn’t want to live through that.”

Raised with a suitcase in hand, Maximiliano knew from his early years life outside his country. His father, an expatriate for transnational textile companies, had been appointed on different occasions to fill positions abroad. Puerto Rico, Portugal, London, Malta (Valletta), the United States and Spain were some of the places where he lived and studied. When he started high school, his parents divorced and his mother chose to return to Buenos Aires. “I was 15 years old and for me, Argentina was an unknown country. In fact at school they told me the Galician. Then, once I finished high school, I went to Costa Rica (San José) for a year, back to the United States (Miami) for about nine months, and then between trips to London (my second home) where I lived a total of more than six years”.

His time at university had been somewhat tortuous. In private institutions he could not settle. He started to study and already in the first semester, he dropped out. Until one December 31 at the age of 24, he was gripped by the despair of thinking that he had not finished a university degree and that his classmates were about to graduate. “I think that idea and that of a future -without a future-, made me reconsider and decide to study. I promised myself that he would finish his degree in five years, no matter what it took. So it was. I had taken it very seriously. At the age of 30 I finished my degree. He obtained a Bachelor’s degree in Labor Relations from the University of Buenos Aires.

During those study times he met the one who later became the mother of his son. They were received the same day and, in 2001, they decided to try their luck in the United Kingdom. Maximiliano’s brothers had settled there since the 1990s. At that time he did not yet have European citizenship, so he thought that he was not in the best of situations. Only in 2004 was he able to complete all the paperwork. But by that time, the couple had already returned to Argentina.

back in his country, Maximiliano bet, once again, on academic training. In 2011 she studied the Master’s Degree in Social Sciences of Labor, also at the University of Buenos Aires. As a thesis topic, she addressed highly-skilled migrants returning to Argentina. To do this, she did a small case study where she compared those who returned with those who stayed in England. Part of her fieldwork included traveling to England to interview those who stayed behind. All of them with doctorates, most of them teaching at universities.

“Seeing the contrast also led me to rethink my own story. In migrations there is something called Ulysses syndrome, which is the one suffered by nomads who are in continuous movement. They do not truly feel part of any place. For them -for me-, they are not places (in the words of Marc Augé). They are places where you are passing through, devoid of identity and belonging”.

That is why he later decided to complete his training with a Doctorate in Social Sciences (UBA) on the trajectories of expatriate Argentine managers who work in transnational organizations in Argentina. A cosmopolitan, mobile elite that has certain skills sought by transnational corporations to maintain an active pool of mobile talent. And as time passed and he delved into the investigation, he felt more and more identified with a phrase of St. Augustine from the fifth century in his work Confessions: The world is like a book, and those who do not travel, read a single page. Until that moment, Maximiliano had lived more than twenty years in eight countries and ten cities abroad.

However, despite the experiences, something made him return, again and again, to Argentina. “I think it is Precisely what Argentina has is something atrocious in the daily life and something charming in its nostalgia. But lately I grew up”. The last two times that he returned, he assures that it was because his son (now of legal age) was still small and his fears of future claims made him come back to be present.

He concluded that “the country is an invention. My words can be very angry, they can be reprehensible, but it is my experience. I am not a new migrant or they told me. Since I was a child I learned that there is a better world, another possible world where the daily life becomes more bearable. The only thing I am grateful to Argentina for is the quality and accessible university education it gave me. Still, wanting to give back some of it and having tried twice, they slammed the door in my face. I would have gladly taught pro bono. But no, the Faculty of Social Sciences is a closed circle that promotes militancy more than the academy. It was a great disenchantment. Still, I am grateful to have obtained the credentials that I obtained thanks to open access.”

He then realized that his desire to leave the country forever had been repressed, although latent in his DNA.. What’s more, he remembered that his father -who had lived in so many countries- didn’t like Argentina. She seemed violent, hostile, aggressive. “Like me, I was convinced that it is a place where ideas are not debated, but where the objective is to destroy the other. Consensus is not sought, but personal benefits. Even in countries like Costa Rica, one can find another quality of life. The more he grew, the more aware he was that Argentina is an eternal downhill. It may be a little better for a little while, but inevitably, due to the Argentine idiosyncrasy, we know that it changes its government and returns to undo what the previous one did (because you have to destroy everything that the previous government did well no matter what political flag have). Everything is personal. There is a need to destroy those who dissent, a mania to eliminate them at any cost…”.

Quitting your job and choosing Barcelona, ​​Spain as your new place of residence was completely liberating.. After having moved more than thirty times from home, to eight countries and eleven cities (including Buenos Aires), he says that -although everyone lives the move as a traumatic experience, for him it was liberating.

Why Barcelona among so many other options? He believed that by being a professional, speaking languages ​​and having international experience, he would be able to compete in a growing job market. “Just the data for the month of July indicate that unemployment rose by 1,200 people in the city of Barcelona. In June the data was 59,400 people and now it rose to 60,600. Even so, it continues to have lower rates than the rest of the autonomous communities”.

Maximiliano feels that the city has treated him very well since his arrival. Public service employees are very helpful. “Maybe I was lucky but all I needed was pretty quick. In a few days it will be six months since I arrived and I feel like I got used to it pretty quickly. It lives at another speed. Sometimes a weekday looks like a Saturday.

Your place of work, City Council of Catalonia, is literally 700 meters from his flat, in Gloriés, near the Agbar tower. She gets up at 6 am, walks her rescue dog Homer 2 km, comes back, showers, changes and goes to work. It is open from 8 am to 3 pm Monday through Friday. He works in the Economics and Industrial Promotion sector, in the Department of Economics and Statistics Studies. There they make several products with macro data oriented to different audiences. He is more focused on the labor market and monitoring of indicators such as unemployment, affiliation to social security, type of contract, by neighborhood, by economic sector. On weekends he goes to the beach, yes, early because in summer he looks like La Bristol. He also frequents Glories Park in a deck chair to read.

Without fear of being wrong says he gained peace of mind and quality of life. “One realizes how bad it is to live in Argentina when you leave. And the same thing always happened to me, every time I left. I hope I don’t have to go back to the country. It would happen to me like Ulysses who, after wandering for ten years until returning to Ithaca, I think that in six months I would no longer recognize what I once lived there. And I also don’t want to. As Luppi well said, that’s not a country, it’s a trap”.

If you had an experience that improved your well-being and quality of life (it can be medical, nutritional, sports, a trip, sentimental, professional or of another nature), and you want to share it in this column, write to [email protected]