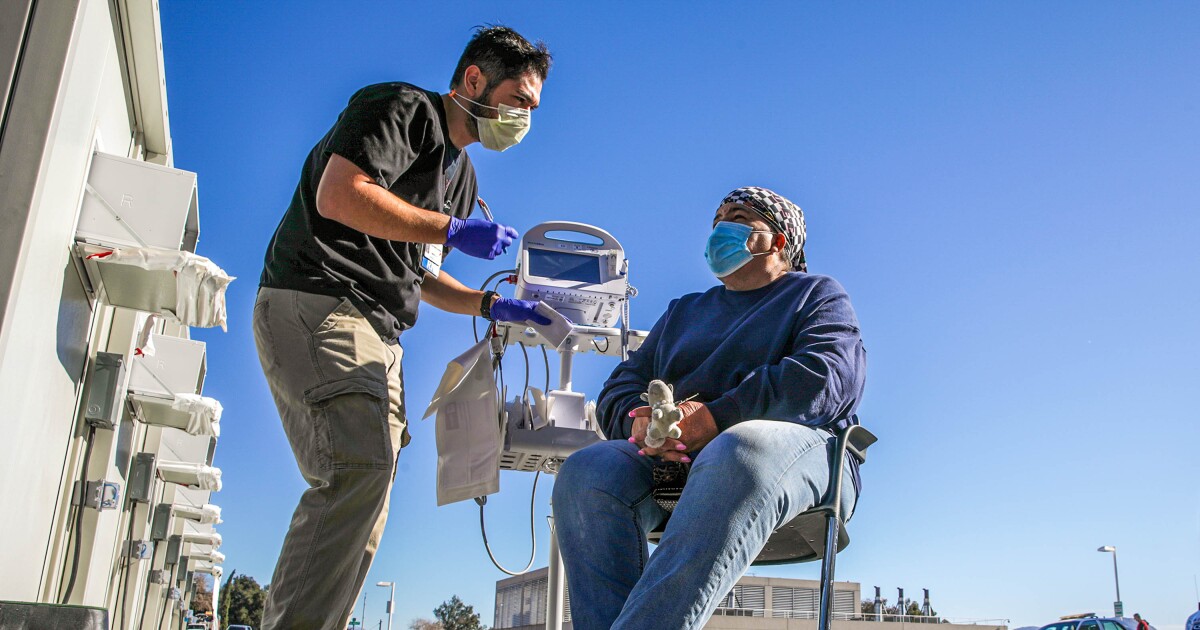 On a single day this week, 616 employees declared themselves ill with COVID-19 at Tufts Medical Center in Boston. Without nearly a tenth of its workers – doctors, nurses, administrators and janitors – the hospital assigned the National Guard to help with a relentless flow of patients, many of them in critical condition.

These scenes across the country have been brutal, as the highly transmissible – though less deadly – Omicron variant has set a record of nearly 2 million cases of infection each week.

This wave has hit healthcare systems, sapped the morale of doctors and nurses, delayed thousands of operations, postponed treatments for life-threatening diseases like cancer, and turned hospitals into 24-hour emergency centers, where nerves bristle and anger echoes alongside despair.

The daily bustle of rising infections has left virtually no part of the United States untouched. It has changed the way we think about the virus, the sick, and the medical communities in cities and towns that are barely coping with the pandemic as it approaches its third year.

Before, masks and respirators were in short supply; now, they are part of the staff. Front-line workers used to end their shifts by walking out of hospital doors to the sound of pot banging and cheering. Today, many are fatigued and some even angry as a sea of ​​unvaccinated Americans seek treatment.

In large cities, hospitals report hundreds or thousands of workers ill from COVID-19 each week.

Projections suggest that Ómicron may decline in the coming weeks and months. But for now it’s wreaking havoc: This week, COVID-19 hospitalizations have surpassed last January’s record of 132,051. Ómicron has essentially changed the game, as if a storm has rearranged the landscape.

The constant flood of patients – and the inability of many hospitals to care for them – is testing the patience and compassion of doctors, nurses and other healthcare workers.

Of the 24 beds in Dr. Jason Chertoff’s unit at Genesis Hospital in Zanesville, Ohio, a city of 25,000, four are locked and empty because there aren’t enough nurses. Almost all the patients are there with COVID-19, and Chertoff said most will die because they only have one ventilator.

“I am used to it, but I also feel fatigued. Before COVID, what he did was treat people with lung cancer. I never felt anything bad towards them if they were smokers, ”said Chertoff, 43.

“But what I don’t like is what I feel now. I have resentment and anger towards patients who are not doing their part to stop the spread of this. I need to put that aside and serve people regardless of their decisions. That’s my job. But, boy, is it difficult ”.

Ariana Cellini, a nurse who works 12-hour shifts at Tufts’ intensive medical unit, shares the sentiment. He lives with his parents and his grandmother, who has Alzheimer’s and diabetes. She still takes off her robe at the entrance of her house and does not hug or kiss her grandmother.

“At the beginning, there was a lot of morale in those of us who worked on the front line,” he says. “Later, when people did not get vaccinated or said it was a hoax, many of us got angry. Now, we are desensitized ”.

Like most of a restless country that wants to move beyond the coronavirus, especially as vaccines were rolled out last year amid a sense of return to normalcy, hospitals were quick to recall the inventiveness and staying power of the coronavirus. virus.

It has tested the limits of what hospitals can do in the face of a widespread and sustained threat, complicated by testing problems, uneven government policies and a population in which 27% of adults remain unvaccinated.

Ómicron has proven to be less lethal than previous variants, but its rapid and widespread transmission has presented dangers that hospitals and doctors have rarely faced: “There are too many infected employees,” said Doron. “Our infection curve among staff right now makes all the previous waves look like a joke.”

At his hospital and in other states like Georgia, Maryland, Delaware and Ohio, the National Guard has been called in to reinforce staff. In rural regions where Ómicron took the longest to arrive, overloaded small hospitals are rehiring temporary nurses and transferring patients to cities due to lack of beds.

Today, those offering them are changing schedules as routine surgery patients test positive. Some of the worst-hit sanitariums are once again serving solely as COVID-19 emergency treatment centers.

In California, staffing shortages have led to an emergency policy that allows hospital workers who test positive for the virus to return to work immediately – without the need for isolation or additional testing – if they do not show symptoms.

The California Department of Public Health put this rule in place when hospitals near capacity, and has told employers to make sure those workers wear masks and are assigned to work with patients who are already infected.

In Arizona, the leaders of Banner Health, the largest health system in the state and one of the largest in the country with its 30 centers, warned this week that the worst was yet to come. The state has repeatedly broken records for daily cases, with 18,783 new cases registered Wednesday.

“Nearly a third of our inpatient beds are now occupied by COVID or suspected COVID patients,” said Dr. Marjorie Bessel, Banner Health’s clinical director, at a news conference this week. “About 90% of those COVID patients are not vaccinated.”

Beds in intensive care units, meanwhile, are more readily available than during the peak of the Delta variant.

In the Northeast, the first American region hardest hit by the current surge, hospital administrators said current challenges bear little resemblance to those that arose when the virus first appeared 22 months ago.

“We’re struggling to get by,” said Doron, an epidemiologist at Tufts.

Diana Richardson, the hospital’s chief operating officer, said a flood of patients delaying treatments early in the pandemic has made things even more difficult.

An administrator at Yale-New Haven Hospital in Connecticut, Dr. Maxwell Laurans, compared the situation to “a Tetris game that seeks to accommodate all these patients and employees in the available spaces.”

Laurans supervises 1,250 employees in the hospital’s surgery division, where cardiac, orthopedic and cataract procedures are common. These types of operations were delayed during the first wave. Now they are postponed again, but for a different reason.

“Every day there are dozens of operations that we have to postpone because the patient tests positive,” he said.

Plus, there’s the staff. “We were already facing a shortage of workers before the pandemic. Now, we are faced with a significant number of them testing positive. On any given day, we have to redeploy 5-10% of our staff to another area to meet clinical needs. “

In Ohio, where hospitalizations have reached record highs and about 56% of the population is vaccinated, rural hospitals are under a huge burden. Chertoff, who works the night shift at the ICU and is a lung specialist at Genesis Hospital in Zanesville – nearly 55 miles east of Columbus – said lack of vaccination remained the biggest health threat to communities like the one he serves. .

The county he works in, Muskingum, is below the state average, with 47% of its residents vaccinated.

“Lack of receptivity to vaccines. There is great resistance, ”Chertoff said. “Normally, when you see someone, you immediately realize that they are not vaccinated, because of the severity of their symptoms. It is a great impediment for people to get well and to prevent the spread of more serious cases ”.

If you want to read this article in English, click here.