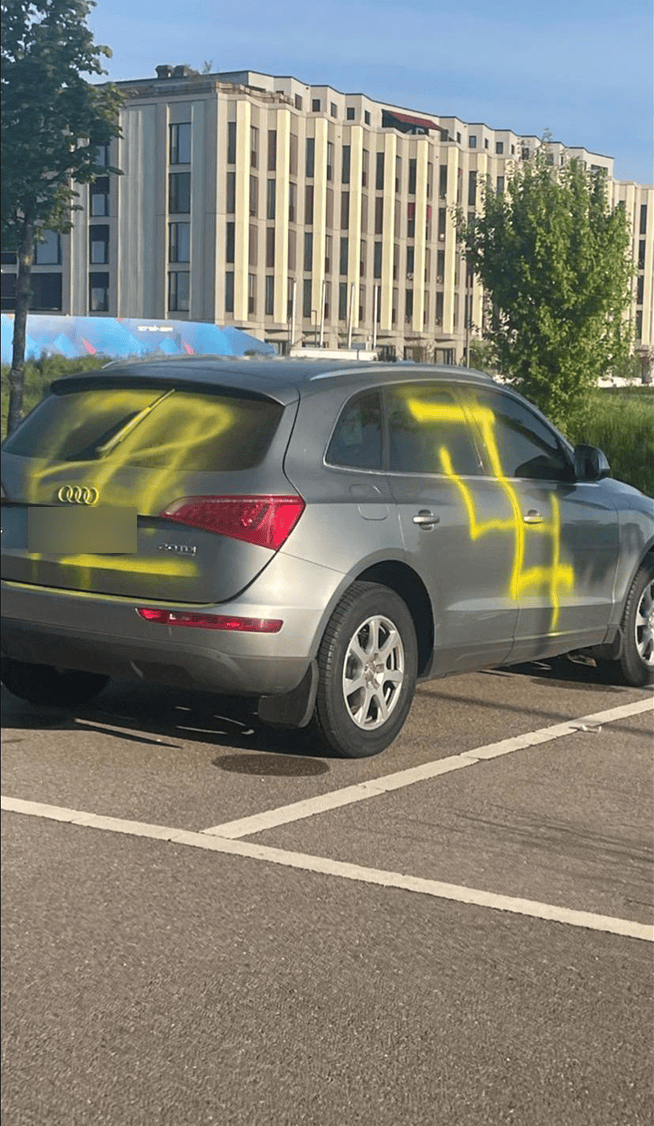 In Winterthur, strangers smeared a Ukrainian car. The Racism Commission condemned the crime.

An Audi with Ukrainian license plates sprayed with a swastika and “Z” symbol was parked in a parking lot at Hegi train station in Winterthur on Tuesday morning. The “Z” is a symbol of the Russian invasion of Ukraine. “I am shocked and have no understanding for such an action. I really don’t understand who does something like that,” says a 30-year-old woman from Winterthur.

Sreten sees it similarly. The 23-year-old discovered the sprayed car on his way to work, he says. “I find it incredible that Ukrainians in Switzerland are victims of political propaganda and feel neither safe nor wanted in these difficult times.” As the Winterthur city police said on request, no reports have been received so far. The police are not aware of any similar incidents.

“It is clearly aimed at Ukrainians”

“This act is very frightening, extremely reprehensible and worrying. It is clearly aimed at Ukrainians,” says Giulia Reimann, Scientific Associate at the Federal Commission against Racism FCR. According to Reimann, those affected can file a complaint against unknown persons with the police or directly with the public prosecutor’s office. “From a legal point of view, criminal liability for discrimination and incitement to hatred, defamation, threats or damage to property can only be considered,” says Reimann.

Symbols such as the swastika or the Z symbol are not punishable per se in Switzerland. However, their use could be punishable if a racist ideology is propagated. “In addition, the use can also be punishable if a group of people is disparaged because of their ethnicity in a way that violates human dignity,” says Reimann. The prosecuting authorities would have to examine the latter in the present case.

The “Z” appeared on Russian tanks advancing towards Ukraine at the end of February. The Russian military equipment was probably marked in this way so that the soldiers could distinguish it from Ukrainian ones. It is unclear whether the Latin letter has any other meaning. One theory says that it could be the first letter of the word “Zapad” (“West”). This could mean the direction of movement of the troops or that the tanks are from western parts of the country. Some also see a nod to Ukrainian President Volodymyr Zelensky, whose surname is transliterated with a “Z” in many languages.

In Germany, the use of the “Z” symbol is being pursued in some cases

Anyone who wears the “Z” symbol in Germany faces up to three years in prison or a fine: the federal states of Lower Saxony and Bavaria are taking action against the use of the symbol, which the Russian army used to mark its vehicles and tanks during the Ukraine war . The authorities announced in March that the public use of the symbol in Germany, for example at demonstrations, is punishable by law.

In Lower Saxony there have already been “corresponding observations”. Lower Saxony’s Interior Minister Boris Pistorius (SPD) explained that anyone who uses the “Z” symbol to publicly express approval of Russian President Vladimir Putin’s war of aggression against Ukraine must expect criminal consequences in Lower Saxony. Bavaria’s Minister of Justice Georg Eisenreich (CSU) also warned: “Sympathizers who publicly use the symbol ‘Z’ of the Russian armed forces in Bavaria” could be liable to prosecution for approving criminal offenses.

The basis for the actions of the federal states is paragraph 140 number 2 of the German Criminal Code: According to this, behavior is punishable if it is to be understood as publicly flaunted approval of aggressive wars and is likely to disturb public peace.

are you or is someone you know affected by racism?

GAME, S.foundation against racism and anti-Semitism

are you or is someone you know affected by antisemitism?

GRA, Foundation against racism and anti-Semitism