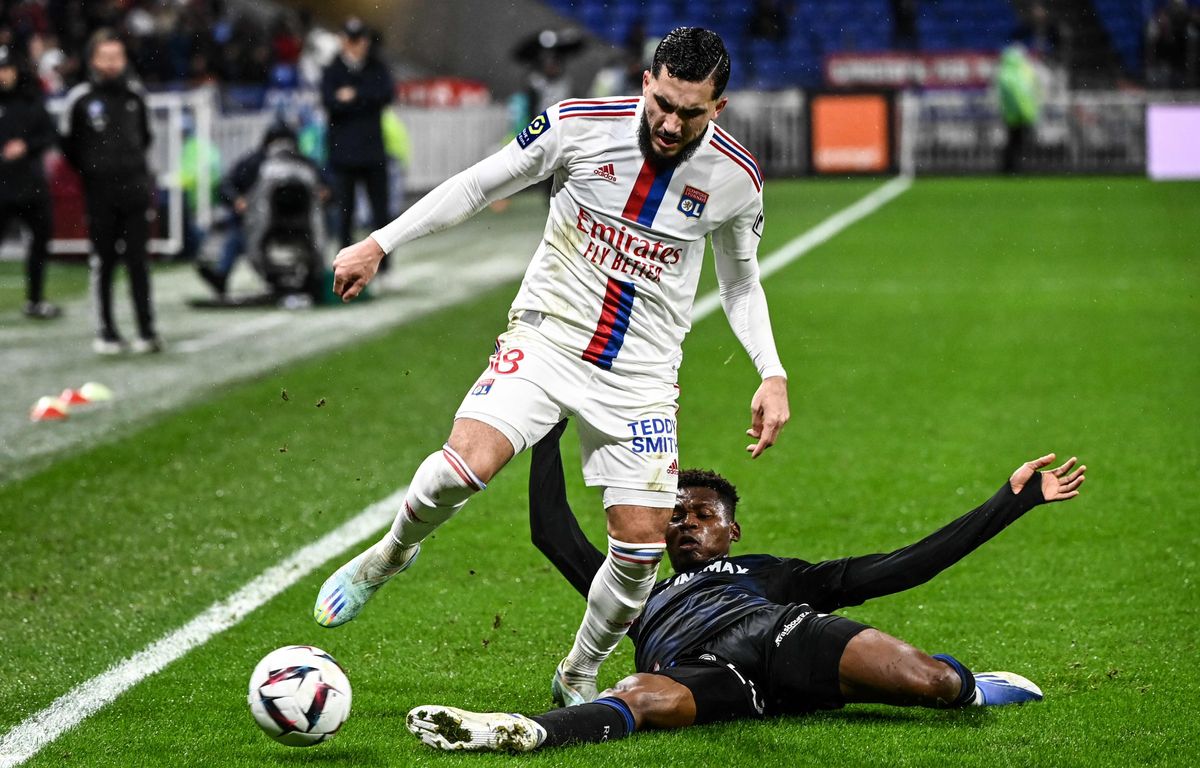 Will OL be worried in the Coupe de France by an N3 club?… Follow the match with us from 3 p.m.…

5:32 p.m .: Come on, we’ll leave you there. The Lyonnais were a bit reassured, and Rayan Cherki and Bradley Barcola certainly scored points in this match in the eyes of Laurent Blanc. We hope so in any case, because the light has often come from them today. Thank you again for following us and have a great evening. Kiss.

17h25 : Alexandre Lacazette reacts on beIN Sports: “We should not fall into the trap of saying that it was a small team opposite. We want to win this Coupe de France. I hope we are on the right path”.

5:22 p.m .: It’s over here! OL did the job in my opinion, even if Chambéry sometimes jostled the Lyonnais in the game, especially at the start of each half, which is a bit of a stain against a team of N3.

90e+3 : Oh oh the pretty little bridge of little Hdoubane, it was not bad at all, from the young player from Chambéry.

90e : 4 minutes of additional time here, and much more suspense, except that we expect a goal from Nassim Akrour here.

87′: Tetê does not fit his shot, after a nice job by Cherki and Lacazette.

83e : Well, there’s not much more to tell in this end of the match, which was quite peaceful for OL (normal, you might say).

79th: Pfiouuuuuu the crazy bite of Moussa Dembélé and more. He was totally alone, on a high recovery and a good serve from Kumbedi. Decidedly, he is no longer there at all in Lyon. Very curious to see the superb club he will join next summer. In your opinion, more or less prestigious than Shabab Al-Ahli that Jason Denayer joined free last summer?

75th: Unsurprisingly, Dembélé then Aouar come into play under the whistles of the turns. And yes, the two heroes of “Final 8” will leave free in four months. A posteriori, OL left 70 million euros (minimum) on the way by not letting them go during the summer of 2020. Can you confirm, JMA?

67th: Oh yes yes yes Barcola! Festival of dribbles and caviar for the hat-trick of Lacazette!

This number of dribbles by Bradley Barcola between Viard and Braillon, from the left wing, was still something there. And behind, he has the lucidity to serve Lacazette well behind. What an afternoon for the Lyon captain: three hit-and-miss goals, where all he had to do was push the ball deep, a few meters from the Savoy goal.

65th: Otherwise, after what we are seeing, is there really a Lyon supporter/observer who finds Karl Toko Ekambi light years away from the level of little Bradley Barcola?

62e : And yes, there is the event: entry into play of Nassiiiiiiiiiim Akrour for Chambéry. The foal is 48 years old, need we remind you. We let you read the subject that we devoted to him when he was starting to break through, at 44 years old.

61st: What a shot from Cherki’s right from just above. Daniel Bravo discovers that he has both feet on this occasion (January 21, 2023 therefore).

Chambéry had still played very well on a counter-attack, but Scarantino got tangled up when concluding, what a pity.

52nd: Théo Blachon will actually be spotted by a pro club!

Another great save from the Chambéry goalkeeper, on a strike this time much less “Aouarian” from Tetê. He spins quickly to the ground the guy, take some seed Fransesco Toldo (do you have it?).

51st: As in the first period, Chambéry attacks without the slightest complex. The Savoyards arrive in large numbers in the area.

After almost a year in Lyon, it’s still a little hard to decide on the Brazilian. It has qualities, but we are not able to be as enthusiastic as after its first outings. The OL effect, which very quickly sucks down its recruits, right? Hello Romain Faivre, by the way.

4:17 p.m .: Here, interesting statement by Dejan Lovren during the break at the microphone of beIN Sports: “It’s complicated when everyone wants to make 5-6 touches of the ball. We need to play faster and change our mentality”.

45th: Half time here! It obviously remains to be put into perspective against an N3, but OL gradually gained momentum, and showed a lot of quality in their attacking animation, which is rare enough to be underlined.

42nd: Dangerous tackle from Tagliafico, who logically takes a yellow

Cherki Festival, which then shifts its captain and poto Lacazette. Behind, Blachon is super solid to prevent this match from being completely folded.

36th: Pfiouuuuuu, what a parade of Lopes!

He really had to work on a Savoyard strike at the entrance to the surface. Behind, Tagliafico is huge, in warrior mode, to ward off danger by tearing himself away. Lopes raged against his other teammates, who put much less intensity to prevent Chambé’s attack.

It’s simple, it’s the color copy of the first, with Cherki in charge, and a good Tetê to slip it back into the race of a Lacazette who only has to push it to the bottom. And as before, we can have a little doubt (less than on the first all the same) as to a possible offside position of Lacazette, perhaps slightly advanced compared to his partner. But we have few slowdowns, and there is no VAR. Well, 2-0 is folded, right?

29th: Very nice little ladle from Cherki (who has lost several balls so far on difficult dribbles) for Barcola. The shot from the young OL striker flies away.

The Lyon defender intervenes on the attempt very close to Fortier. It was a little hot that, Chambéry is really not bad in this first period.

23e : Sacred breakthrough of Kumbedi, he definitely has sacred qualities of speed this kid. He gets a corner at the end of his rush.

Brazilian Tetê had a big break point there. Even if there seemed to be offside (no VAR in the Coupe de France), he found himself in a one-on-one with the Savoyard goalkeeper, and stumbled on him, before then falling on a well-placed defender on his line. Chambéry is less well there.

Nikola Volic releases a nice long shot from the left. No worries for Anthony Lopes, but Chambéry doesn’t seem stunned by this first goal.

Well in the hard until then, Lyon signs a perfect movement, with Tolisso in charge at the start. Cherki inherits the ball and slips a superb masked pass to Tetê, on the verge of offside. Then perfect cross from the Brazilian and Lacazette (also at the limit) concludes quietly.

9th: What a parade from Blachon on a whim from Diomande. OL finally seem to be reacting.

See also  A family murdered in North Carolina: the police have just identified the perpetrators of this 50-year-old case - 7of7

6th: What an opportunity for Chambéry on a corner!

Fortier is arch alone at the far post on this Savoyard corner. He crushes his head, a little off balance, but there was better to do. One thing is certain: OL are not there.

5e : Wooooh, OL are really eaten up at the start of the match: Mendes saves a hot ball in the area.

4e : It is bleeding this Alexis Matias on the right side. He causes a foul from Kumbedi. The start of the match is in favor of Chambéry.

3e : Well the first “thrust” is Savoyard, with a good movement concluded by a cross captured by Lopes.

3:25 p.m .: Come on, it’s going to start nicely, rather nice atmosphere on the stands side, nothing to do with the one against Strasbourg a priori.

3:15 p.m. : Side Chambéry, Nassim Akrour starts on the bench

Laurent Blanc put together a supposedly solid team, taking Chambéry very seriously. As the main curiosity, we will want to see Bradley Barcola, scorer in the previous round against Metz (2-1), and who could benefit from a probable departure from Toko Ekambi this winter.

We are going to make you live this 16th final of the Coupe de France a priori unbalanced, on paper in any case.

8:30 am: Hello friends, does the magic of the Cup threaten OL?

Hello Minutos! Normally, the question should not even be asked, and even less after the Savoyard leaders preferred to give up the organization of this 16th final of the Coupe de France in Chambéry. But there, frankly, given how everything is going upside down in OL’s season, even when they play a rather coherent match like against Strasbourg (1-2) last week, we feel ready to sell you a semblance of suspense. And if even the 5th of his National 3 group could start to believe it, given the deleterious climate which is in the air between the band of Alexandre Lacazette and the bends of the Parc OL? Let’s not forget that Chambéry SF can rely on a renowned early striker, the excellent Nassim Akrour (48). See you later !