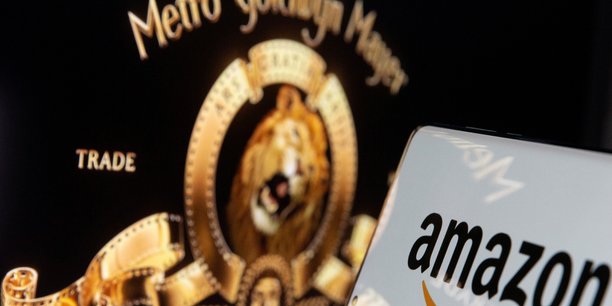 The merciless war waged by the world leaders in video on demand reached its climax with the acquisition of the legendary Hollywood studio MGM (Metro Goldwyn Mayer) by the giant Amazon, on May 26, during a transaction s’ amounting to $ 8.45 billion.

The sale of MGM came after more than six months of negotiations. The American studio, symbolized by a “roaring lion”, was already weakened by significant financial difficulties before the pandemic and the prolonged closure of cinemas dealt it a coup de grace.

Despite the low market valuation of studio MGM (estimated at only $ 5.5 billion a few months ago), several giants of the digital industry, including Apple, were interested in its takeover. But it was Amazon that won the day and made history by becoming the first player in the video streaming industry to acquire a major Hollywood studio.

Amazon thus clearly displays its ambitions to dethrone Netflix. The Prime Video service already has nearly 200 million users, closely following the Californian company with its 208 million subscribers. The race for the top spot in the video-on-demand market has never been so close.

Our research interests relating to discoverability and access to a diversity of online content encourage us to regularly monitor the transformations and imbalances caused by the digital distribution platforms that control the global market for cultural goods and services. .

In the era of multiplatform consumption, the most effective way to stand out and seduce an audience in constant search of new products and a variety of choices is to expand and regularly renew its catalog. Investing in the acquisition or production of original content is becoming an important weapon in the war of exclusive content between platforms.

The platform that cannot offer enough and fast enough content to gain and retain subscribers will not be able to compete with its competition. Moreover, the Wall Street Journal observes that the acquisition of MGM constitutes an admission of the difficulty Amazon had until now to produce enough content to meet the demand of subscribers to its Prime Video service.

READ  PHOTOS: An Argentine delivery man is surprised to discover how much he has earned in tips

In the gigantic video club that the Internet has become, we can no longer rely solely on the quality of the catalog as Apple does, for example, with the Apple TV + service. In the eyes of subscribers, the number of titles available now acquires as much, if not more, importance than the quality of the content offered.

Amazon therefore seizes a real treasure to enrich its catalog, by obtaining the exclusive intellectual property of 4,000 feature films (including Thesilenceofthelambs, Hobbit, The Wizard of Oz, Rocky,Terminator, The pink Panther, and the entire James Bond saga). To this must be added around 17,000 MGM television programs, with star series such as Stargate, Vikings,or The scarlet maid. This catalog contains cinematographic works that have won more than 180 Oscars and 100 Emmys.

In addition, the exponential growth in revenues generated by e-commerce and the use of cloud computing services in the context of the pandemic have enabled Amazon to triple its profits in 2020 and experience a 44% increase in its turnover. business over one year.

These results thus leave it a very comfortable margin of maneuver to invest nearly 11 billion dollars in the production of original content. Amazon thus increases its offer by almost 40% compared to the previous year. She also invested nearly $ 465 million in the show’s first season. The Lord of the Rings, already considered the most expensive television series in history.

A redistribution of the audiovisual landscape

While forecasts already predicted in 2019 that the number of subscriptions to video on demand services should reach nearly one billion worldwide, these services have experienced a meteoric rise during the pandemic.

A recent study by the Superior Audiovisual Council in France concludes that the market is now structured around a few global digital players, who are stepping up their investments in local production. They are thus pushing the historical players to review their differentiation strategies, thanks to ambitious buyout or merger operations, editorial positioning, aggregation of exclusive content and the development of alternative offers.

The multiplication of the offer also forces the players to deal with new consumer profiles (including a high proportion of young people) who regularly subscribe and unsubscribe from one audiovisual service in order to test others.

In competition with the digital giants, which have gone from being simple distributors and broadcasters to that of content producers, the majors of the Hollywood industry have had to show agility and rethink their business model.

The race for subscribers

MGM studio was one of the last pioneers in American film production not to have relied on an online video platform or created its own video-on-demand service.

For example, Disney acquired 21st Century Fox in March 2019 and got its hands on the Hulu platform, even before launching its own Disney + service. The latter has passed the milestone of 100 million subscribers in one year, with an enriched catalog of content from Fox, Pixar, Marvel or Lucasfilm studios.

Another example: after the takeover in 2018 of the conglomerate Warner Media and after launching its HBO Max platform in May 2020, the telecommunications giant AT&T has just decided to merge its activities with Discovery. It will thus be able to invest more in original content and offer viewers more choices with new video experiences.

Amazon’s aggressive strategy has enough to shake Netflix, whose number of new subscribers is declining due to a lack of content renewal and saturation in certain markets (notably in the United States and Canada).

At the same time, with the purchase of MGM and the acquisition of its rich catalog of films, it is a safe bet that the number of new Amazon Prime Video subscribers will skyrocket in the coming months or years. Amazon could also deprive its main rivals (Netflix, Disney +, HBO Max, Apple TV +) of the exploitation of exclusive content authorized under license from its new catalog.

To maintain its leadership position, Netflix is ​​forced to accelerate its growth in promising markets such as French-speaking Africa and to diversify its services by offering new content. The multinational recently surveyed some of its users regarding a new platform called N-Plus, which could offer the functionalities of a social network (with reviews and comments that can be shared with friends or with the community), combined with a website of news including podcasts, personalized playlists and information on upcoming productions.

Other rumors circulate according to which the Californian group would nourish ambitions for the video game market and would consider launching by 2022 a service to compete with Apple Arcade.

By going beyond its core business to position itself in the video game industry, the platform would take a risk after all measured. This would allow it to offer interactive entertainment with content combining fiction and video games in order to further generate user engagement and the interest of new audiences.

, Professor in international communication, University of Quebec in Montreal (UQAM)

The original version of this article appeared on The Conversation.