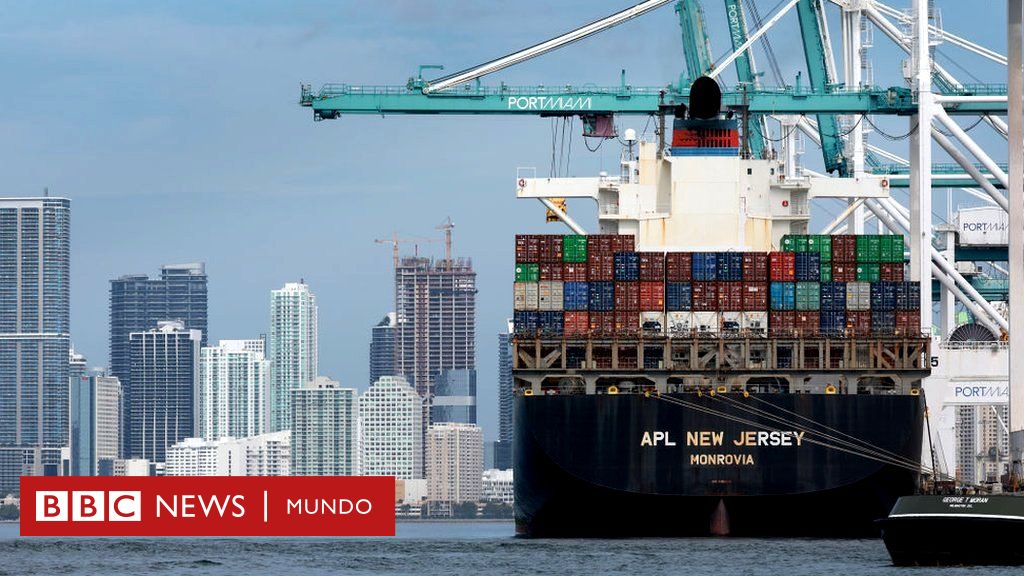 Lake Erie, one of five freshwater bodies that make up the Great Lakes system along the US-Canada border, may not seem like a solution to current problems in the US supply chain.

But, according to BBC journalist Stephen Starr, it could be exactly that: a solution.

Connected to the Atlantic Ocean through a system of canals and locks, the Port of Cleveland is one of several Great Lakes shipping hubs currently experiencing a resurgence.

Last year, the total cargo handled by the port increased 69% compared to 2020.

And April tonnage figures doubled those of the same month of 2021.

“We’re getting a lot more calls from people (shippers and cargo owners) who normally wouldn’t want to use a smaller inland port to move their cargo,” said David Gutheil, the port’s chief commercial officer.

As major river terminals along the US East and West coasts struggle with delays caused by side effects of supply chain problems Caused by multiple factors, from China’s COVID-19 lockdowns to Russia’s war in Ukraine, companies are turning to ports long ignored as a way to keep trade in and out of the United States.

Multinational shipping companies were the first to spot the potential of the Great Lakes.

In August, a Dutch shipping company added a ship to its Antwerp-Cleveland route to meet growing demand.

In November of last year, a ship traveled from Shanghai a Clevelanda forty-day voyage that bypassed the major ports of Southern California, Virginia, and New Jersey, to avoid delays there.

It’s not just international freight companies that are using the Great Lakes ports to move their goods.

The port of Cleveland now operates a Texas-based company that transports cargo from the Gulf of Mexico to Lake Erie, a 1,000-mile journey, to ship its products to Europe.

“They don’t have container or ship capacity over there (in Texas),” Gutheil explained.

The Decline of Inland Ports

Although the ports located in the Atlantic and Pacific oceans dominate the US shipping industry today, it was not always so.

The Great Lakes ports once served as a crucial sea highway in North America for the transportation of agricultural products and minerals such as iron, coal, and limestone during the 19th and 20th centuries.

However, the deregulation of the rail and especially trucking industries in the 1980s, combined with relocations to Asia and elsewhere in the world, brought about the decline of the Great Lakes ports.

Located more than 3,500 kilometers from the Atlantic Ocean and northwest of Cleveland, the Duluth-Superior terminal – the largest of the Great Lakes – had its heyday in the 1950s, when it moved around 70 million tons of commodities such as iron ore and grains.

That made it the largest freshwater port in the world.

For 2017, the amount of cargo that operated was reduced by more than half.

But today, at a time when America’s major coastal ports are struggling to meet demand, the Great Lakes have the potential to expand the capacity of the nation’s shipping industry.

The port of Cleveland, for example, only moves about 10,000 containers a year, but could handle ten times that number.

And Duluth-Superior has expanded its facilities to include a customs office that now allows you to handle international cargo.

Its first overseas shipment, 200 containers of bagged beans bound for Italy, France, Germany and Hungary, sailed at the end of May.

Not everything runs smoothly in the northern ports.

The reports of shortage of icebreakers hampered maritime activity last winter when the lakes froze over.

Also, during the winter months, US and Canadian operators do not maintain the canal’s 15 locks that allow ships to move between the Great Lakes and the Atlantic Ocean.

This means that even if the southern sections of the Great Lakes, such as Lakes Erie and Ontario, did not freeze over in winter, passage between the Great Lakes and the Atlantic would not be possible.

“One of the main obstacles to overcome is the problem of seasons; the Great Lakes they are not open 12 months (of the year),” explained Daniel Rust, associate professor of transportation and logistics management at the University of Wisconsin.

“Supply chain managers want to ship a certain way all the time and have a reliable supply chain 12 months a year,” he added.

Another challenge is that the locks can only accommodate vessels no larger than 23.8 meters wide, which means that many ships cannot pass.

The Ever Given ship that blocked the Suez Canal for a week last year, for example, is 59 meters wide.

But industry experts say these problems could be overcome.

To establish a shuttle service or transport of smaller boats would close this gap, according to some analysts, and this is an option that several Canadian ports have recently taken.

Meanwhile, people on the Great Lakes say they are ready to help.

As Gutheil put it: “If you have 10 or 20 ports … that move as much as we do, then you can start to talk that there will be a significant change in the world of supply chains.”