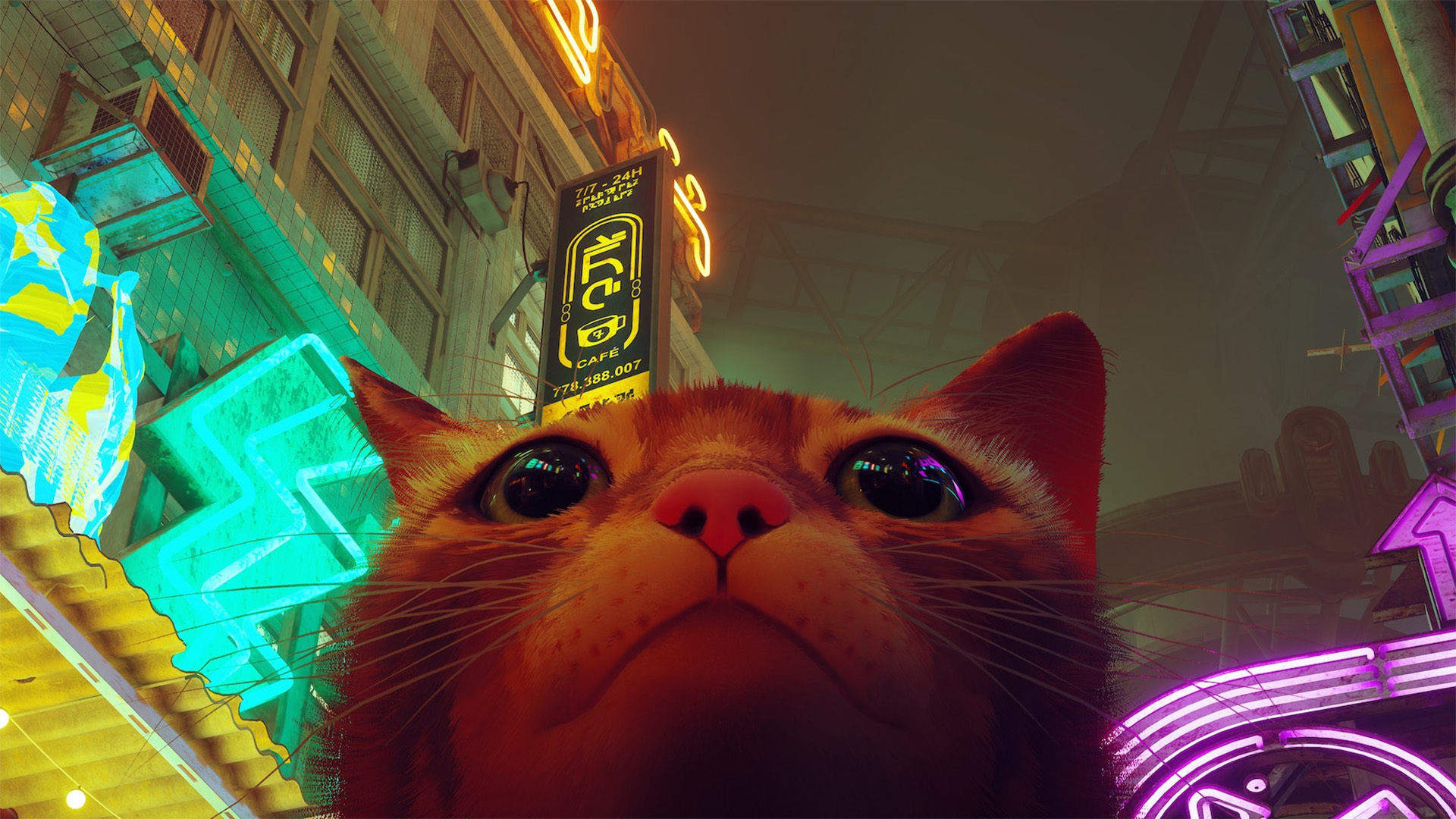 … But, by the way, I have a terrible allergy to cats. Stray seemed like a mysterious game to me from the very announcement, and I deliberately did not watch anything about it, except for the debut trailer. Cyberpunk Cat is all I knew before it came out. In fact, the gameplay turned out to be too artless, and there is no cyberpunk in the game at all. And frankly, Stray is simply boring.

Most of the time, the game is a linear walk through a beautiful robot-infested city of the future. Suddenly – with parkour in the spirit of the latest Assassin’s Creed. That is, there is no free jump here, you just need to hold down the cross on the gamepad and the cat will jump where it needs to (Elden Ring will not let you lie about how much the usual Soviet jump in games changes things). And where it is not necessary – it will not jump. It made me feel bad at the very beginning of the game. I expected to see at least a platformer. But somehow you can get used to it.

The second largest mechanic is a classic adventure game, just very, very simplified. There are two hub levels in Stray that you need to wander through to find the right characters, find the items they ask for, and exchange them for something useful. Well, apply this useful in the right place. At these moments, Stray is a bit like the “Machinarium” in spirit, but without much imagination, and in some places even logic. Also tolerable, but strained for my taste. I will remember the chain of actions for finding a working jacket and helmet closer to the end of the game for a long time – for me this is something at the level of making a cocktail in the first Siberia (although there was logic there), well at least without pixel hunting.

Well, the third mechanic is stealth. For a while, you need to run from the drones, do not get caught in the beams of their spotlights and hide in boxes. Stealth is also very conditional and light, but in some places a little stuffy. For example, when drones need to be replayed as cheap ones, lured into cameras and locked. There are also chases and “shooting”, but these are such episodic stories even within the five-hour Stray that they cannot be called full-fledged mechanics. It is from these bricks that Stray is assembled.

As a result, Stray’s gameplay is not far from walking simulators … but gone

That’s why people say that in Stray you should not dig, but relax. And I love a lot of walking simulators, I really relax in them while images and food for thought pour in my head (be sure to check out our list of zen games). But Stray makes me do something, pulls me out of my comfort zone. Items, out, you need to look for, or logic in adventure puzzles. Fry local headcrabs a little with ultraviolet light, again, hide a little in boxes. That is, the experience is simple, but not quite relaxing.

And at the same time, you can’t call it “meaningful” or exciting either. Well, it’s all too elementary! I feel like Stray is stuck at a crossroads. She is afraid of being a walking simulator, but she is no less afraid of becoming a full-fledged platformer or “quest”. As a result, it turns out neither here nor there, and therefore – just boring and pointless.

The beauty of Stray should distract from boredom, but there are nuances here too

To put it bluntly, I overhyped Stray myself after reading the rave reviews on Twitter before launch. Such a picture there is the most beautiful post-apocalypse! And the most beautiful game of the year, no less! As a result, Stray is really damn beautiful when it draws a futuristic neon city under a dome with artificial stars – you want to admire and drive Print Screen into the floor.

But in addition to neon lights, Stray also has nondescript sewers, and a shabby prison, and a garbage dump, and a sterile control center. There is nothing to catch the eye – Stray is beautiful, but not all. However, many people prefer to forget the boring levels of the game. Or sewers also seem delicious to them – the taste and color.

And in general, technically, Stray is made “simple” and is not without jambs, such as lagging and just crooked animation, objects falling into each other and a cat passing through robots, and sometimes walls. Yes, and the cat itself, forgive me the witnesses of the red-haired assholes, is “drawn” far from standard. The models are simple, the textures too. However, the light at all locations is ingeniously arranged, it is he who draws the whole picture. He and a lot of details on every corner (but not on levels like sewers and prisons, again). For a small studio, the result is amazing, but it is far from AAA-level technical excellence.

The last bastion – a story, touching, poignant, written in an atmospheric setting

At least that’s what I’ve heard about him. In fact, everything turned out to be much more mundane – well, or simply did not resonate with me personally. Problems start already at the setting stage. In my head, its atmosphere rested only on some non-obvious similarities with the already mentioned “Machinarium”, which I love very much. Otherwise, everything is so familiar and superficial that it doesn’t really linger in the head. We have a distant future here, humanity extinct from the “plague” and a city closed from the outside world, inhabited by robots. They used to be servants, but now they have gained self-awareness. Some want to get out, like our cat, who got here by accident.

See also  "It's cold": studio Croteam showed a teaser of a possible add-on for Serious Sam 4 - Games at DTF - DTF

Actually, the story revolves around the attempts of the protagonist and his new robot friends, who call themselves outsiders, to get out. At the same time, the cat, in fact, is not even the main character – at the very beginning he finds a drone named B-12 with advanced intelligence. It is he who will communicate with everyone, direct and move history forward. We play it as transport – we just carry it where we need it in a cute backpack on our back.

All the twists and turns in this adventure are at the level of a children’s cartoon. Yes, it can break someone into a tear, but I can’t call Stray an outstanding or catchy plot even with a big stretch. The characters and the game world are written out too superficially, all events are too predictable. It is literally a fairy tale written in huge letters in a picture book. Outside of it, there are some interesting thoughts about the types of society, about robots that organized an almost religious village at one point in the city, and a dictatorship with repressions at another. Yes, and the plague that killed people is curious, and the origin of the local “headcrabs”, which, it seems, are associated with some kind of bacteria. But they won’t tell us more about this – the game is about a cat.

And the cat in Stray is really cute, but he can’t pull out the game on himself

It can meow and rub against robots. To doze in pillows and tear up sofas. Dropping cups off tables and staring at the wall for no reason. In Stray, you can really play a cat. But literally an hour of time is enough – you will play enough of this gimmick for your eyes. And in general, all these things do not really impress me.

Well, you can behave like a cat, so what? At the same time, I cannot cause a response that cats get when they are naughty or just do something strange. Roughly speaking, I can’t piss on a robot’s leg and brazenly hiss at him when he expresses displeasure. In the simulation of cat life in Stray, there is no entertaining exaggeration, as in the famous game about the goose (we will not even remember the goat simulator at all). Everything is decent and realistic, but without interactivity and the response of the world, this all does not work.

At the same time, the feline nature of the protagonist does not play any role in the mechanics and plot, and sometimes it looks completely strange. Heroes demand too much from him and humanize the red-haired villain too much. And in response, as befits a cat, he looks without much emotion. Well, after him I catch the same mood and don’t feel anything special. What is my guide to the world of the game, such are the emotions from it.

Stray is not a bad game, I am truly happy with its success and ninety-seven percent positive reviews on Steam. I am happy for the developers, and for everyone who got high on Stray, cried and meowed. But my life is drawn to dig in and figure it out. I will never put up with takes in the spirit of: “The game has a soul.” Or even worse: “There’s a cute cat, what else do you need, you heartless bastard ?!” – this is generally an attempt to divert a substantive discussion into ironic territory. What is this soul? What did the cat in the main characters give to the plot and gameplay of the game? If you delve into these issues, it turns out that Stray is still not for everyone, not the game of the year, and not anyhow a revelation.