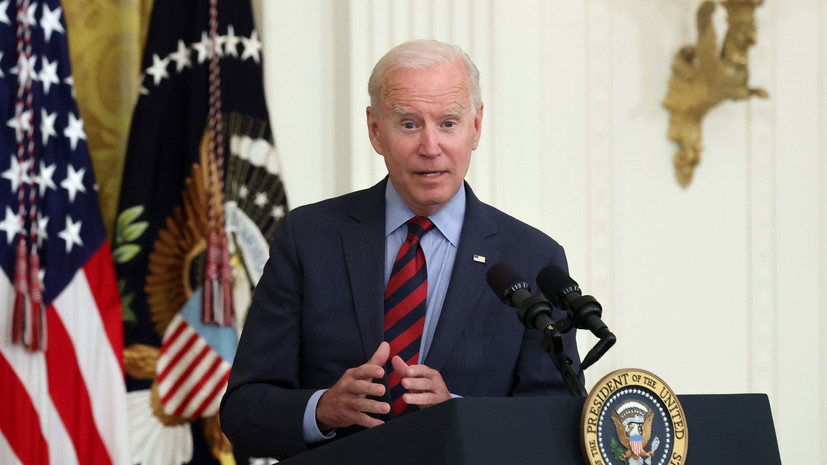 why Joe Biden’s rating is declining – RT in Russian

The approval rate of US President Joe Biden among Americans fell to 46%. This is evidenced by the results of a public opinion poll conducted by the University of Quinnipeck. It is noted that this figure in May was 49%. Fewer Americans support Biden’s economic policies and measures to contain the spread of the coronavirus. According to experts, the decrease in the rating of the current head of the White House is the result of his ineffective policy to combat COVID-19, as well as dubious measures taken in the migration and energy sectors.

The approval rating of US President Joe Biden among Americans dropped to 46%. This is evidenced by the results of a public opinion poll conducted by the University of Quinnipeck (Connecticut).

“President Biden’s approval rating is currently mixed: 46% of Americans approve of his work, and 43% do not. For comparison, in May 49% of respondents gave a positive answer, and a negative – 41%, ”the press release says.

At the same time, only 43% of respondents support the economic policy of a democrat.

The end of the “honeymoon”: why the rating of Americans’ approval of Biden’s policy has dropped

Fewer Americans are satisfied with the US policy. According to a survey by the research company Ipsos, only 45% of the population …

The number of those who do not like the measures of the head of the White House to combat the COVID-19 pandemic has also increased in the face of the spread of the delta strain and a new sharp surge in the incidence in the United States. If in May there were 30%, now it is already 40%.

“He was at the head of the fight against coronavirus, so why is the American president losing the support of his fellow citizens? The delta strain is killing unvaccinated people, and the White House may have prematurely adopted an overly optimistic stance about “getting out of the crisis,” said Tim Malloy, a sociologist and analyst at the University of Quinnipeck.

The fall in Biden’s rating was also recorded by the Gallup Institute of Public Opinion in July. The results of the poll, conducted from 6 to 21 July, showed that this figure dropped to 50% from 56% in the previous month.

“Prior to that, for the entire period of his (46th President of the United States. – RT) the rating did not show significant changes. Thus, the current indicator is currently the lowest for him, ”summed up in Gallup.

The drop in popularity of the American president was linked by the analysts of the institute, among other things, to an increase in the number of cases of coronavirus, a slowdown in the rate of vaccination, as well as to the fact that prices for gasoline and a number of goods for the population are growing. Biden’s highest approval rating was 57% in late January / early February and April, according to Gallup.

Analytical firm Ipsos, which conducted a survey for ABC News from 23 to 24 July, came to similar conclusions about the level of approval of Biden’s policies. According to her, more and more Americans are disappointed in the approach of the head of the White House to solving the internal and external problems of the United States. The number of those who are satisfied with the current course of Washington has decreased by almost 20% – from 64% in January to 45%. It was clarified that the president’s work on crime, immigration and the situation on the US-Mexican border, as well as violence related to firearms, is generally approved by only a little more than a third of Americans.

According to the aggregator of the results of opinion polls – the portal RealClearPolitics, now 50.7% of Americans approve of Biden’s activities. 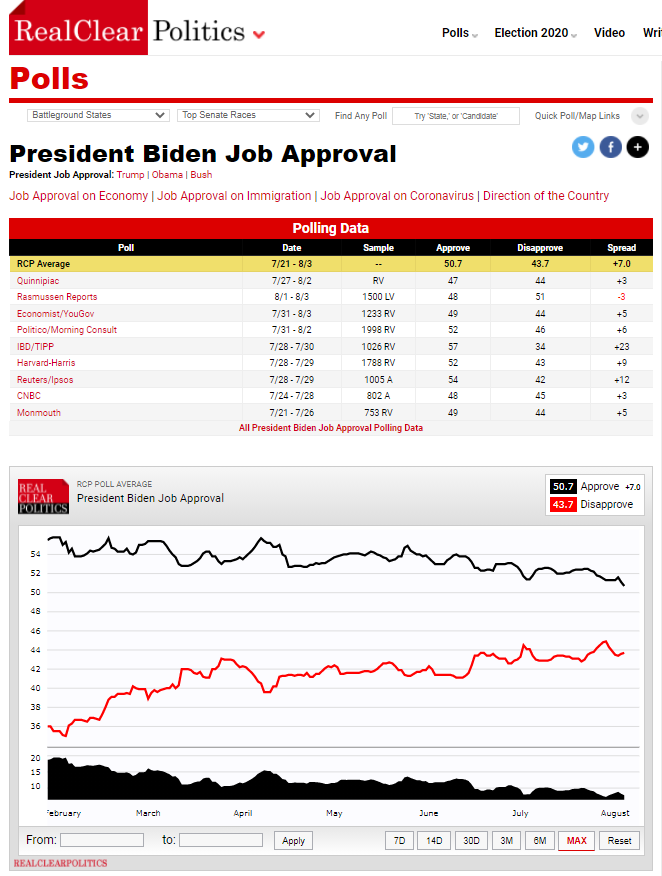 As the graph shows, this is Biden’s lowest rating since January, when he came to power. According to the platform, this figure began to decline steadily since May, when 54.9% of Americans supported Biden’s policy. At the same time, the highest level of approval was recorded at the end of January – 55.8%.

“The situation is still difficult”

According to experts, the negative dynamics of the current president’s rating is the result of his ineffective policy in the fight against coronavirus, as well as in the migration and energy spheres.

“The Democrats, led by Biden, criticized Trump for failing in the fight against COVID-19, and now, being at the helm, they themselves began to experience difficulties. Nobody canceled the coronavirus, and then you can’t get off with words about great America, you need to back them up with real deeds, “said Konstantin Blokhin, a leading researcher at the Center for Security Studies of the Russian Academy of Sciences, in an interview with RT.

Recall that the United States is still breaking world records for the spread of the new coronavirus. So, according to Johns Hopkins University, to date, more than 35.3 million cases of infection have been detected in the United States, 615 thousand people with a confirmed diagnosis of COVID-19 have died. 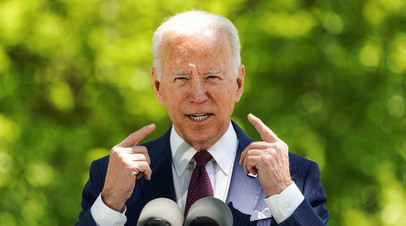 100 days with a Democrat: how were the first months of Joe Biden’s presidency

The director of the Franklin Roosevelt Foundation for the Study of the United States at Moscow State University, Yuri Rogulyov, also speaks of a direct connection between the decrease in the rating of the incumbent president and the pandemic.

“The initial euphoria in connection with the elections has already passed, and the problems with the coronavirus and in other areas have only increased. The Biden administration was unable to maintain high rates of vaccination. The head of the White House promised to defeat COVID-19, but he has not yet succeeded in doing so. It is still not possible for him to overcome economic difficulties. The situation with this is still not easy, “he explained in an interview with RT.

In addition, according to Rogulev, the rating of the incumbent head of the White House is declining, including due to the migration crisis, which has exacerbated due to his policy of open borders.

“Of course, the aggravation of migration problems is also creating tension in American society, causing concern. Biden with his decisions shy away from side to side, but this does not bring a positive effect, “- says the analyst.

We will remind, earlier the Republicans have repeatedly criticized the US President for his policy in the field of illegal migration. As Republican Senator Lindsay Graham noted on Twitter in July, the current White House administration’s commitment to open borders could lead to “an even greater collapse of the rule of law.” In turn, the head of the Republican National Committee Ronna McDaniel drew attention to the fact that in the United States on the southern border “there is the strongest influx of illegal migrants in decades.” Earlier, referring to the data of the US Border and Customs Service, she said that in June about 189 thousand illegal migrants entered there. At the same time, as reported by Republican Senator Ted Cruz, in 2021 the number of illegal immigrants in the United States exceeded 500 thousand. He predicted that this figure would only increase.

See also  "Take a serious look at it": US does not classify Russia as a "terrorist sponsor".

Political analysts also believe that Biden’s rating could have decreased due to his ineffective steps in the energy sector.

“A significant part of American society is disappointed with the decisions of the head of the White House in this area. America is not ready to go full steam ahead with green energy. It is very expensive to change drastically, and it hits the pocket of the Americans, ”says Rogulyov. 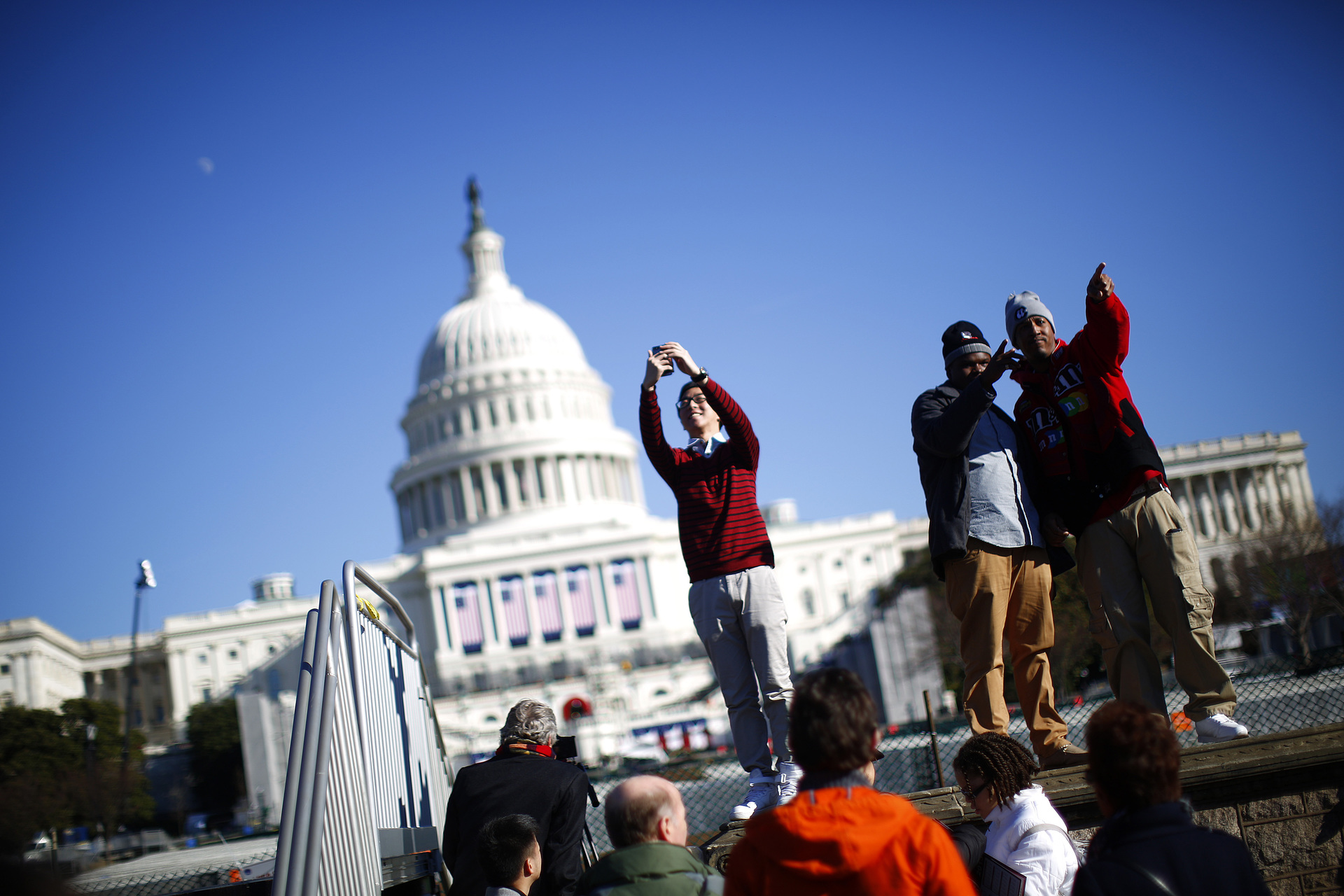 It is worth noting that after Biden came to power, fuel prices in the United States rose sharply. In particular, according to the American Automobile Association, the cost of gasoline in this country has increased by 40% since the beginning of the year, reaching a seven-year high. Against this background, Republicans and a number of American media often criticize the energy strategy of the Biden administration. In particular, in the editorial column of The Wall Street Journal on July 6, it was said that the clear goal of the incumbent’s policy is to reduce oil and gas production in the United States, “limiting the global supply of fossil fuels in the name of combating climate change.”

According to Konstantin Blokhin, six months after the inauguration, a significant part of the Americans realized that Biden’s team was not as effective in practice as it was stated in the election promises.

“Under Biden in the United States, the situation in most areas has not become more stable. Therefore, if during the presidential campaign his statements and promises were somehow perceived by the American society, now it is pretty tired of them, which is reflected in the approval rating of the head of the White House, ”the analyst said.

At the same time, Yuri Rogulev doubts that Biden’s popularity will grow in the future.

“The situation for the US President is probably not going to change for the better when you consider that a new wave of the coronavirus pandemic is coming. Some states are still literally drowning in restrictive measures. Added to this are other internal US problems. In such conditions, Biden’s rating will continue to decline, ”the expert predicts.