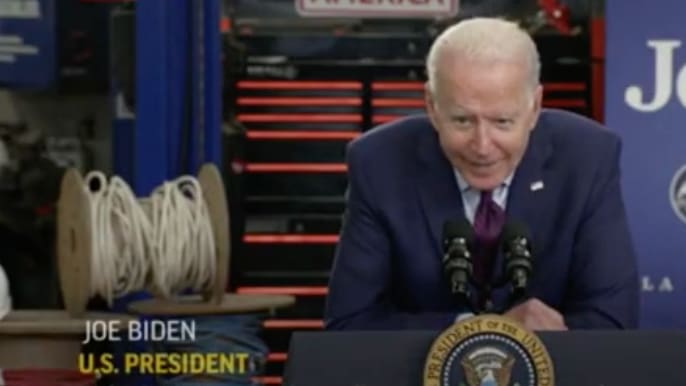 Anyone who makes politics has to get in touch with the people personally. After all, what is more convincing than addressing your project live and directly to citizens in a gripping speech?

US President Joe Biden (78) also uses rhetorical means in his public appearances. During the lecture he plays with rhythm changes, pauses and different volumes. He pushes the latter remedy to the top, which seems strange to many listeners. Because the US President sometimes changes from speaking to whispering.

Sudden change from speaking to whispering

This was also the case in his speech, which Biden gave at the end of June at the transport company in La Crosse, Wisconsin. The content of the speech was the repairs of roads and bridges, until he changed the subject – namely, with the President leaning forward and saying in a low voice: «I think we should give normal people a tax break. The rich are fine. “

At another White House press conference in June, when it came to the $ 973 million package for the infrastructure, Biden’s appearance also made people smile. When asked when the families could expect additional financial aid, he replied in a whisper: “I have already helped them with relief of 1.9 billion dollars. You will find weighty checks in your mailboxes. “

The President’s whispered messages are clear to understand. But why Biden changes to a whisper is unclear to many. One possible reason for choosing this rhetorical device is Vanessa Beasley, a lecturer in communication studies at Vanderbilt University in Tennessee.

This language method is said to come from earlier times, when the relationship between politicians and journalists in the capital was still different. “I think that’s a symbolic gesture of closeness and familiarity,” Beasley told Detroit News.

Biden, who has been a senator and vice president for 40 years, has seen this type of communication himself and has taken it with him.

Criticizing whispers because there is nothing else to criticize

The linguistic gesture, which is supposed to create familiarity, offers critics and comedians a target for attack: Kayleigh McEnany (33), who was press spokeswoman in the White House until January, is said to have described Biden’s whispers as “strange” and “crazy”.

The comedian Stephen Colbert (57) mimicked the president and whispered into the microphone in his performance: “Mr. President, Mr. President. You know I’m a fan of yours. But the way you lean over and whisper, you know, it’s a little creepy. “

The White House does not think much of this discussion and is defending the president, continues the Detroit News: “The conservatives criticize him because otherwise they cannot provide the voters with any other points of criticism.”

The Vice Press Spokesman of the White House, Andrew Bates, emphasizes the positive changes that have taken place during Biden’s tenure: “The number of corona infections has fallen by more than 90 percent, we have created more jobs than ever and the economy growing faster than it has been in 40 years. ” (une)