An original candidate dreams of becoming governor of California. Angelyne is “internationally famous” according to her.

Long before the world heard of Paris Hilton or Kim Kardashian, Angelyne had already set out to become famous by simply pretending to be. The self-proclaimed “queen of the billboards” of Los Angeles is now officially in the running to replace the governor of California in the event that the unlikely referendum for her dismissal on Tuesday wins a majority of “yes”.

His program calls for the establishment of an annual “bubble bath day”, a masked ball, a political rehab, and perhaps does not take itself very seriously. “I am already the queen of the universe. Governor of California would fall“, sighs the starlet.

Angelyne and her candy pink Corvette are an integral part of Los Angeles and its gallery of larger-than-life characters. For decades, she has been seen posing in alluring underwear and suggestive poses on billboards with the sole mention of “Angelyne”. Her erotic-kitsch aesthetic – long platinum hair, outrageous makeup and overflowing cleavage – is sure to get her noticed. But which product exactly does she praise?

“Everyone was saying ‘Oh, you are so beautiful’. Someone is going to suggest something to you. No one did. So I decided to do it myself“, she told AFP.”As a teenager, I did beauty contests. Then I was in a rock band. And then I started making billboards.” “And then I just became internationally famous“, minaude Angelyne.

Professional celebrity websites credit her for a few screen appearances as an actress, but more often as “herself”, such as sports or music stars. 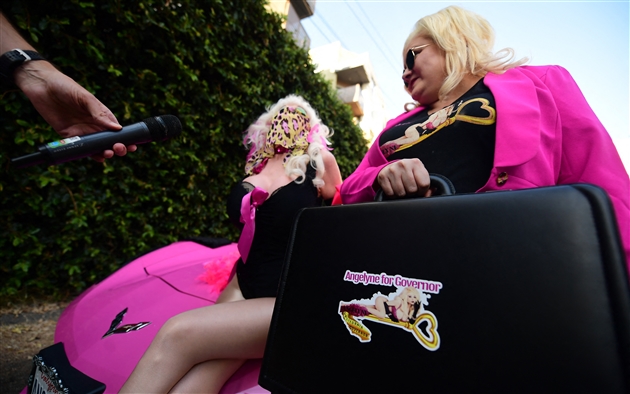 Angelyne does not budge: her professional celebrity status is deserved, unlike her younger competitors. Paris Hilton “do nothing. The Kardashians don’t do anything“, she assures.”I am doing something. I paint, I sing, I dance … It is not a question of demeaning them but it is me who started“, lance Angelyne.

“I wanted to become a chemist”

His official biography remains very vague, and even more on the dates. She claims to be Californian. Or that in California? “Just california“, she replies.”I have a doctorate in chemistry. I wanted to become a chemist but ended up finding myself in showbusiness“, she says most seriously, virtuously dodging questions about her thesis, her university, etc.

According to a portrait published in 2017 by The Hollywood Reporter, Angelyne would be none other than Ronia Goldberg, born in Poland in 1950 to Jewish parents who had survived the Nazi death camps. After a childhood in an ultra-Orthodox community in Israel, the teenager is said to have grown up in a banal suburb of Los Angeles. His latest attempt to stand out came in the form of this candidacy among about fifty others aimed at dethroning Governor Gavin Newsom. If the “yes” to the dismissal wins more than 50% of the votes, the one who obtains the most votes will be carried at the head of a State equivalent to the fifth world economic power.

“I am already winning”

This democratic UFO – in force in various forms in some 20 US states – has already attracted the interest of many unorthodox candidates, such as Caitlyn Jenner of the Kardashian clan, a self-proclaimed “shaman” and a cannabis consultant.

According to the polls, none of them stand a chance of winning. Arnold Schwarzenegger, in 2003, brought down the then Democratic governor in favor of a similar referendum. Angelyne was already in the race and had gathered just over 2,500 votes. She doesn’t seem to be betting on a win this time around either.

“I do not know. I am already winning. And I don’t want an office job“, retorts the starlet, who will soon turn 71 if the portrait of the Hollywood Reporter is correct.”I do what I want, it’s my whole life“, Angelyne smiles, squirming in front of the AFP lenses on the hood of her pink Corvette.