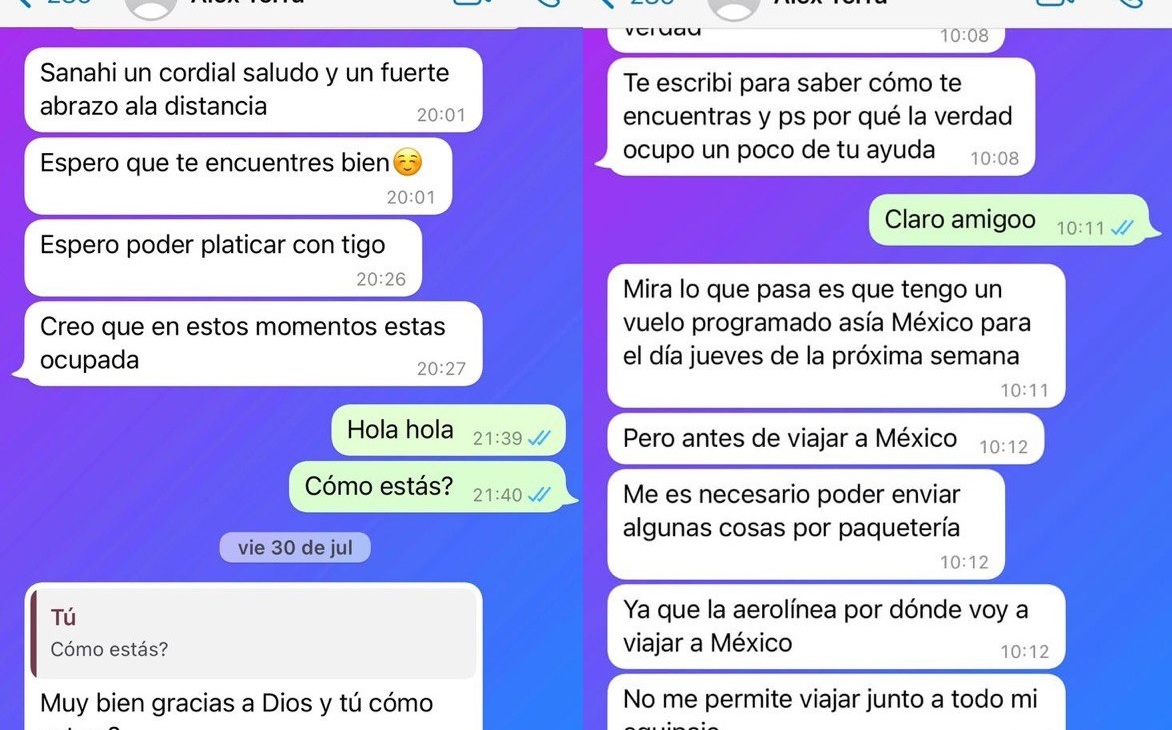 WhatsApp: Friend in need, they warn of the new type of fraud

One of the forms of fraud through WhatsApp is that of the “friend in need”, It is the one where cybercriminals hack WhatsApp accounts and write to family and friends of the person whose account was hijacked, posing as the victim.

Sinaí suffered this type of fraud, it all started when his friend Alex, who lives in the United States, wrote to him on WhatsApp, told him that he would send electrical appliances to Mexico and asked him for help to receive the package at home, he even sent him an image of the shipping invoice.

Two days later Sinaí received a WhatsApp message supposedly from FEDEX, where they told him that the package exceeded the allowed monetary value and for this he had been credited with a fine from the SAT of more than 120 thousand pesos. Alex assured Sinai that he had transferred the fine money to him.

“My friend told me that he was going to deposit the money, he asked me for an account, he sent me the screeshot of the deposit that he had made to my account, but since it was Saturday he told me that it still did not fall because it was a non-business day and it was on dollars and what the transaction was done was probably Monday. He insisted that he will help him because he could not allow that package to be lost ”, explained the affected woman.

The money was not reflected in the Sinai account and her friend began to insist that she pay the fine so that the package would not be returned to customs since it contained more than electrical appliances.

“He ended up confessing to me that dollars came in that package. It was approximately two million pesos that was hidden and the FEDEX boy kept bothering me, he told me that I had to pay the fine because otherwise that package was going to be returned to customs and then they were going to open it, “he explained.

The blackmail was exacerbated when the “friend” told him that, if he did not help him pay the fine, the package would be opened, the dollars would be discovered and both would go to prison.

“He tells me that he could not allow that to happen because we were going to go to jail, that he was very sorry, but that it was a very sensitive issue. Money laundering went through my head, they used me as a mule, ”he said.

Fearing being an accessory to a crime, Sinai paid half of the alleged fine. When the woman passed the screenshot of the transfer to the friend and the FEDEX boy, they both admitted it was a fraud and even made fun of her.

See also  Price of the dollar today Saturday, how is the exchange rate?

Sinai tried to contact his true friend by other means to warn him that they were posing as him to commit a crime. When he was finally able to speak with the young man, he found out that he had a week without using his phone line, WhatsApp and Facebook.

Sinai, recalls with anger and frustration having been a victim of fraud through WhatsApp and admits that she became suspicious and cautious when talking to other people through this application.

“I have conversations with my friends and I reiterate that it really is them, suddenly not everything is on WhatsApp, I do make a call, if they are asking for help or lend me money, I will make a call or sometimes I tell them, send me an audio to listen your voice and see that it is not someone else who is trying to rob me, “he said.

Fraud through social networks is a reality, de according to the State Prosecutor’s Office, Facebook and WhatsApp are the networks by which the population is most defraudedn. One of the most common forms of fraud is requesting money by message, before making a deposit.

Faced with this problem, the Prosecutor’s Office issued a series of recommendations to avoid this type of scam:

See also  WhatsApp: what is the "disconnection mode" for and how to activate it | Chronicle