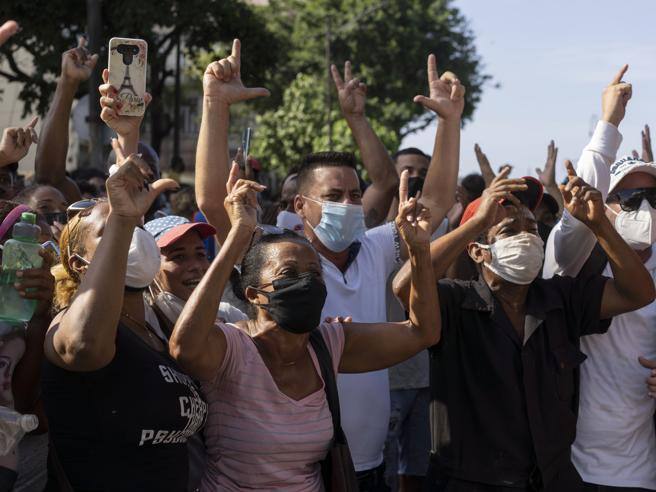 What is the situation on the island, what has triggered the protest, the errors of the government, the demands of the dissident artists

(This article appeared on Mondo Capovolto, the newsletter dedicated to the South of the World, edited by Sara Gandolfi, published by Corriere della Sera. To register, for free, just click here)

What happened on Sunday in Cuba?
Thousands of people took to the streets across the country, from Havana to Santiago, through a tam tam relaunched by social networks. The massive protest recalled the famous 1994 maleconazo it pushed Fidel Castro to meet the demonstrators and dialogue with them. These were the years of the especial period, after the collapse of the USSR and the end of generous Soviet aid: Cuba suddenly found itself starving.

Today as then, the spring that pushes the Cubans to protest the harsh economic crisis. On the island, as in the early nineties, there is no food in the dishes, electric blackouts last for hours and people pushed to emigrate to the United States, by any means. Even risking his life at sea on the balsas, rudimentary rafts.

But today there is something more and different than in 1994. The leaders have entrenched themselves in the palaces of power. IS hundreds of people ended up under arrest.

What was the trigger for the protests?
A number of factors have created this very complex situation, Carlos Alzugaray, a Cuban analyst and former diplomat, told the PA, including economic sanctions of the United States against the island, in force for more than 60 years.

Cuba lost $ 5.5 billion in 2020 – almost double what it would earn in a year from tourism – due to the embargo and further sanctions decided by former President Trump (and not lifted by Biden).

The Covid-19 pandemic, which has tourism blocked, a major source of income for the island, has made matters worse.

But there is also one clear responsibility of the Cuban government that it has not been able to carry out the reforms so that Cuba has a stronger and healthier economy, adds Alzugaray. And many Cubans, an unprecedented fact, began shouting explicit slogans in the street: Libert, down with the dictatorship, patria y vida.

What are the mistakes of the government?
In 2020, the economy shrank by 11%, the worst figure in three decades, and at the beginning of the year the Cuban government proposed a new package of economic measures that raised wages and pensions, but also prices. .

The authorities have embarked on a process of monetary unification which has caused high inflation and with it the shortcomings and the absence of a stable retail market.

Given the lack of foreign currency, shops in freely convertible currency – you can only pay by credit card – have been created where groceries and household appliances are sold, while there are fewer and fewer products in Cuban peso stores.

Since last month, cash dollars, the primary currency in which citizens receive remittances from abroad (especially from Miami exiles), have not been accepted temporarily.

What happened to the Castro?
Fidel Castro there is no more. The charismatic leader of the nation, capable of uniting the people and, when necessary, also of finding impossible compromises, the Sierra warrior who knew he was a political end, died in 2016. He had already left the scepter of command to his brother, the generalissimo. Ral, which since 2010 had gradually introduced the economic reforms necessary to circumvent the economic embargo and the end of Soviet aid: cautious liberalization of small private enterprises – i self-employed – and doors wide open to foreign investment and tourism.

In 2018 he handed over the presidency of the Council of State to the designated heir Miguel Diaz-Canel.

On 11 April he also left him the position of first secretary of the Communist Party of Cuba. Sunday for reappeared in the chambers of power, at the extraordinary meeting of the Politburo of the CCP. A sign that power worried.

The new leadership that did not make the Revolucin
Miguel Angel Diaz-Canel was not even born when the Castro family overthrew the dictatorship of Fulgencio Batista in 1959. a 61-year-old electronics engineer who was greeted with high hopes by some and with great skepticism by others outside Cuba when he took office: the new man for a state in the process of transformation or just a gray bureaucrat of the regime?

His latest public speeches, after the protests on Sunday, and the constant references to Chavismo and his brother president Nicolas Maduro they suggest that he has chosen the hardest way of repression, Venezuelan style.

The birth of a new (artistic) dissent
In November 2020, a group of artists gathered in front of the Ministry of Culture to ask for more space for independent creation.

Arrests, harassment, exile followed. But the Movimiento de San Isidro, the 27N group, other informal groupings of dissent or critical thinking such as the intellectuals gathered around La Joven Cuba have become stronger and stronger. And they have also begun to demand freedom of thought, of expression, of democratic choice. Also supported by older and more famous artists, inside and outside Cuba.

Many dissidents have been arrested in recent days.

Use of the internet and #SOS Cuba
The Cuban government has designated social networks and the US government – or Cuban-American interest groups – as direct sponsors of the demonstrations.

Social networks like Facebook and Twitter were indeed key to the protests, with a hashtag #SOS Cuba went viral. Internet use is booming since opening the service in 2018. Cuba closed 2020 with 6.6 million mobile phone users, including 4.4 million with Internet access, whose only provider is a company. of State.

Not surprisingly, one of the first moves on Sunday was to shut down the Internet throughout the island while the police and army lined up on the Malecn, in Plaza de la Revolucin, at the Capitol and in all other sensitive points of Cuba. Soundtrack of the protest that became the song Patria y vida.