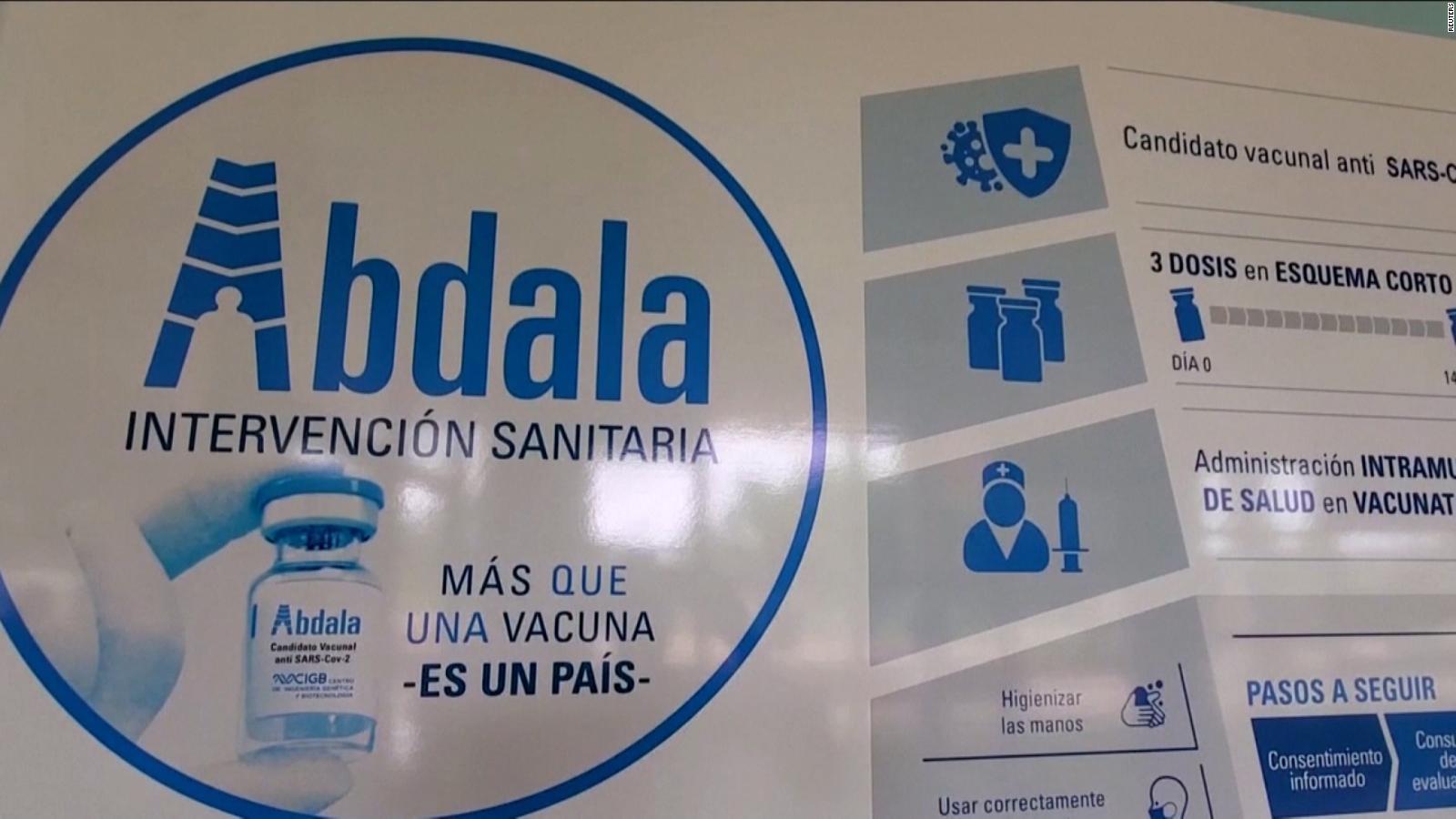 What we know about the Cuban-made vaccine Abdala

(CNN Español) — Mexico joined a small handful of countries that have authorized the use of the Cuban vaccine Abdala against the coronavirus.

The vaccine, which has not yet received authorization for emergency use from the World Health Organization (WHO) or other multilateral regulatory bodies, is more than 90% effective, according to Cuban scientists in articles so far without review by peers and financed by the Center for Genetic Engineering and Biotechnology (CIGB), which developed it, and by BioCubaFarma, the state biopharmaceutical group that produces it.

These are some facts you should know about this vaccine.

At the start of the pandemic, Cuba, which has long made many of its own drugs, announced that the island would not import vaccines as, according to the government, it could not afford to compete with other countries for the drugs.

Instead, the government focused on developing its own vaccines, noting that they could eventually be manufactured in other countries or marketed to visiting tourists as part of “vaccination holidays.”

Cuba was the first country in Latin America to produce three homegrown vaccines that achieved approval for emergency use from its own government: Abdala, Soberana 02 and Soberana Plus.

The Cuban vaccine Abdala may be used in Mexico 1:23

Despite the worsening economy and the increase in United States sanctions against Cuba, the island has managed to develop five candidates for the vaccine against covid-19, three of which have obtained authorization for emergency use by the Regulatory Authority. of Medicines, Equipment and Medical Devices of Cuba, Cecmed, a local regulatory authority recognized by the WHO. As of December 23, the WHO reported that it was still awaiting information on BioCubaFarma’s strategy and schedule for submitting the authorization request. In this situation were both Abdala and Soberana 1, Soberana 2 and Soberana Plus (conceived as a reinforcement of the previous two).

See also  CNN reporter in Kabul: "Taliban openly show that their basic ideology has not changed"

So far, the Cuban government reports that it has supplied more than 30 million doses and has 85% of its population vaccinated, according to data collected by CNN based on information from Our World in Data.

So far no studies have been published on the efficacy of the Abdala vaccine against the omicron variant, but according to the president of Cuba, Miguel Díaz-Canel, “booster doses will be given in the face of the threat” of the variant.

What is the efficacy of the vaccine?

The state newspaper Granma reported in November that Cuban scientists attributed to the Abdala vaccine an effectiveness of protection against severe disease due to covid-19 of 92% and a 90.7% effectiveness against death from this disease. The figures were given after an effectiveness study carried out in Havana between July 11 and August 31, 2021.

According to this information, during clinical trials Abdala demonstrated 90% effectiveness in clinical studies, Granma reported, noting that during phase III trials it demonstrated “an efficacy of 92.28% in the prevention of symptomatic disease. .. in the provinces of Granma, Santiago de Cuba and Guantánamo, with more than 40,000 volunteers “.

In which countries is the Abdala vaccine used?

The Federal Commission for the Protection against Sanitary Risks of Mexico (Cofrepis) announced on December 29 the authorization of the emergency use of Abdala.

Through a statement, Cofrepis detailed that specialized personnel carried out the technical-scientific review of the vaccine and determined that it meets the requirements of quality, safety and efficacy.

In addition to Cuba and Mexico, the Abdala vaccine has been licensed in Vietnam, Iran, Venezuela, and Nicaragua.

See also  Commission: Thousands of pedophiles in the Catholic Church in France since 1950

What is the status of the vaccine before the WHO?

“We decided to transfer production to a new plant, the one located in Mariel. We are starting production there and adapting the documentation, which must be sent to the WHO,” he added.

According to Martínez Díaz, while the process advances, “there is no impediment to using vaccines” in other countries, as this procedure depends on the regulatory authority of each country.

As the Government of Cuba has not yet received authorization for emergency use from WHO for its vaccine, it cannot be purchased through the Revolving Fund of the Pan American Health Organization, said Dr. Jarbas Barbosa, its director in September. attached.

During a PAHO briefing on Wednesday, when asked if those countries that are having problems buying other brands of vaccines can consider Abdala as an option, Barbosa said that “each health authority has its own legal framework in each country. and based on that legal framework, they evaluate the vaccines and give authorization for their emergency use. ” He remarked that “we do not comment on what decisions each of the national regulatory agencies of each country makes. This is a sovereign decision of each authority.”

And he added: “We cannot make exceptions here. We have to have the emergency use authorization so that it can be purchased through the revolving fund. We can facilitate the country to present its information, but only for vaccines that have already received that authorization. “.

See also  six years of erosion of the British economy

So far the WHO has given emergency authorization to 10 vaccines against covid-19. The vaccines that have been approved in more countries are those from Oxford / AstraZeneca (184), Pfizer / BioNTEch (122), Janssen / Johnson & Johnson (95) and Moderna (83 countries), according to WHO data updated as of 29 February. December.

The PAHO Revolving Fund has been working with its member states to guarantee access to vaccines and thus achieve their immunization goals, helping the countries of the Americas protect their populations against some of the worst diseases in the world, such as polio, smallpox and measles. The Revolving Fund has been key to understanding, collecting and forecasting the demand for vaccines.