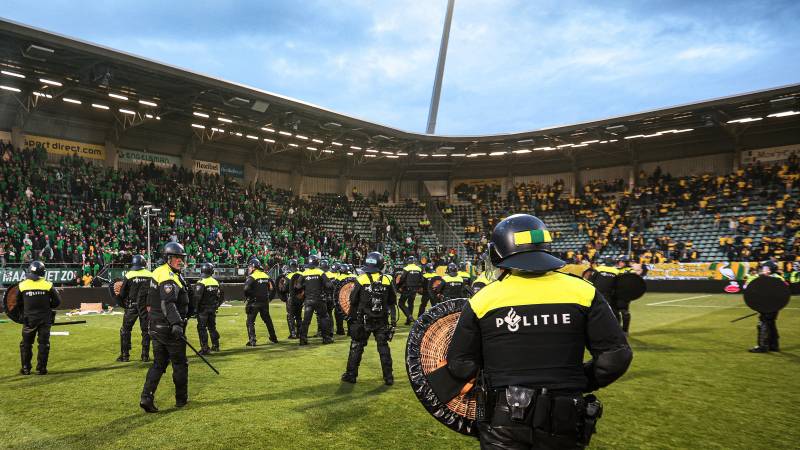 What to do against field storms? ‘Bar where there is fighting will also close’

A draconian measure such as replacing fences along the field does not seem an option for the time being. “Fences do not benefit the experience. You have to be able to go to a match a bit normally. We do not notice that a return of the fences is being requested at the moment,” says the spokesperson for the Audit team.

Ben Veenbrink, stadium expert and project leader for the renovation of the collapsed AZ roof, also does not expect a return of fences soon. “Here you lose the ‘good’ supporters. It is important that the bad are excluded.”

Mayor Paul Depla of Breda says clubs should be punished harder if their supporters misbehave. “We are talking about penalties for clubs if they don’t have their finances in order. That should also apply if there is a lack of safety.”

Permits also need to be looked at, says Depla, who is also a spokesperson for the mayors in a KNVB advisory group on public order and safety. “If there is systematic fighting in a certain pub, that pub will also close. That is sad for the man who just quietly drinks his beer at the bar, but a group-oriented approach does work.”

According to Depla, such measures should be implemented as early as next season. “The prestige of football is at stake. More and more people will say that it is ridiculous that a large part of the police capacity is used for football matches. Clubs and mayors also have to ask themselves: what do you allow in your own stadium ?”

Otherwise, the normal supporter will drop out, Depla says. “Supporters will think three times before they take their children to the stadium when they see those images from yesterday. The real supporter is the loser.”