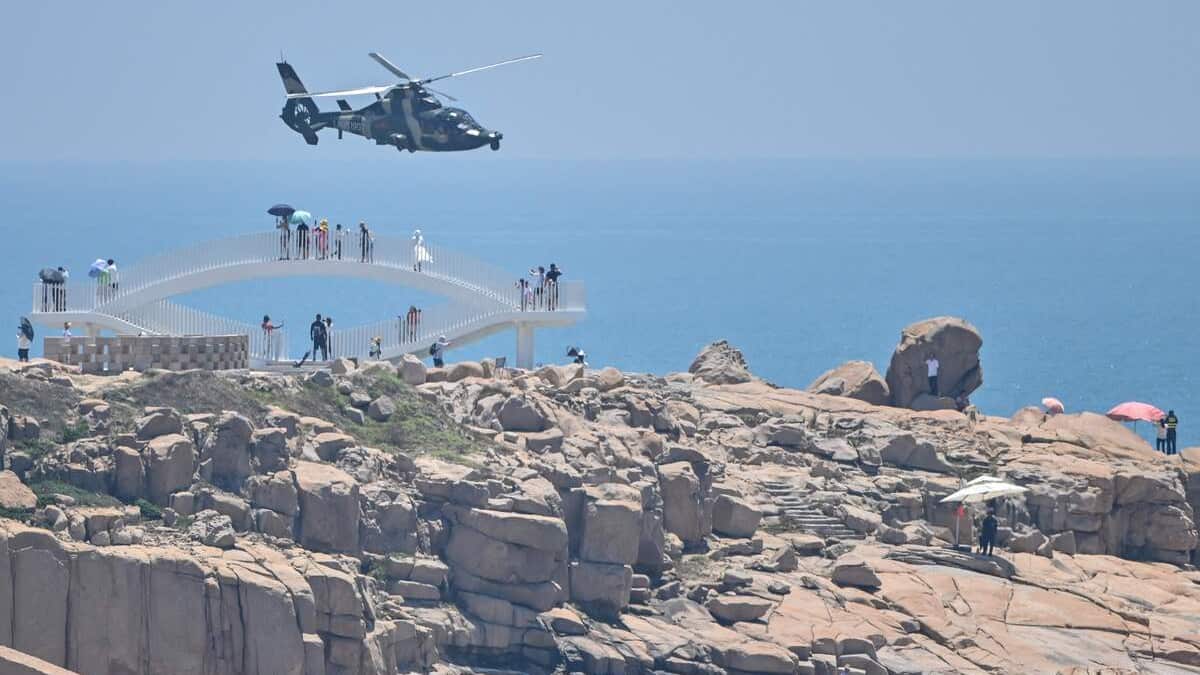 What the crisis in the Taiwan Strait is already teaching us

The major Chinese maneuvers around Taiwan, in which warships circled the island, offered an unprecedented taste of what a real military campaign by Beijing against its neighbor would be like.

• Also read: Taiwan accuses China of faking an attack on the island

Beijing has also imposed economic sanctions and stepped up efforts to isolate Taipei from the rest of the world, moves that will permanently upend the status quo in the Taiwan Strait, experts warn.

Here are the lessons to be learned from China’s largest-ever military exercises around Taiwan, in response to the visit to the island by US House of Representatives Speaker Nancy Pelosi.

For the first time, the Chinese military conducted exercises on the eastern flank of Taiwan, a highly strategic area for the supply of the island, and through which possible US reinforcements would arrive.

The signal is clear: Beijing can now prevent any entry or exit from the island of civilian or military ships and aircraft.

For a long time, analysts predicted such a strategy on the part of China in the event of a war to conquer Taiwan.

“This crisis shows that Beijing is capable of repeating — and intensifying — similar actions at will,” said Christopher Twomey, a security specialist at the California Naval Academy.

“But maintaining (a blockade) would be very expensive, both for China’s reputation and for the finances of its military,” he nuanced.

See also  Bundestag on abortion: heated debate on paragraph 219a

China’s current economic problems make it unlikely that it will take the risk of a major disruption in the Taiwan Strait, one of the busiest waterways in the world, in the near term.

China has rapidly increased and modernized its air, space and sea forces in an effort to project its power globally and close the gap with the US military.

Beijing’s military capabilities are still inferior to Washington’s. But the goal is to have the necessary means to overcome any resistance to an invasion of Taiwan by 2027, according to the Pentagon.

Collin Koh, a naval affairs expert at the S. Rajaratnam School of International Studies in Singapore, said the exercises revealed how far China’s military had come since the last crisis in the Taiwan Strait in 1995-96.

“The least we can say is that the forces they have deployed on the ground, and the fact that they were able to conduct an exercise of this magnitude, proves that they are much more capable than they were in the 1990s ,” says Koh.

Taiwan’s 23 million people have long lived under the threat of a Chinese invasion. But that threat has become much more real under Xi Jinping, China’s most powerful leader in a generation.

China is now boycotting fruit and fish from Taiwan, in an attempt to hurt the island’s economy. Analysts say the move is aimed at eroding electoral support for Taiwan’s pro-independence government.

Beijing sanctioned companies that supported the Taiwanese government’s development aid agency to undermine what it called Taiwan’s “checkbook diplomacy” toward its allies.

See also  From Saturday - With so little snow, the ski area celebrates its season opening

But analysts say China will keep its military and economic actions below the threshold of war, to avoid a direct confrontation with the United States.

Taiwan may have to get used to China holding similar military exercises in the future, Mr Koh warned.

“Exercises near the main island of Taiwan will become the norm,” he predicted.

“The fact that the People’s Liberation Army carried out such maneuvers set a precedent,” this analyst adds. He even says he expects “that the benchmark will be set even higher in the future, in scale and intensity”.

China regularly sends warships or aircraft across the center line of the Taiwan Strait, the unofficial border between the two neighbors, during times of tension.

But Ms. Pelosi’s visit gave Beijing ‘the excuse or justification to say that in the future it will be able to legally conduct exercises east of the center line without having to account for it’, predicts M.Koh.

China has suspended cooperation with the United States in key areas, including climate change and defense. Washington considered this initiative “irresponsible”.

Beijing has also imposed sanctions against Ms. Pelosi, the third person in the US state, announced.

“This is a time in the relationship between the United States and China where we have sunk really low,” Ms. Glaser said during a discussion organized by the Center for Strategic and International Studies.

“I hope that our two governments will find a way forward to talk about their (…) red lines, their concerns and to prevent the downward spiral in the region from continuing,” she added.