what is the best and worst investment of 2022

For the Argentine who has the power to save, the pesos “burn” in the pocket due to the fact that the latest high inflation data generates a noticeable reduction in purchasing power. And there begins to be evaluated what are the most profitable investments right now.

Therefore, investors seek to assess what were the profits obtained with the Dollar purchasethe placement of a fixed term or the acquisition of shares, last April, in the accumulated of all of 2022 and from the beginning of 2021 to date.

About, iProfessional took the example of a initial investment of $100,000, to analyze which were the most winning alternatives.

To take into account, the Dollar purchase in the official market it has a maximum limit of sale of US$200 per month, which today is equivalent to almost $40,000 per month at the “solidarity” value ($198), in banks and exchange houses, with all taxes included.

This is a value that is currently closer to the price of dollars on the free market, which after the agreement with the IMF has dropped in price, as happened with the Exchange (or MEP) and cash with liquidation, which are around $210. In turn, the blue it is priced at $201, about the same as it was a month ago.

In addition, they took into account fixed terms in pesosboth in the version traditional at 30 days like the UVA, which are at 90 days and adjusted for inflation.

And finally took the renta variablerepresented by the Merval index of shares of leading companies listed on the Buenos Aires Stock Exchange, which in April closed with a drop of 3%.

In the first four months of the year, all alternatives “lost” to inflation accumulated in the same period.

“At the end of April, none of the placements chosen by a small investor during 2022 it was able to overcome the rise of a basket of goods and services measured through the National CPI”, he summarizes to iProfesional Andres Mendezdirector of AMF Economy.

Thus, the saver who put $100 thousand on the first business day of 2022, only due to the effects of inflation did it lose such purchasing power, that for match that starting capital today are required $122.000. Number that none of the conservative investment options could reach.

Under this scenario, the investor who made a fixed term UVA during the last four months, he obtained in that period a capital equivalent of $118,180. That is, it reached a plus of about $18,180 in that period.

“The nominal yield required for ‘beat the price rise’ it was not even reached by UVA placements which, following the retail inflation with a 45 day delay, do not fully capture the acceleration of domestic prices that occurred in these four months. In other words, they ‘run from behind’, just like the strategy followed by the Central Bank, which month after month has been raising the minimum rate for traditional term deposits,” Mendez mentions.

Between the most profitable investmentssecondly, one can cite the traditional fixed termwhich reached an amount of $113.500. An income that in 4 months is 13.5%.

Finally, the saver who acquired official dollar was able to obtain with his initial $100,000 a additional over $11 thousand in all of 2022. 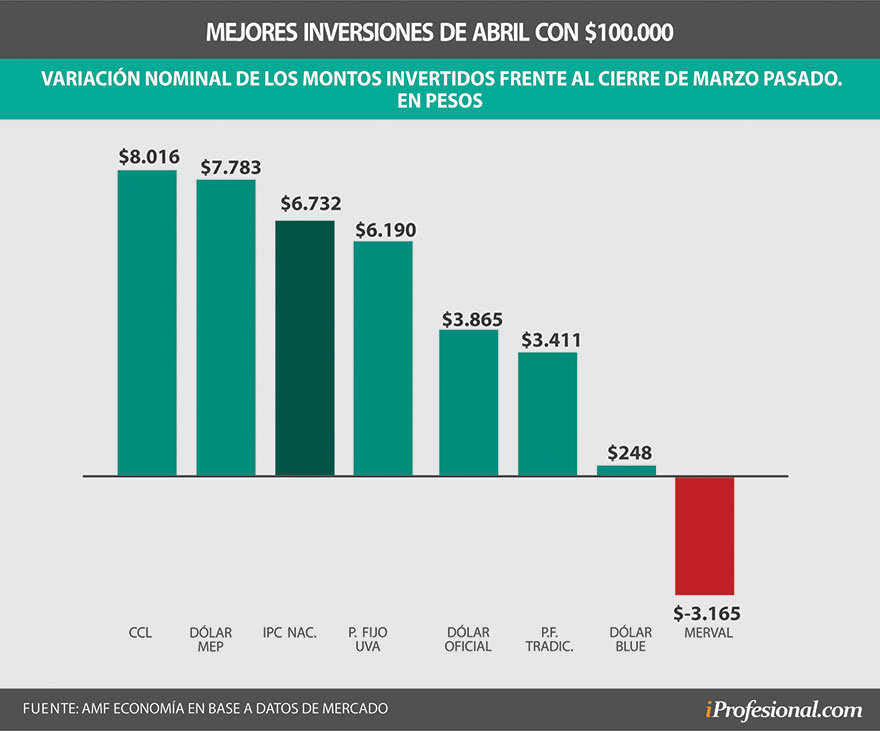 On the side of short-term investments, options most yielding in April were linked to financial dollarswhich rose above the level of inflation and were the biggest gainers.

In this way, the saver who placed $100,000 at the beginning of the year obtained only in all of last month an income that reached $8,000 in the purchase of dollars in the Stock Market, with the purchase and sale of bonds and shares. This was in the case of cash with liquidation, and with the “domestic” option of the MEP it reached $7,783.

Meanwhile, on the side of the fixed term UVAwas obtained in April equivalent to $6,190.

By far, the worst investment last month were the leading stockssince the one who invested $100 thousand in them lost an average of $3,165.

“In this context, the results obtained in the valorization of the investments registered in the month of april: Not all placements lost against the rise in prices, and the formal financial dollars (MEP and cash with liquidation) were able to protect the capital invested during the month. This means that, despite a forgettable first quarter, in April these assets began to show clear signs of recovery,” says Méndez.

And sentence: “The conclusion for this first part of the year is that consume and/or advance consumption is proving to be the exclusive way of preserving purchasing power of the funds. However, the conduct of the past month reveals that the formal savings in dollars began to pay off dividends not previously contributed in 2022″. 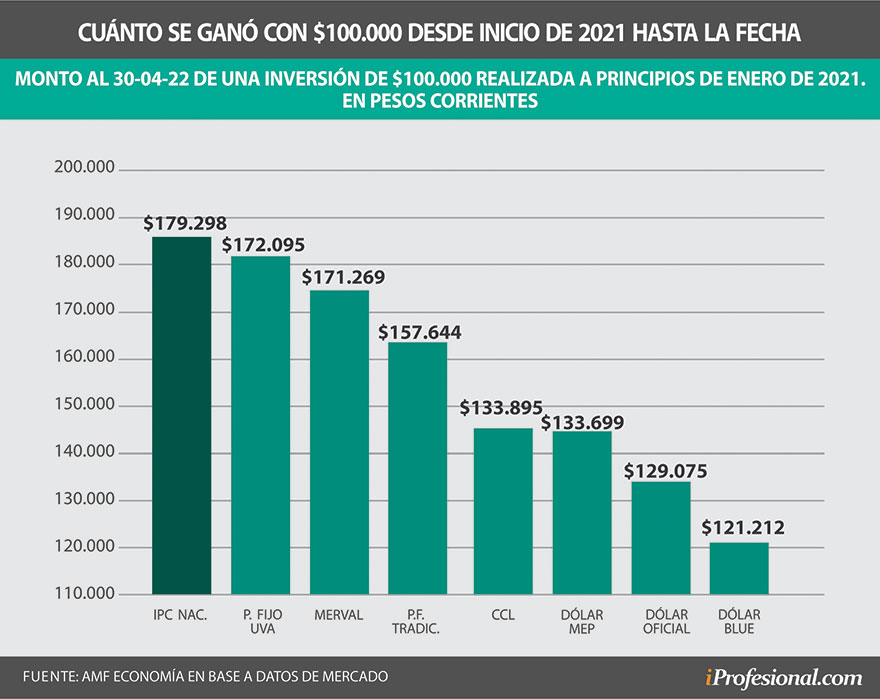 From the beginning of 2021 to date, in these 16 months the UVA fixed term was the most profitable investment for savers.

Winning investments from 2021 to now

If the position of a saver is considered who invested $100,000 at the beginning of last year, the results are directly associated with what was warned in this first part of 2022: no investment could bend the rise in prices in the accumulated last 16 months.

In short, the most profitable instruments for the investor who in January of last year placed the amount of money in the example, were the fixed term UVA and the Merval, because they obtained until the end of last April a sum of $172.100 y $171.300respectively.

As for the prospects for next monthsFor Méndez, in the first place, “a greater tonicity of the various definitions of the US dollar can be expected, as demonstrated in the month of April.”

In particular, he argues that this recovery of the price of the American ticket “would become more evident in the second half of the year”, when the seasonal flows of agriculture tend to moderate, after the seasonal liquidation of a large part of the gross harvest has passed.

“He too fixed term UVA looks crouched waiting for one slowdown in the pace of price increases and, probably, in May and June it could begin to recover the capital lost in these first months of the year”, concludes Méndez.

Finally, for this analyst, the Merval “does not have the margin” to expand as it happened in 2021.

“Although it can recover from the poor performance of last quarter, the conditions are not given for business assets to be valued in a significant way. Only those linked to activities that are repositioned based on the shocks of the international context will do so, and from the progressive overcoming of the mutations that covid-19 introduced”, Méndez concludes to iProfesional.