Alina Zagitova came into conflict with journalist Rustam Imamov after the KHL match, at which the athlete was present as a cheerleader. According to Imamov, the skater rudely demanded to remove all photographs with her that were taken during the meeting. Later, the reporter deleted all posts about what happened and apologized to the Olympic champion, noting that he did not fully understand the situation. In turn, Zagitova posted on Instagram a post about the hate, in which she urged not to violate personal boundaries. Vasily Utkin advised her not to come to hockey if she is worried about her privacy. And Natalya Bestemyanova, on the contrary, supported the girl.

A loud scandal involving Alina Zagitova to some extent eclipsed even the world records of Kamila Valieva and the biggest components in Elizaveta Tuktamysheva’s career at the Finlandia Trophy tournament. On Sunday, they started talking about the incident with renewed vigor, and the hashtag #Handsoff_fromAlinaZagitova (“Hands off Alina Zagitova”) came out on top on Twitter in Russia.

The athlete’s conflict with Sport-Express journalist Rustam Imamov occurred in Kazan during the KHL regular championship match between Ak Bars and Metallurg Magnitogorsk, which the skater unexpectedly decided to visit. The man later spoke about its details in his Telegram channel.

According to him, the Olympic champion was unhappy with the fact that media representatives tried to photograph her, although she was sitting “in three rows from the press rostrum” and could not help but get into the frame.

“It was not her task to shoot, in general, the behavior of the tribune was filmed from a point of view convenient for the journalist. In principle, no one took it off point-blank and in the face, ”the correspondent assured.

“Is in good hands”: why the duet of Medvedeva and Milokhin is the most talked about on the set of “Ice Age”

Filming for the TV show “Ice Age” began not in the best way for Evgenia Medvedeva and Dani Milokhin. At the first rental …

Nevertheless, after the final siren, the athlete went to the press center and, according to the journalist, “in a rather rude manner” demanded that all photos with her participation be removed, at the same time threatening contacts.

“Any request can be expressed calmly and normally. Alina, on the other hand, was clearly not behaving as befits an Olympic champion. Judge for yourself, the phrase “I will sue you, I have such connections!” was appropriate in this story? ” – added Imams.

Later, Rustam said that in the end he went to meet the star guest “out of respect for the Zagitov family,” although with respect for her, “now there are questions.”

“With great power comes great responsibility. She has tremendous strength now. She is a role model for thousands of people. And I don’t want this example to be menacing conversations with media representatives, ”Imamov added.

But in the future, the journalist unexpectedly deleted all posts on this topic in his channel. Moreover, he himself apologized to the skater, her family and fans, calling the incident “an annoying misunderstanding.”

“Due to a general misunderstanding, a small local story turned into a big scandal. Now it is settled, we talked … In the arena, there were cases when she was grabbed by the hands and kept watch at the toilet, which, of course, is unacceptable. After this, the mood and desire to communicate normally will not arise. In turn, I should first decide everything personally and clarify the nuances of what happened, “- quotes the correspondent of” Championship “.

The athlete published a large post on Instagram the next day, in which she clearly hinted at a conflict with Imamov. According to her, popularity has a downside – hate.

“I am noted and hated in the comments on the network, the media write strange articles, take apart what I said, put on, where I went, there is no privacy … Information is sometimes so twisted that I even think it’s probably such a superpower people should have it, ”wrote the Olympic champion.

In her opinion, each person has personal boundaries, which should not be violated by anyone.

“But there is no responsibility in the network, sometimes there are not even faces and signatures. Information is retold and spread at a terrible speed, ”added Zagitova. 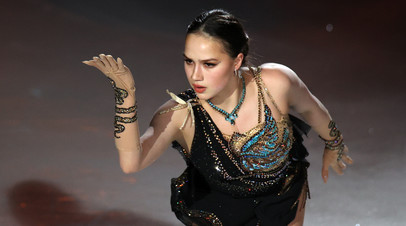 “Medvedeva has better diction”: why the director of “Sambo-70” again criticized Zagitova

Director of the sports school “Sambo-70” Renat Laishev made an ambiguous statement about the skater Alina Zagitova. He explained …

In general, the scandal caused such a resonance that it was commented on by the Russian Figure Skating Federation. The general director of the organization, Alexander Kogan, called hate “a common occurrence faced by many athletes” and advised Alina “not to take it critically.”

But the famous journalist Vasily Utkin spoke out the harshest of all. He said that the girl should have gone not to hockey, but “to play the Mafia, if she was so worried about her own privacy.

“Zagitova is so beautiful that she doesn’t have to be smart. However, she is also very young. This is alarming. We have seen many cases where success at an early age gave the feeling that everything is already good, nothing else is needed. Honey, there is no privacy when you come to hockey. This is a public event by definition. You sit on the podium – you can get into the frame, ”Utkin wrote on the Telegram channel.

But the Olympic champion Natalya Bestemyanova in an interview with RT, on the contrary, supported the skater and suggested that she was simply not in the best mood and was tired.

“It’s just that Alina lost her nerves, could not stand the increased attention to herself. Let’s forgive her. Zagitova has the right to break. Of course, you shouldn’t behave like that with journalists – it will be more expensive. But I perfectly understand how sometimes all this gets. Believe me, you can’t get used to it. Perhaps she worked a lot before and was tired. There is no need to stigmatize a person. You need to be more supportive of the skater who has achieved a lot, ”Bestemyanova said.

At the same time, according to her, according to the conflict with the correspondent, one should not draw conclusions about the presence of a star disease in the girl.

“Yes, Alina is very young. But she is not the first athlete to be successful at such a young age. For example, Tara Lipinski won the Olympics at 15. And she is still very popular, hosts various television programs. People do not receive any blow to the psyche from victories at the age of 15-16. In my opinion, at this age it has already been formed. Star fever? What is this diagnosis? There is no such disease. She’s just a star and deduces her line of behavior as she sees fit, ”added Bestemyanova.

The Olympic champion in speed skating, as well as State Duma deputy Svetlana Zhurova, agreed with her. In her opinion, Alina has recently been “harassed”, and therefore she feels threatened by journalists.

“The question is, in what situation did you catch the person. There are times when you shouldn’t take pictures. Maybe she was not in the mood, did not want to, maybe she was not made up? A person has the right to relax. Of course, she could have answered rudely. I know a number of famous people, the same athletes, to whom for some reason such an attitude: since you are a public person, you must always turn yourself inside out. But not everyone has such a joyful mood. By and large, this is her own business – to allow someone to photograph herself, being at a hockey game, or not. Say: “Guys, I don’t want to.” She has the right to this, like any person, “- quotes Zhurova” Gazeta.ru “.