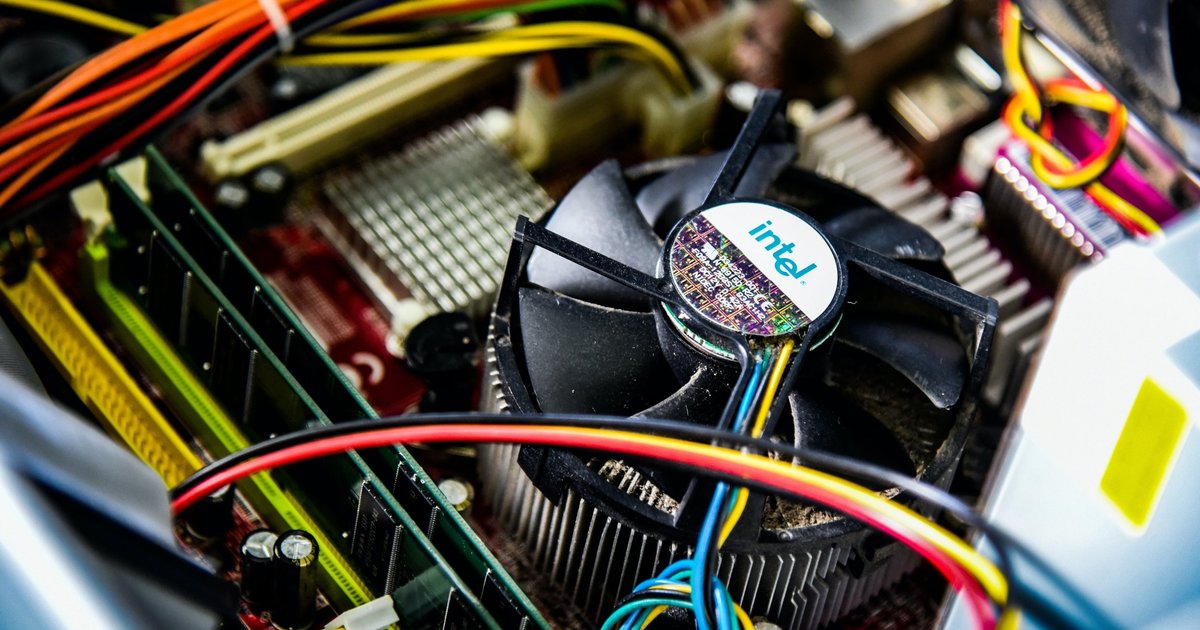 What is a computer capable of for 5000 rubles? We checked

On free classifieds sites like Yula, you can find many offers for the sale of system units worth from 2 to 5 thousand rubles. As a rule, these are systems with Intel Core 2 Duo processors (socket 775). The money is small, but is there any point in buying such a computer?

We decided to test this on our own experience, but did not buy a system unit. Instead, they collected something similar from what was at hand (and for all the time of the hobby for computers, the author of the article has collected enough old hardware).

Buying something other than Intel Pentium Dual-Core, Core 2 Duo and Core 2 Quad based on socket 775 is not worth it. Often, for a couple of thousand rubles, you can run into completely unusable rarities, which are perhaps of historical interest. These are, for example, systems based on Pentium 4 and Athlon 64. 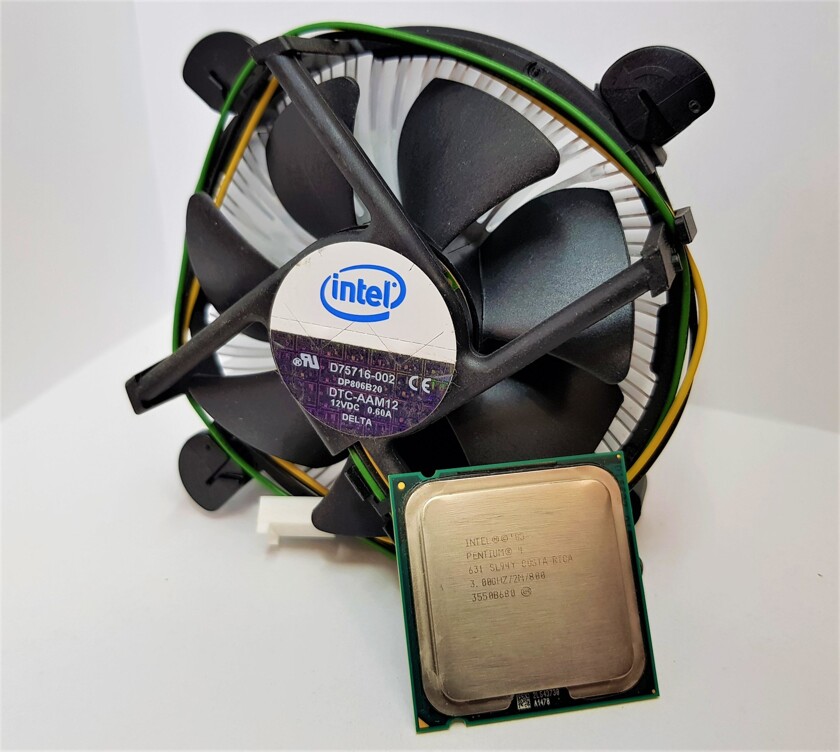 Also keep in mind that the dual-core Pentium Dual-Core and Core 2 Duo are a slightly more advanced solution than a typewriter. For a gaming computer (no matter how strange it may sound in the context of the article), you need a quad-core processor – Core 2 Quad. But a ready-made assembly with it still needs to be found, and the price for it is unlikely to pass along the lower boundary of the market.

It may be much easier to buy the processor separately. The main thing is that the motherboard is suitable. Therefore, you need to pay attention to its model and chipset first of all. If the board model is unknown, ask the seller to take a picture of the board so that the name can be seen. Based on it, you can determine the chipset, and then check compatibility with the Core 2 Quad (the table is on Wikipedia). 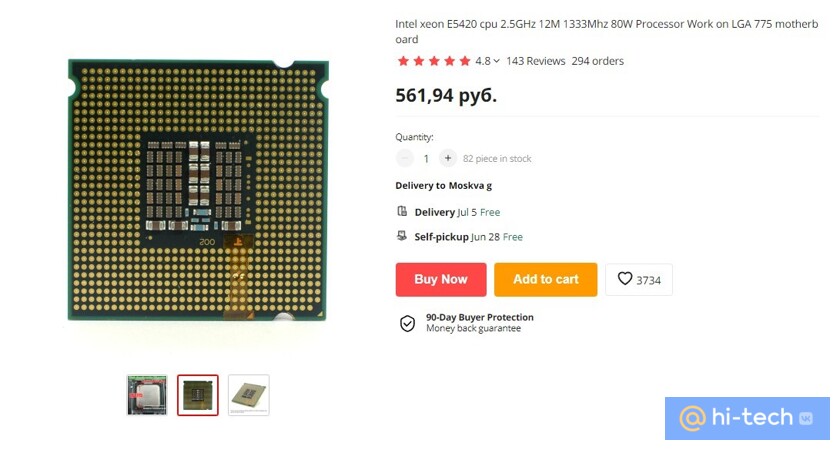 Alternatively, you can not look for Core 2 Quad, but order Xeon from Aliexpress for about 600 rubles. This is a server variant, however the seller modifies it to fit into socket 775. You will also most likely need a modified BIOS for your board (list here). Therefore, before buying, it is better to make sure they are compatible or ask the seller.

Please note that for a quad-core processor, the cooler can be left boxed, but it must be with a copper core. 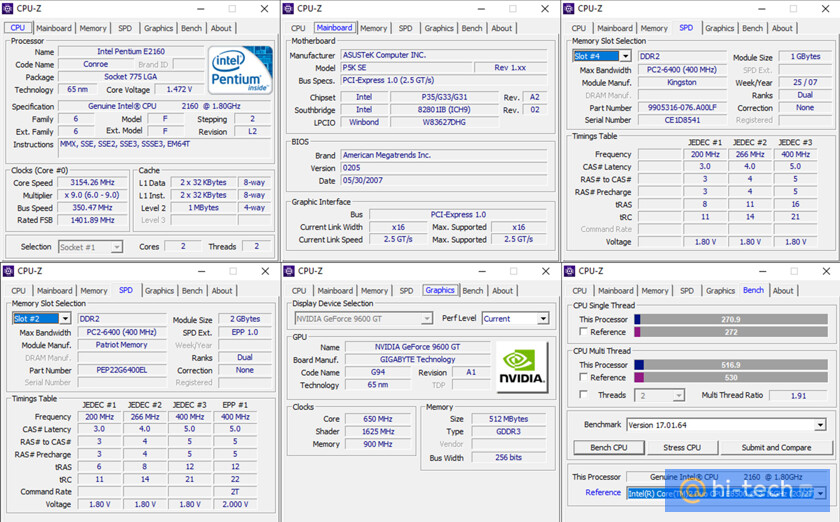 Thanks to overclocking, the Pentium Dual Core E2160 is close to the more powerful Core 2 Duo E8500

Processor from our assembly. The Intel Pentium Dual Core E2160 is a budget processor with a reduced cache and a low base frequency (only 1.8 GHz). In order to “revive” it a little, I had to resort to the good old overclocking on the bus (but without some experience it is better not to overclock). As a result, the frequency reached 3154 MHz, which is already comparable with more powerful processors of that time.

It is better to look for options immediately with 4 GB of memory. This is a more or less comfortable volume for surfing the net. If the assembly has 2 or less gigabytes of RAM, you will have to add other modules, and this is not as simple as it might seem at first glance.

On socket 775, there is a risk that a system with different modules will be unstable or inoperable. The ideal option is to find a factory set of memory from two modules of 2 gigabytes each. 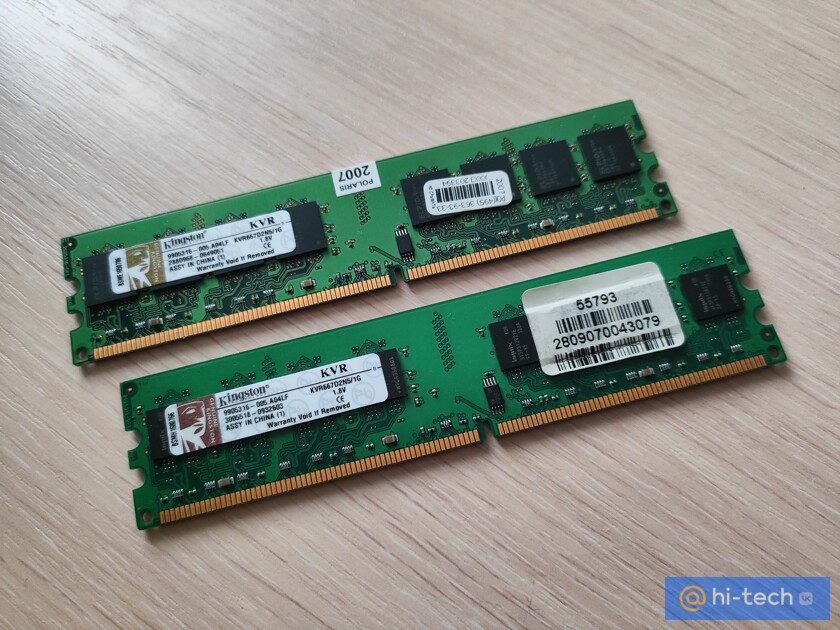 In our case, there were problems with memory. One of the Kingston modules (workable, as it was tested on another PC) did not want to work. Swapping into different slots didn’t help – the system didn’t even start. As a result, the system started up with a Kingston HyperX module for 1 gigabyte and a Patriot module for 2 gigabytes. Dual channel mode was active.

If you can find a platform on DDR3, it will be even better. This will give some performance benefit.

The video card is the most problematic place. Often, in assemblies of this price category, the video card is very old or does not exist at all (computers from offices come across in ads). It is worth noting that there were no processors with integrated graphics at that time, so the “embedding” was on the motherboard. For games, this option is not suitable.

On the other hand, it is also very difficult to buy something decent on the secondary market for minimal money. Therefore, everything here will depend on luck and the number of proposals. For about 1-2 thousand rubles, you can count on, for example, NVIDIA GeForce 9600 GT, 8800 GT, 9800 GT, GTS 250, GTS 450, GT 630. The amount of memory for such solutions will be from 512 megabytes to 1 gigabyte. Be sure to check the video card before buying (read how to do this in our article).

In our case, it turned out to be the GeForce 9600 GT with 512 MB of video memory, which belongs to the 2008 line. Despite this, the official NVIDIA website has drivers version 342.01 for Windows 10 dated 2016. Therefore, there were no problems with the definition and operation in the system.

Please note that if the video card needs additional power, then an adapter may be required (for example, for 6 pins). On older blocks, there are not always cables for powering the video card.

The rest of the components will not be decisive when choosing a system unit, but if you assemble it in parts, then pay attention to the following. The power supply is needed with a power of 300 to 450 watts. It is better to give preference to FSP, Chieftec or Power Man. In our case, this is a 300W FSP (model ATX-300PNR).

Hard drives, and even quite old ones, are a rather unreliable thing. But with the current budget, you don’t have to choose. Before buying, be sure to check the disk for bad sectors. We talked about this in the article “How to check the hard drive for performance.” In our case, it turned out to be a terabyte WD with a SATA interface. Despite the impressive volume, the model is no longer new (WD10EALS) and will be comparable to what you can buy on the secondary market. For 500 rubles, you can count on a live copy of 160-500 gigabytes. Just do not take outdated models with an IDE interface, even if the board has such a connector.

Other components (case, drive, sound cards, etc.) do not matter. If you manage to find all the hardware in a normal case, you should consider this as a bonus. In our case, the system was assembled in the Cooler Master CM 690 II case, but it is unrealistic to find it on the secondary for a penny. But you can buy any other rubles for 300-400. It is important that the iron physically fit there. Basically it concerns the motherboard. ATX won’t fit in a Micro-ATX-only case (read more about that here).

It is also worth noting that older power supplies have short wires. If they are placed in the lower part of the case (as in modern PCs), then the length of the wires may not be enough. 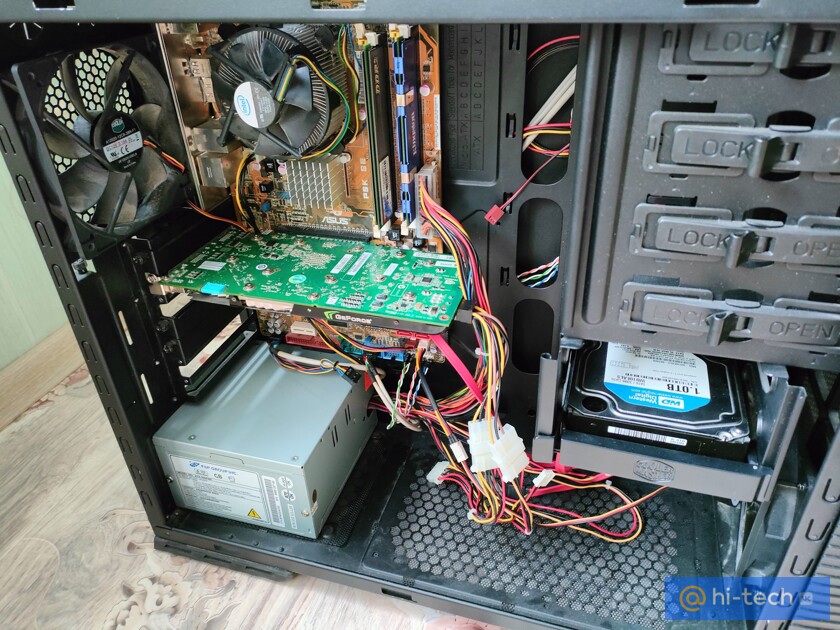 It remains only to restore beauty: remove dust and do cable management so that nothing prevents air from circulating inside the case

Despite the rather weak (even by the standards of such assemblies) hardware, it was possible to install Windows 10 and upgrade it to version 21H2 without problems. And it turned out to be done from a USB flash drive (read our article on how to make a bootable USB flash drive). We did not install WIndows 7 (everything is clear with it anyway), since the purpose of the article was to check whether it is possible to work on this hardware with the current OS. 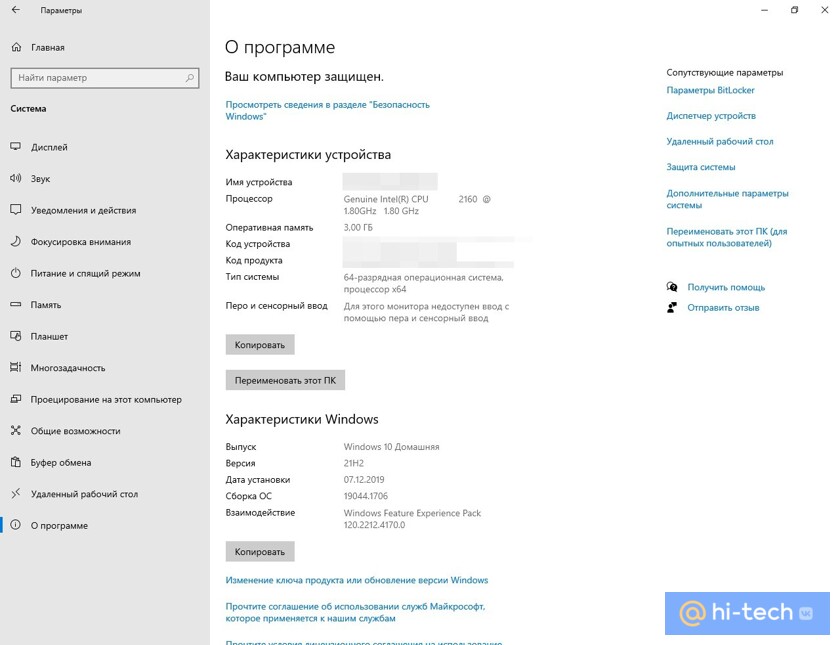 The system itself, of course, is far from being as responsive as on modern PCs. First of all, the lack of an SSD and a dual-core processor affect. Nevertheless, overclocking added some power to the processor, and the system began to work a little faster. We also recommend optimizing the OS, following the advice from our article “12 easy ways to speed up your computer on Windows 10.” 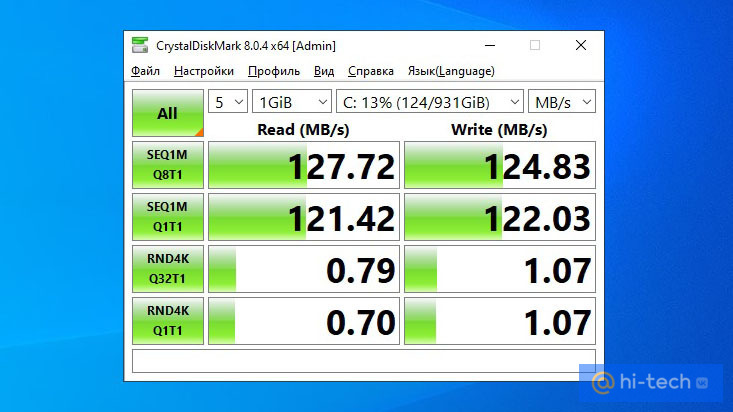 A modern hard drive would have slightly better performance

Internet. Even despite the amount of RAM of 3 gigabytes, surfing the Internet is quite comfortable, unless, of course, you open dozens of heavy tabs. As the main working machine, such a PC will not work, but for simple tasks such as reading the news or communicating on social networks, it is quite. 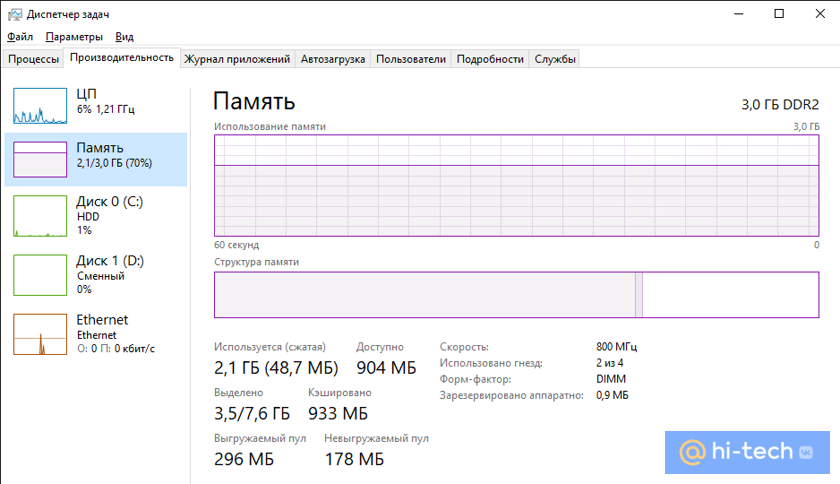 RAM is consumed very quickly, even with an almost empty system

Video. Sites like YouTube and TikTok work without any problems. The system confidently plays videos in 1080p, but slows down at 1440p and 4K. As for playing files from a local drive, the situation repeats itself (if you have a more modern video card, you can use hardware acceleration using PotPlayer).

Games. With our configuration, you can’t count on modern blockbusters. Nevertheless, some undemanding games of recent years still launched. These include the dark adventure INSIDE, the stylish metroidvania Hollow Knight, and Help Will Come Tomorrow, a game about survival in a Siberian forest at the height of the 1917 revolution. You can somehow play games of this kind, however, not all of them will work correctly at a resolution of 1280 × 1024 (typical for square monitors of those years that are sold cheaply on the secondary market). 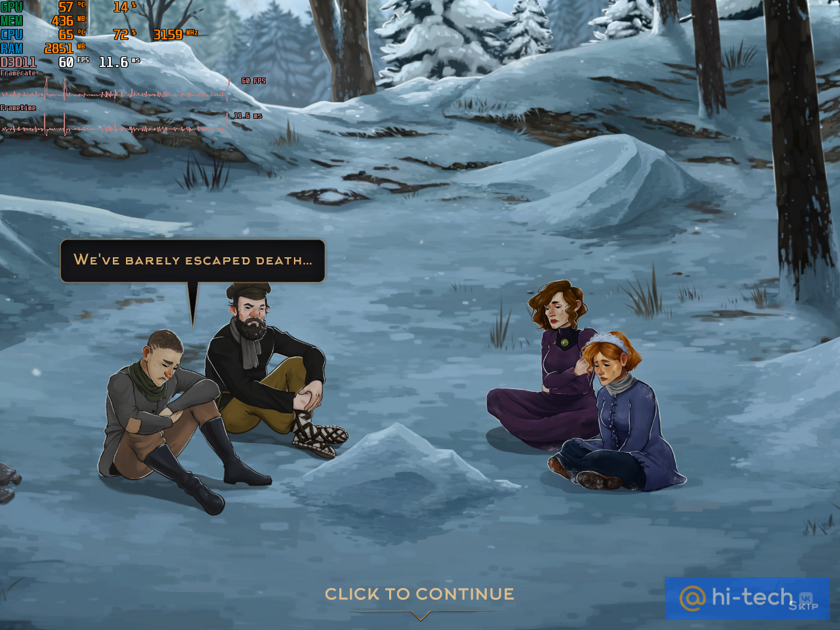 As for the games that were released during the period of the system’s relevance, then, of course, there will be no problems. You can play Fallout 3, Dead Space, Far Cry 2, Tomb Raider Underworld, Batman: Arkham Asylum, Dragon Age: Origins, Assassin’s Creed II, Resident Evil 5 and many other hits.

In our article “How to revive an old computer for minimal money”, we did not advise investing in hardware based on DDR2 RAM. However, some room still remains. For example, an SSD can later be used in another PC or even made into an external drive.

A video card can serve as a “plug” in a new computer. You can buy a processor without integrated graphics and save a little while collecting money for a normal video card. And what else you can save on when assembling a PC, read our article.

But replacing the processor or RAM is a road to nowhere. This, of course, will slightly increase performance, but it is better to immediately look for an offer in which you do not have to change a lot. The less money you have to invest in such an assembly, the better.