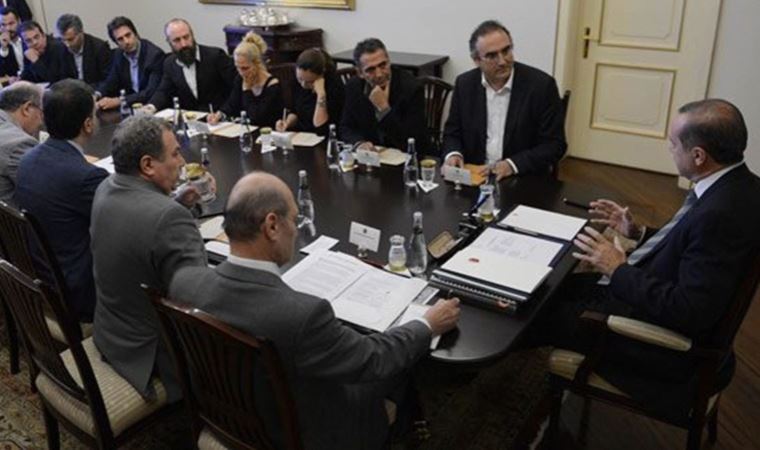 What happened in Taksim Solidarity and Erdogan’s ‘Gezi Park’ meeting?

Our newspaper’s writer Barış Terkoğlu ‘AKP executive defending Gezi Park’ In his column titled, he wrote about the meeting he had with Cem Tüzün, one of the pioneers of Taksim Solidarity.

Tüzün made a statement to Terkoğlu regarding the meeting of eight members of Taksim Solidarity and a group of artists with Erdoğan in Çankaya on 13 June 2013, “Erdogan suddenly got angry… It was as if he was having a crisis. His words were intertwined. Sümeyye Erdoğan and her party members intervened, they took her away.” said.

The relevant section in Terkoğlu’s article is as follows:

“Solidarity was founded one year before the Gezi protests by nearly 200 parties and community organizations that were against the Taksim project.

Erdogan, who was the prime minister at that time, first met with the artists after the protests started. However, the artists could not speak for the activists. With their initiative, on the evening of 13 June 2013, eight members of Taksim Solidarity and a group of artists met with Erdoğan in Çankaya.

Tüzün described the first friction between them and the Prime Ministry as follows:

“They said that only Cem Tuzun and Eyüp Muhcu should come. We objected. We said we would come, four women and four men, representing Solidarity.”

The next contact was on 13 June. Tüzün explains the rest:

“Yavuz Bingöl called and said ‘come to the airport’. When we went, they took us to VIP. We went with the artist-writers on two separate planes for 10-12 people. The friends they objected to were on the second plane.”

Tüzün explains that he tried to make sure that they were brought along along the way:

“The Prime Minister has arrived. He started to make presentations with the videos prepared by the police, who complained about the protesters in Gezi. People behaved reproachfully. The Prime Minister was speaking in a scolding tone. I said, ‘We didn’t come here to listen to the speeches we’ve been listening to for days, we came here to say our demands and find a solution’. I said, ‘Six of our friends came, at the door, if they won’t come, I’m going out too’, I left.”

He relates what follows:

“Mahsun Kırmızıgül came after me and calmed me down. They let us in again with six other people.”

He then recounts the tense moments as follows:

“Arzu Çerkezoğlu asked to speak after me. While he was talking, Erdogan suddenly got angry. He said, ‘Don’t tell me about sociology, how many votes do I get, how many votes do the parties you support get? He stood up angrily. When he got up, everyone got up too. At that time, Beyza Metin said, ‘You can’t talk to a woman like that, know your place’. Erdogan thought that Arzu Çerkezoğlu said it. He turned to her in anger. ‘You know your limits,’ he said. It was like he was having a crisis. The words were getting mixed up. Sümeyye Erdoğan and her party members intervened and took her away.”

All but Tayyip and Sümeyye Erdoğan returned to the hall after a while. AKP Spokesperson Hüseyin Çelik took the floor. He said his suggestions:

“We will wait for the court decision, if a negative decision comes out, we will give up the Artillery Barracks,” he said. “Even if the opposite is true, we will ask the public, we will hold a referendum,” he said.

While those in Solidarity found this positive, they listed their demands. If the court decided in favor of the government, they wanted universities and professional organizations to be asked. On the other hand, they wanted an investigation to be launched against the officers who caused the deaths by using violence against the civilian population, and they wanted the detainees to be released.

“Did you demand that the government resign from Erdogan” I asked. After he said “never”, he told something very interesting:

Obviously, HAS Parti and Kurtulmuş, who later decided to join the AKP, withdrew from Solidarity. Kurtulmus is Erdogan’s assistant today.

Maybe everything could be resolved that night. However, Erdogan’s uncompromising stance made it impossible. He continued his harsh statements. Afterwards, the show of violence by the police on trial for FETO continued. In short, although it is a democratic right to demand the resignation of the government, this was not what the organizers demanded. As a matter of fact, in the decision made on Monday, the button was wrongly buttoned from the head.

Historians write history. Those who direct with their actions are making history. Has anyone ever seen those who tried to make history with the courts win?”