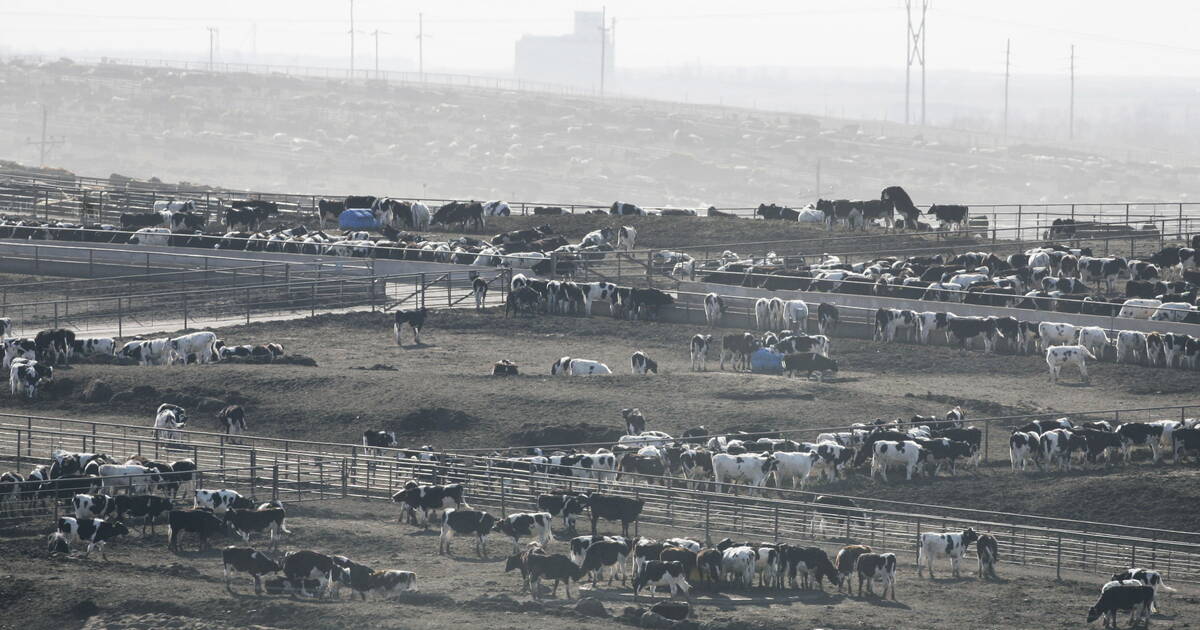 What do we know about the brutal death of thousands of cattle this week in Kansas? – Liberation

High temperatures, but also very low winds and very high humidity are responsible for the mortality of several thousand animals on various farms in the southwest of the state, according to authorities, associations and local veterinarians. .

A video showing a long line of dead black cattle on the side of a road has been widely shared on social networks since the beginning of the week. It is accompanied by messages recounting the death of thousands of animals in southwestern Kansas, attributed to an intense heat wave.

More than 20 states are seeing dangerously hot temperatures impacting nearly 100 million Americans as Reports of Thousands of cattle have died in Kansas due to a dangerous temperatures pic.twitter.com/d7saHEgMrU

The sequence arouses great dismay, but also skepticism: can a heat wave kill so many animals in such a short time, on a single farm? For many Internet users, “it must be something else”. Alternative theories range from water poisoning to the use of secret weapons – a Trumpist blog discerning the hand here “of the illegitimate Biden regime” who would seek “to create national riots before the midterm elections so that they can justify a declaration of martial law or another national emergency”, in “destroying the food supply chain”.)

However, local breeders’ associations and regional authorities confirm that several thousand cows died this week in Kansas due to a major heat wave.

However, no official comment gives any information to better understand the context in which the viral video was shot. However, the local channel KWCH12 specifies that it has received confirmation from a consultant working for farms in the region. “that the video was taken on a farm in the southwest”, and that he had witnessed similar scenes. It also confirms that “many feedlots in the Ulysses area” record deaths related to the heat wave.

When questioned on June 17, the Kansas Department of Health and Environment told CheckNews “have knowledge of at least 2,000 cattle deaths in the southwest state, mostly over the weekend. This figure is representative of facilities that have contacted our agency for assistance with carcass disposal.The ministry thus confirms that this crisis does not only concern one farm, contrary to what some internet users suggested. One of the hypotheses, concerning the images broadcast, could be that the dead animals lined up on the side of the road come from several farms, and not just one. However, the ministry had not been able to provide us with more details on this point at the time of publication.

As KWCH12 notes, while the count of thousands of dead animals is impressive, it should be considered in the light of the gigantic size of the farms in the region, “certain feedlots with up to 120,000 head of cattle”.

“At this time, any figure communicated would be speculative”

Scarlett Hagins, vice president of the Kansas Ranchers’ Association (KLA), also blamed the heat wave deaths in a video shared on social media Thursday: “We cannot confirm the extent of the losses and at this time any figures given would be speculative. This is a very unfortunate event, resulting from a significant change in weather conditions in the region over a short period of time. Temperatures rose significantly, humidity was high, there was little to no wind. She explains that the cattle could not evacuate during the night, which was hot, the heat accumulated during the day. “It’s not normal for this area, which is normally ideal for raising these cattle.” Questioned by several national media, Hagins also confirmed that the city of Ulysses, in the south-west of the state, was affected by these deaths linked to the heat wave, in particular linked to the high temperatures which could reach up to 104°F (40°C).

A University of Kansas veterinarian interviewed by the Associated Press on Thursday confirms that a “isolated weather event, in a specific area of ​​southwestern Kansas”is indeed the cause of death. “Yes, temperatures have increased, but the most important reason why it has been detrimental [pour les animaux] is that we had a huge spike in humidity, while the wind speed dropped substantially – which is rare for western Kansas. It was this sudden change that did not allow the cattle to acclimatize.” The conjunction of these three parameters is also invoked by the Kansas Department of Health and Environment to explain the events.

According to weather records for the city of Ulysses for the past few days, on Saturday June 11, temperatures fluctuated between 17°C in the early morning and 39°C in the hottest afternoon, with more than ten hours consecutive above 30°C, and winds oscillating between 0 and 15 km/h (except for a brief peak above 20 km/h). At night, the air humidity was close to 100% (like the day before and the day before). On Sunday 12, the extremes were between 21°C and 39°C, with eleven consecutive hours above 30°C, and winds similar to Saturday. Monday 13, temperatures went from 25°C to 40°C, with seventeen consecutive hours above 30°C (from 7 a.m. to midnight), and maximum winds of 35 km/h.

Jess Shearer, a veterinarian working with local farms interviewed by KWCH12 on Friday, noted that “it is usually during the first weeks of June that we see these animals being affected by the heat”. She also judges that the high temperatures are not the only cause – higher temperatures being recorded during the summer – but also and above all the humidity, due to the rain which preceded the heat wave. And to explain that there was no need to theorize a “conspiracy” to explain this rare event. “When all these parameters come together, it sometimes happens,” she considered.

Associated Press, like KWCH12, notes that many cattle “had not yet lost their winter coat” during this heat wave. In the same vein, another parameter is certainly taken into account: the color of the animal’s coat. As confirmed, without hardly any surprises, by various studies carried out over the past two decades, cattle with black coats are also the ones whose bodies accumulate the most heat in the sun, and which suffer the most from the effects of the heat wave.

In her exchanges with the media, the vice president of the Kansas cattlemen’s association clarified that heat-related deaths are usually “rare in the industry, because farmers are taking precautions, including providing extra drinking water, changing feeding schedules so animals don’t digest during the heat of the day, and using cooling systems. watering to cool them.”