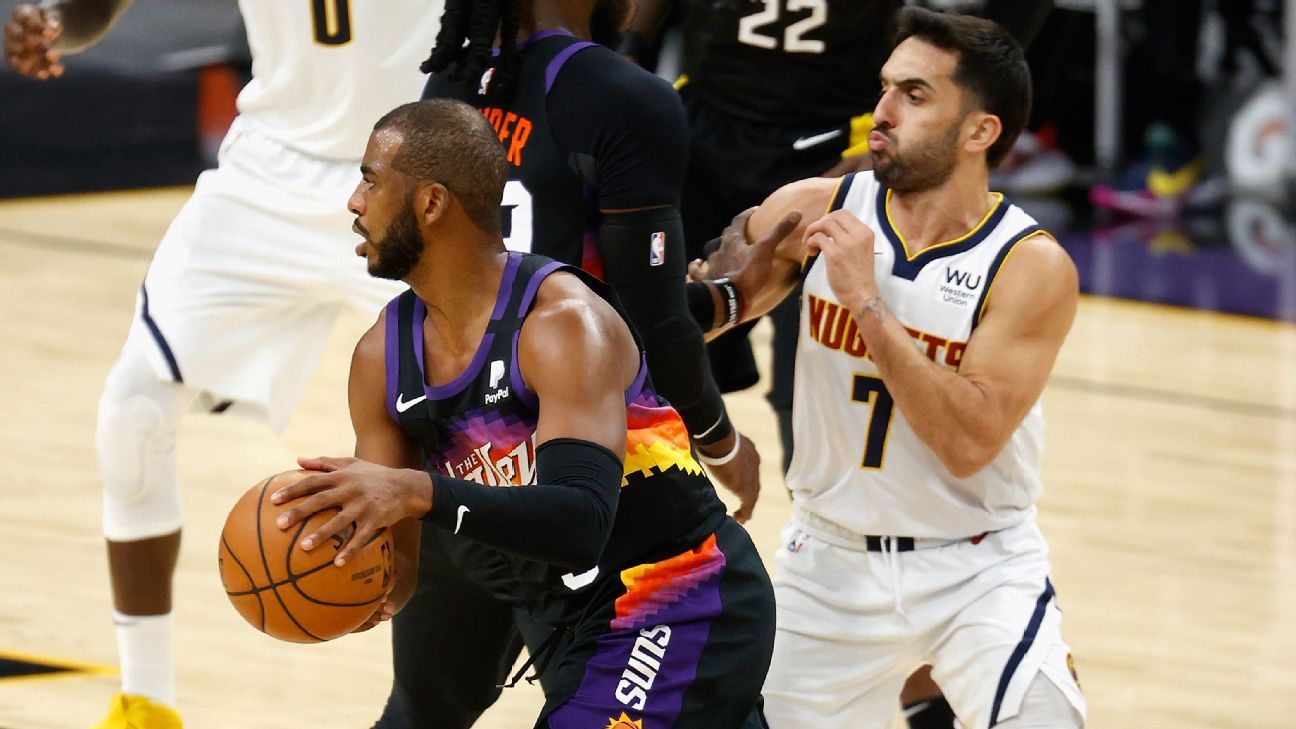 The difficult series in which the Denver Nuggets managed to overcome the Portland Trail Blazers is now a thing of the past. Facundo Campazzo’s team will begin its duel against the Phoenix Suns for the Western Conference Semifinals on Monday.

Phoenix comes from beating the Los Angeles Lakers in six games. The Suns had not won a playoff series in 11 years. What better way to break that streak than by eliminating the last few champions? To achieve this, those led by Monty Williams relied on a sensational Devin Booker: 29.7 points and 5 assists averaged per game in the first postseason series of his career. To sentence the Lakers, Booker converted 47 points in Game 6, with 8 triples.

One of the dilemmas Michael Malone faces, then, is how to stop the Suns’ star guard. The most reliable options to defend him are Austin Rivers or Aaron Gordon.

Phoenix’s conductor is undoubtedly Chris Paul. The veteran point guard is the one who determines the rhythms of each game and distributes the ball at will. Of course, he is also a threat with his launch, both from three points and from medium distance. The problem for Paul is that he has dragged a right shoulder injury from the opening game of the first round. Grieved by this situation, the Suns point guard averaged 9.2 points per game against the Lakers, with a 38.6% shooting effectiveness and a very low 20% in triples. Campazzo and Monte Morris appear as those in charge of trying to stop Paul.

The recent antecedents between these two groups must be observed with conditions. The Nuggets were practically another team, mainly because they had Jamal Murray, already ruled out for the rest of the season. In addition, Will Barton III and PJ Dozier participated, who could return from their injuries at some point in the series.

See also  Critical warning from Meteorology with Istanbul and many

The three clashes were in the month of January. On the first day of the year, Phoenix won 106-103 on the road. Between Deandre Ayton, Booker and Paul they added 65 points. Canadian Murray was the top scorer of the game with 31. Campazzo, barely played 3:53 minutes, suffered Paul on defense and did not score. At that meeting, Michael Porter Jr. was not available for Denver. It was just the fifth game of the season for the Nuggets.

The other two games were on consecutive days. On January 22, Denver won 130-126 in overtime on the road. The top two scorers were Booker and Nikola Jokic, both with 31 points. Campazzo, in the shadow of Murray, played 7:07 minutes with 1 assist and 1 steal as a contribution.

On January 23, the Nuggets won again at the Suns stadium, this time 120-112 in a supplementary double. While all five Phoenix starters scored in double figures, Jokic and Murray stood out in Denver with 29 and 26 points respectively. Campazzo played more than in previous games (14:46 minutes) but his numbers were discreet (3 points, 1-3 in triples and 2 assists). Booker did not participate in that game.

Regardless of changes in the campuses and absences, there is a duel in which it is possible to focus on the recent past: Jokic against Ayton. The Serbian, great star of the Nuggets and MVP candidate of the season, averaged 25.7 points, 13.7 rebounds and 8.3 assists per game against the Suns, with 50.8% in shots from the field and 50% in triples. For his part, the Bahamian of the Suns showed a great performance against the Nuggets with averages of 22 points and 12.3 rebounds per game with a 70% effectiveness in his shooting.

The reality of Campazzo is very different from the one that went through in those crashes of the first month of the year. The Argentine is the starting point guard for Malone’s team since Murray was injured. Facu averaged 9.3 points (34.6% on triples), 5.2 assists and 3.3 rebounds in the series against Portland.

The picture is level, with Phoenix holding the field advantage for having ranked second in the regular season, while Denver was third. The Suns will be local in the first two games of this best-of-seven series. The third and fourth will be played at the Ball Arena in Denver. Then, if necessary, they will intersperse the home until one of the two achieves the four victories that deposit them in the Conference Final.