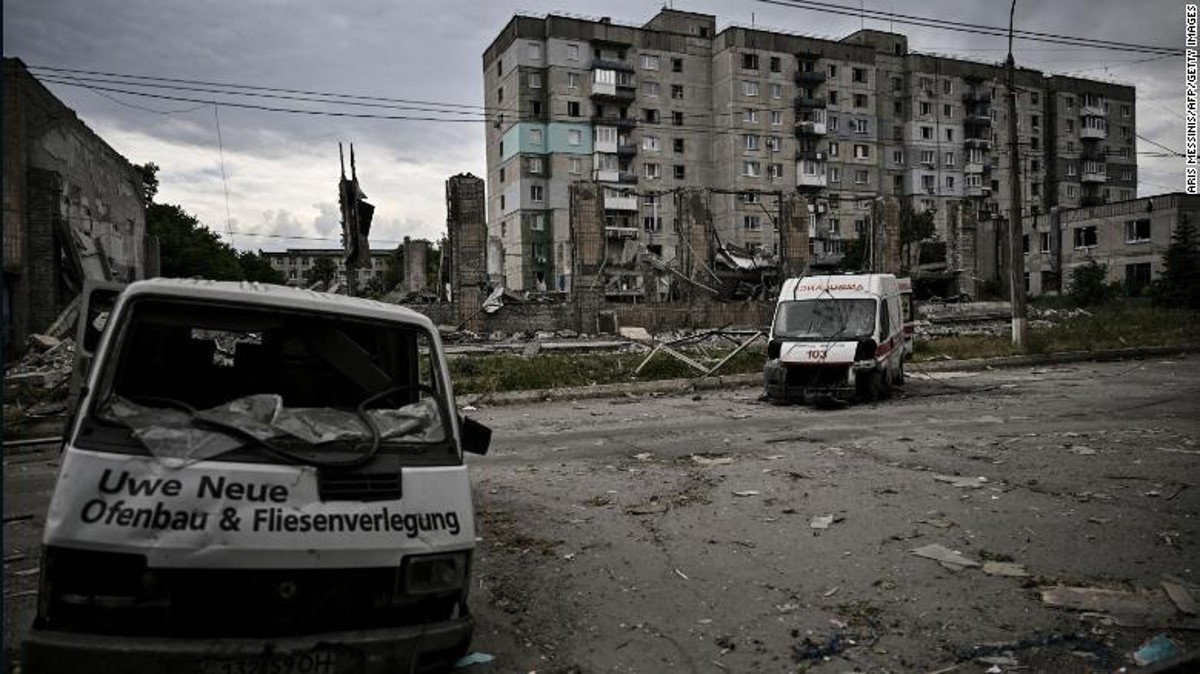 Western support for Kyiv must not cease, NATO says

(CNN) — The West must prepare for a long war in Ukraine as Russia makes incremental gains in a furious battle for control of the country’s east, NATO Secretary-General Jens Stoltenberg and British Prime Minister Boris Johnson said.

Stoltenberg told the German newspaper Bild am Sonntag that no one knew how long the conflict would last, but “we must prepare for the fact that it could take years.”

“We must not stop supporting Ukraine. Even if the costs are high, not only because of military support, but also because of rising energy and food prices.”

Boris Johnson, writing in the Sunday Times after his second visit to Kyiv on Friday, said Western allies must “prepare for a long war as Putin resorts to a campaign of attrition, trying to crush Ukraine with sheer brutality.” “.

Johnson said taking over all of Donbas, which covers much of eastern Ukraine, had been Putin’s goal for the past eight years “when he ignited a separatist rebellion and launched his first invasion.”

While Russia has not yet achieved this goal, “Putin may not realize it, but his grand imperial design for the total reconquest of Ukraine has been derailed. In his isolation, he may still think total conquest is possible.”

Both men emphasized the need to prevent future Russian aggression.

Stoltenberg said: “If Putin learns the lesson from this war that it can continue as it did after the Georgia war in 2008 and the occupation of Crimea in 2014, then we will pay a much higher price.”

Johnson asked what would happen if President Putin were free to keep all areas of Ukraine now controlled by Russian forces. “What if no one was willing to lift a finger while he annexed this conquered territory and the people fearful of it into a larger Russia? Would this bring peace?”

Johnson said that through strong long-term support for Ukraine, “we and our allies will protect our own security as well as Ukraine’s and safeguard the world from the deadly dreams of Putin and those who might try to copy them.”

Johnson wrote: “Time is the vital factor. Everything will depend on whether Ukraine can strengthen its ability to defend its soil faster than Russia can renew its ability to strike. Our task is to buy time on the Ukraine side.”

On Sunday, Ukrainian officials said heavy fighting continues in the city of Severodonetsk — the epicenter of the bloody battle for Ukraine’s eastern Donbas region — and surrounding communities as Russian forces try to break resistance from Ukrainian defenders and capture parts of the eastern Luhansk region that they do not yet control.

Serhii Hayday, head of the regional military administration, said “battles for Severodonetsk continue” and that the Azot chemical plant, where some 500 civilians are sheltering, had been shelled again.

Smoke and dirt rise from the city of Severodonetsk on June 17.

A Ukrainian serviceman walks along an entrenched position on the front line near Avdiivka, Donetsk region, on June 18.

The Russian operations appear designed to break through the Ukrainian defenses south of Lysychansk and Severodonetsk, cutting off the Ukrainian units still defending the two strategically important cities.

To the west, in the Donetsk region, also in Donbas, the Ukrainian military reported further shelling of Ukrainian positions near Sloviansk. There was also a missile attack in the area, according to an operational update from the Ukrainian General Staff. But there seems to have been little change in the front-line positions.

Stoltenberg was cautiously optimistic that Ukraine could turn the tide of the war. “Although Russia is fighting the battle in Donbas more and more brutally, Ukrainian soldiers are fighting bravely. With more modern weapons, it increases the probability that Ukraine will be able to expel Putin’s troops from Donbas again.”

Ukraine’s military has been burning Soviet-era ammunition that is retrofitted to older systems. As Western weapons systems arrive, Ukraine’s President Volodymyr Zelensky warned this week that they must arrive faster, as Russia builds up a significant artillery advantage around Ukraine’s two eastern cities.

US officials insist that Western weapons continue to find their way to the front lines. But local reports of weapons shortages, and frustrated pleas from Ukrainian officials on the front lines, have raised questions about how effectively the supply lines are working.

The Joe Biden administration announced Wednesday that it would provide an additional $1 billion in military aid to Ukraine, a package that includes shipments of additional howitzers, ammunition and coastal defense systems. While the UK “plans to work with our friends to prepare Ukrainian forces to defend their country, with the potential to train up to 10,000 soldiers every 120 days,” Johnson said.

While Russia has been making significant gains in eastern Ukraine, Johnson emphasized the wear and tear on Russian forces in the grueling battles, saying it would take Russia “years, maybe decades, to replace this hardware. And hour after hour, Russian forces Russian companies are using up equipment and ammunition faster than their factories can produce it.”

In late May, Ukrainian officials said Russian units were being reinforced by Soviet-era T-62 tanks, which appeared to have been pulled from storage.

The British prime minister added: “The UK and our friends must respond by ensuring Ukraine has the strategic resilience to survive and eventually prevail.”

It laid out four essential steps to support Ukraine, including: preserving the Ukrainian state, which includes: ensuring that the country receives “weapons, equipment, ammunition and training more quickly than the invader and develop its ability to use our help”; a “long-term effort to develop” alternative land routes to overcome “Russia’s stranglehold on Ukraine’s economy by blocking its main export routes through the Black Sea.”

NATO Secretary General Jens Stoltenberg wrote that a new strategy concept will be adopted during an upcoming NATO summit that will declare Russia “a threat to our security, peace and stability.”

This weekend, Zelensky visited the front lines in the coastal city of Odessa and the southern city of Mykolaiv, which are Russian targets in their bid to seize the Black Sea coast.

Johnson added that the Russian blockade of Black Sea ports meant that some “25 million tons of corn and wheat, the entire annual consumption of all the least developed countries, are piling up in silos in Ukraine.”

On the upcoming NATO summit in Madrid, Stoltenberg said a new strategy concept will be adopted “which will declare that Russia is no longer a partner, but a threat to our security, peace and stability.”

He said that “Russia’s nuclear saber rattling is dangerous and irresponsible. Putin must know that a nuclear war cannot be won and should never be fought.”