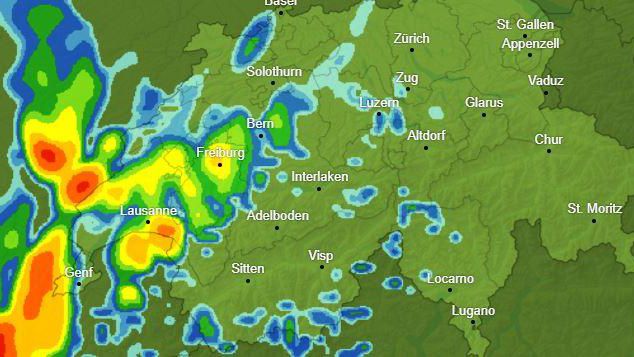 Weather: The next wall of thunderstorms is rolling in from the west

Wetter: The next thunderstorm wall rolls in from the west

In the evening, thunderstorms are expected over a large area, especially in the northwestern part of Switzerland. This will be the start of a rainy end to the week.

If the morning on Wednesday is still mostly sunny, more showers and thunderstorms coming from the west are expected in the afternoon. Strong thunderstorms may also occur locally, especially in western Switzerland and Ticino.

there is a risk of hail

These thunderstorms are caused by two low pressure areas which are now slowly entering Switzerland from France and the Po Valley. In central and eastern Switzerland it is initially foggy, in the evening there may be more precipitation, some of which will also bring hail, as Klaus Marquardt from Meteonews says.

Thursday in particular can then bring greater amounts of rain. Lots of clouds and partly heavy rain showers are expected throughout the day. According to forecasts, the precipitation will only decrease from the west on Friday afternoon.

However, the exact amount of precipitation is difficult to predict, because local thunderstorms in particular cause larger local differences. Some forecast models assume only 20mm of rain between Monday and Friday, while others assume three times as much. Especially in the latter case, the risk of forest fires would decrease, at least locally.