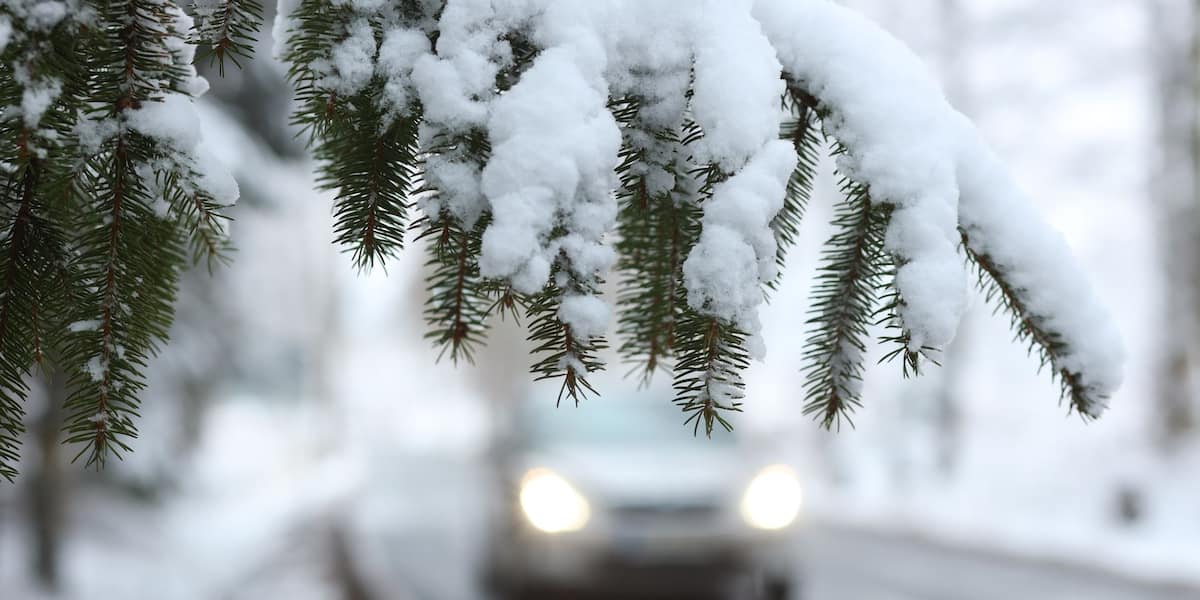 Weather conditions in the ticker

After January had been rather mild up until now, winter is now making its way back to Germany. Colder North Atlantic air brings snowflakes with it and causes accidents throughout Germany. But the cold weather also has positive sides: Many ski lifts are open again. The news in the weather ticker.

Because of the onset of winter: ski lifts on the Fichtelberg have started again

Thursday January 26, 2023 6:38 am: The ski lifts on the Fichtelberg are back in operation. “It started at nine o’clock,” said the manager of the Fichtelberg suspension railway, René Lötzsch, on Wednesday. He was satisfied with the crowd. “There are some school classes and vacationers who take advantage of the good conditions,” said Lötzsch. In the past few days, the slopes have been snowed.

In December, frosty temperatures initially offered good conditions for preparing the slopes, not only in Oberwiesenthal, Saxony’s largest alpine ski area. As a result, the season was opened there on December 16th. However, that was short-lived and the last lift was closed again on December 24th after the thaw and rain.

Now the weather on the Fichtelberg will probably remain suitable for skiing for the time being. Sunny weather and temperatures around freezing are expected on Wednesday and Thursday, said a spokesman for the German Weather Service (DWD) on Wednesday. The snow cover is currently about 20 centimeters thick. From Thursday to Saturday another five to seven centimeters of fresh snow could be added.

However, the clouds would probably become more compact again from Thursday afternoon, said the DWD spokesman. “Best ski weather” is therefore not to be expected. It will probably get colder by the weekend. For Friday and Saturday, minus five degrees is to be expected. At night, the temperature can drop to minus eight degrees.

6:10 p.m.: Motorists in large parts of North Rhine-Westphalia have to be prepared for slippery roads on Thursday night. The German Weather Service (DWD) in Essen warns of a cold front that will bring snow, sleet and freezing wet weather. The temperatures drop to -3 degrees Celsius at night, the coldest is -7 degrees in the Eifel and Sauerland, the meteorologists said on Wednesday afternoon.

From midnight a band of rain will move east from the Netherlands across NRW, which can make the roads dangerously slippery. Freezing foggy wetness is also possible in the mountains. In the further course of the night, rain showers and slippery roads must also be expected in the south-east, according to the DWD.

Morning commuter traffic is likely to be affected by the rainy winter weather: rain and sleet alternate Thursday morning. In East Westphalia, the Sauerland and in the Eifel, one to three centimeters of fresh snow are also possible. Only in the afternoon does it get a little warmer from the north-west with slightly plus degrees and maximum values ​​of up to 6 degrees on the Lower Rhine. Then, according to the DWD, the rain should have stopped.

8:30 a.m.: In the middle of the week it will remain gray and cold in Rhineland-Palatinate and Saarland. On Wednesday it was mostly overcast and dry during the day, said the German Weather Service (DWD) in Offenbach. The temperatures reach a maximum of zero to six degrees. It remains cloudy on Thursday night, but drizzle and black ice are possible locally with lows between zero and three degrees.

On Thursday the gray weather with many clouds will continue. From midday light snowfall of one to three degrees is to be expected. In the lowlands, the snow sometimes mixes with rain.

Wednesday, January 25, 08:25: In the coming days, people in Hesse can expect more gray winter weather. On Wednesday it will be mostly overcast and dry during the day, said the German Weather Service (DWD) in Offenbach. The temperatures therefore reach a maximum of zero to four degrees. In the night to Thursday it remains very cloudy with lows between zero and minus three degrees. In the mountains, therefore, drizzle and black ice are possible.

On Thursday cloudy weather with lots of clouds will continue. From north-west to south-east there will be light snowfall with maximum values ​​between one and three degrees. In the mountains, the meteorologists expect about one to three centimeters of fresh snow.

11:27 am: According to the German Weather Service (DWD), the fresh snow that fell in many places over the weekend usually does not stay put. According to the information, it is likely to melt again in the coming days due to the expected slight plus degrees, especially in southern Germany.

In the low mountain ranges above about 400 to 500 meters, “it looks better with mostly light permafrost,” said a DWD meteorologist on Monday in Offenbach. The snow cover could probably hold there.

At the weekend, heavy snowfalls lured winter sports enthusiasts to the pistes and cross-country trails in the Harz Mountains, the Allgäu Alps, the Bavarian Forest, the Sauerland and the Rothaar Mountains, among other places.

According to the DWD, further snowfalls are not to be expected at first. Cloudy, dry and “overall calm winter weather” will prevail until Wednesday, said the meteorologist. It was not until Thursday night that rain started to pick up again on the North Sea, which increasingly turned into snow on the way to the center of the country.

Dry, cold weather expected at the start of the week

Monday, January 23 at 5:53 am: At the beginning of the new week, the influence of a high pressure area in Germany ensures largely dry weather. “The temperature is still at winter levels,” said Jacqueline Kernn, meteorologist for the German Weather Service (DWD) in Offenbach, on Sunday. Slight plus degrees can therefore be expected during the day on Monday. It stays mostly dry. Only in the vicinity of the Alps should there be some snowfall.

In addition to clouds, there will also be some loosening on Monday, especially in the south-west half. The temperatures reach a maximum of minus 2 to plus 4 degrees, in the higher mountains it is also colder. Strong gusty winds are possible in the southwest and at higher altitudes, and even squalls on mountain peaks.

On the night of Tuesday, the meteorologists expect widespread light to moderate frost at temperatures between minus 1 and minus 8 degrees. The roads can be slippery in places. According to the DWD, Tuesday will be cloudy but dry. Maximum temperatures of zero to six degrees can be expected.

On Wednesday, high fog often covers the sky, but according to the DWD it also loosens up in some cases. With highs of minus 1 to plus 4 degrees, it stays dry. In the afternoon dense clouds will gather in the northwest, rain is possible near the coast in the evening.

Winter has Bayern under control and causes over a hundred accidents

16.30 o’clock: The snow is back in the Free State and led to more than 100 accidents on the roads over the weekend. Four people died in head-on collisions on Friday: the accidents near Penzberg (Weilheim-Schongau district) and Weißensberg (Lindau district) ended fatally for three men and one woman. In the mountains, the risk of avalanches increased due to the fresh snow. At the beginning of the week, according to the forecast of the DWD meteorologists, it will remain largely dry, but there could be snow grains locally. Caution is therefore still required on the roads.

The police headquarters recorded the majority of weather-related traffic accidents on Saturday night. According to police estimates, at least 91 accidents due to slippery roads with mostly minor injuries totaled around 400,000 euros in damage. On the night of Sunday, around a dozen other accidents with minor injuries were added.

According to the police, a couple’s car collided head-on with a van near Penzberg on Friday afternoon. The two 71 and 74-year-old inmates died. An eight-year-old child in the couple’s car was slightly injured, as were the two people in the van.

Two people were also killed on federal highway 31 near Weißensberg. A 40-year-old had hit oncoming traffic with his van for reasons that have not yet been clarified and, according to the police, crashed head-on into an oncoming semi-trailer. He and his 38-year-old passenger were fatally injured. The driver of the van suffered minor injuries.

11:31 am: “If you want to see winter, you have to go to the Harz Mountains.” There was a total of 18 centimeters of fresh snow there, said meteorologist Jens Oehmichen from the German Weather Service (DWD) on Sunday. But not only in the Harz it was wintry at the weekend. In the south of Bavaria and in North Rhine-Westphalia, too, white pistes lured many recreational athletes outside.

At the start of the new week, the experts are still expecting some snow, at least near the Alps. The daily highs should then be minus 2 to plus 4 degrees, in the higher mountains sometimes even lower.

On Saturday, fresh snow had fallen on the peaks in the Allgäu Alps and in the Bavarian Forest. In some places it was icy, for example in Bodenmais or on the Ochsenkopf in the Fichtelgebirge with minus seven degrees. With a more or less thick soup of fog, the visibility was moderate, but many winter sports fans were not put off by this.

While the recreational athletes were happy about the snow, drivers shivered from the black ice on the streets: there were traffic accidents in many places, but only a few people were slightly injured. Four people died in accidents in Bavaria, but it was initially unclear what role the weather played in these cases.

In the neighboring Czech Republic, Poland and Slovakia, heavy snowfall caused widespread power failures and traffic accidents. Several people lost their lives. According to media reports, more than a hundred thousand households in Poland were temporarily without electricity.

You can find more information about the weather conditions on the next pages.