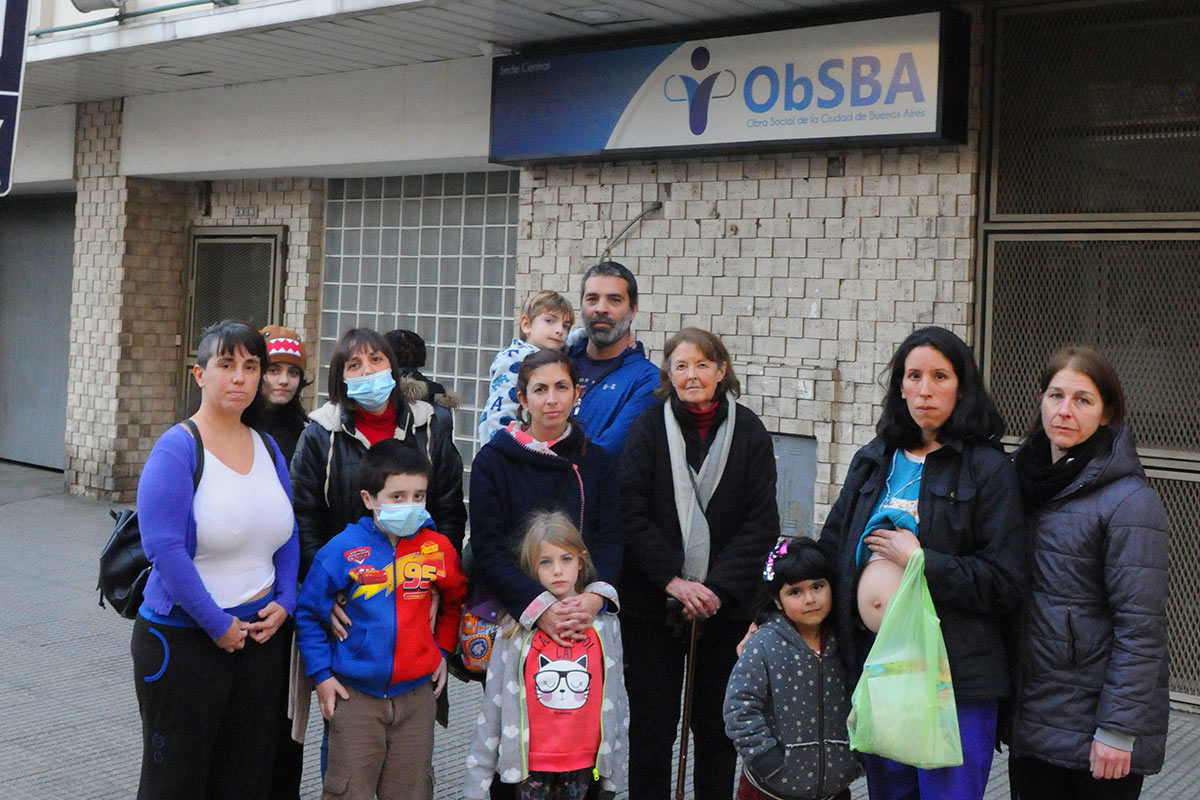 “We don’t get the medical attention we deserve”

Every Monday at eight in the morning she takes her son to therapy. Returning home, they eat breakfast, do homework, play games and have lunch, before heading off to school. At the end of the school day, she picks up her son from school, they have a snack and start their way to Occupational Therapy. On Tuesdays the psychomotor specialist awaits them, on Wednesdays the speech therapist and on Thursdays another psychomotricity session. The Scalora family’s routine was organized around seven-year-old “Lolo”, who suffers from developmental language disorder (DDL) and who needs constant treatment to improve her quality of life and her bond with society. «The educational psychologist told me that in these conditions she can no longer attend to him, and we have not attended this treatment for several months. The rest of the professionals continue to attend to him, although they haven’t been paid a peso for eight months,” he tells Weather Mariela, the mother. She is a teacher in a public school in Buenos Aires, and like the majority of state workers in the district, she only has medical benefits from ObSBA, the Social Work of the City of Buenos Aires.

Delays in the payment of benefits mean that Lolo’s medical follow-up is often interrupted. «The therapists ask me to claim the payments from the social work, every week I call and they tell me that I must contact EXSAL Salud, which is the privatized ObSBA. I do it and they tell me that I have to claim in the social work, and that’s how they pass the ball », he adds. The situation that Mariela Scalora and her family are going through, is suffered by around 300,000 porteño workers affiliated with ObSBA, which in recent years has suffered a process of emptying. The deterioration of ObSBA began in the first term of Mauricio Macri as Head of Government of Buenos Aires, but it deepened severely during the two administrations of Horacio Rodríguez Larreta. Those who are in the directory assure that in two or three months ObSBA can disappear.

Of the total number of affiliated workers, around 110,000 are teachers and assistants in public schools in the City, the rest come from other sectors and many of them are already retired. The state ObSBA contribute 6% of their assets monthly while the rest of the social works retain 3%. The affiliates affirm that they are hostages of this social work, that if they want to switch to another they continue to suffer withholdings on their salaries. In recent years, ObSBA authorities have terminated an untold number of medical and pharmaceutical benefits across the country. Professional attention in Dentistry, Mental Health, Ophthalmology, Endocrinology and other specialties was reduced by 60%; they dismantled the Méndez Sanatorium, the main medical care facility in CABA; they stopped offering 100% coverage for chronic medications; tourist residences were closed, and hundreds of workers were laid off.

See also  Vitamin B12: If you wake up like this after a "good" night's sleep it could be a sign of a deficiency

Mario Diamonte and Blanca Nissin have been affiliated with ObSBA for forty years. They are both retired and she retired as director of primary school in the City of Buenos Aires. In 2019 they decided to settle in Valle de Calamuchita, Córdoba, in search of a treatment for Blanca, after being diagnosed with an irreversible neurodegenerative disease. “When we came here we found ourselves with the situation that there were no ObSBA providers, therefore we had to hire the professionals to provide my wife with the necessary care,” she tells Weather Mario, that after a series of procedures, authorizations and sending of invoices, the work of the City reimbursed the expenses. Reimbursements came later and later as Blanca’s illness progressed and her health deteriorated. “Last year my wife was hospitalized at home with six people caring for her. At first these professionals were directly authorized by ObSBA but over time they changed the structure and we had to settle with a privatized one called Bien Salud », he adds. Blanca’s medical care represented expenses of hundreds of thousands of pesos per month that they both paid with their pensions, and ObSBA reimbursements were up to ten months late. “This was practically a person abandonment because those who cannot pay their own benefits are totally destitute.”

Blanca passed away on May 29 of this year and Mario is still waiting for ObSBA to take care of all the benefits, given that the last “partial” reimbursement he received corresponds to the month of December. The social work maintains a significant debt with Mario: “Thousands of older adults are unable to do all this type of paperwork and payments, therefore they are condemned to not receive the medical care they deserve,” he concludes.

The ObSBA was created in August 2000 through the sanction of Law No. 472. It was established as the continuation of the Municipal Institute of Social Work (IMOS), and behind closed doors it is organized as a mixed administration institute with public law capacity. and private; It has legal individuality, administrative, economic and financial autarchy. Article 6 of the Law stipulates that both the president and the rest of the board of directors are appointed by the head of the Government of the City of Buenos Aires. On January 7, Larreta appointed through decree No. 13/22, Juan Carlos Cela as president of ObSBA. From the government they assure that the appointment came to correct so many years of mismanagement, but the facts show that everything got worse.

Ana Belinco has been a teacher for 17 years and has a severe immunodeficiency due to being splenectomized, after having had her spleen removed to correct an autoimmune pathology called “idiopathic thrombocytopenic purpura”. «I had to call Vittal emergencies while I was studying a case of alleged Covid, I say course because I swabbed myself at a GCBA post and they never sent me the result, and despite the fact that I said that I was immunocompromised and asthmatic from birth, that I had been three days ago With a fever of 40 and breathing difficulties, they told me that they were going to attend me by video call.” Vittal is another third party where ObSBA refers the emergencies of its members who, in addition, must pay for the service before being attended by zoom. “I have not yet accounted for everything I spent on those video calls, they left me waiting for hours, they charged me, but they never attended me until I fell asleep in the middle of a total panic attack. I woke up the next day and the fever had gone down. No one called me from Vittal to see if I was still in this world, let’s say.

Ana’s mother is retired and was waiting months for a very expensive treatment “that a retired person and I as a teacher cannot afford, and only after we started to mobilize and make a mess they authorized it,” she concludes bitterly. «

Each Buenos Aires state contributes 6% of their assets to receive the services of ObSBA, unlike the rest of the social works that receive 3% of the salary. The percentage difference is explained by the fact that active workers support the medical care of retirees. Due to this situation, they made legal claims, in addition to demanding the participation of all the unions in the internal organization of the Work as required by Law.

See also  if you catch the Covid after the first dose, here's what happens

In recent months, thousands of affiliates have organized to denounce the emptying of ObSBA and the possibility that, in the face of a bankruptcy filing by the entity, they will lose the little coverage they have. At the same time, they denounce that they were abandoned by the Buenos Aires unions, which is why they formed the self-convened group of Workers and affiliates in defense of ObSBA. “The situation is very serious, Juan Carlos Cela himself, who presides over the social work, said that in two or three months ObSBA tends to disappear,” Zulma Lovay, member of ATE Capital of the Fernández Hospital, tells Tiempo.

on the verge of bankruptcy

Despite having a mixed organization with public and private law capacity, and with administrative, economic and financial autarky, the macrismo managed to dismantle that structure, and in 2008 the social work intervened.

It was former President Mauricio Macri himself who initiated this process after a favorable ruling by the Buenos Aires justice system.

The intervention ended on March 10, 2009 and the majority union Sutecba regained control, in political alliance with the macrismo.

Currently the social work is on the verge of bankruptcy with a millionaire debt that would exceed 5,000 million pesos, a figure contracted mostly based on ghost contracts.
The acceleration of the debacle points to Walter Correa (former driver of the head of the Buenos Aires government Rodríguez Larreta), who had been chosen at the time by the current president.