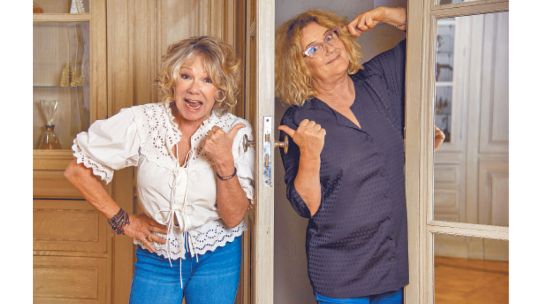 “We are two actresses with a lot of character and different”

After the premiere in 2021 when the theaters still had reduced capacity and after touring numerous cities in Argentina, Dos locas de remate returned to the stages of Buenos Aires. The play takes place at the Teatro Astral from January 6. The chemistry that Soledad Silveyra and Verónica Llinás achieved together in this piece constitutes an event in itself, which adds to the agile text by Ramón Paso, directed by Manuel González Gil. These two actresses with a great career and dissimilar styles come together for a work where humor does not hide but rather exposes human weaknesses within family ties, in this case, between two sisters.

—What does it mean to do the summer season in Buenos Aires? How do you face this way of doing and living the theater?

Soledad Silveyra: We are used to it. Last summer we did Mar del Plata and Buenos Aires. We haven’t done the work for more than two months; we have to review; Throughout this national tour that we did, we changed things. We are to improvise a bit; sometimes we incorporate the public. I don’t know what Manuel will say when he sees it, hehe.

Verónica Llinás: On the tour, we did very well; Also, when we were in Buenos Aires. We started right with the return of the pandemic. We look forward to continued success. We must not lose hope, as our fabulous team has shown.

—How is the character of each of you?

S: My character is an apparently very weak woman, who has done very badly in life, lost everything, and was left on the street. She is very intelligent, she is not her: she is short. She has a huge need for her sister to shelter her. But from that weakness that she has, she gets her sister to change too. Our play is about family. Although it is about a sisterly bond, the mother appears, the daughter appears, the assistant appears. People stop, shout, celebrate, it’s very exciting. I cry every night, with emotion, because of what happens to people.

L: My character is Julia, she is the younger sister. She is very successful professionally, because she is a violinist who has a very good reputation. But she has a lot of hobbies, tocs, tics and social, racial prejudices, she is very discriminatory, she devalues ​​her sister, who stayed under her mother’s wing, taking care of her. Catalina, who is the character of Solita, did not develop any activity of her own. My character, who thinks she is superior, is suddenly shaken by this other one; those things somehow modify it. It is an encounter within disagreements.

—In this dramatic situation, how does laughter arise?

S: What generates laughter are the atrocities they do. Vero’s character has many knocks; people laugh a lot. But it is the bond that generates laughter, how one humps the other, how they fight. People laugh a lot for an hour and twenty, but they reflect on his own family, because the work is basically hard. We received on Instagram: “I made up with my old lady”, “I was able to talk to my father”, “we had a meeting of brothers”.

L: Everything is in the form. We interpret seriously, as if we were doing Shakespeare, but the situation is absurd. Also, it’s like a compendium of a lot of situations in families, which can become a bit ridiculous and therefore hilarious. The fights that these sisters have escalate to tremendous places – I think people identify so much

—How has the process of working with each other been?

S: We have fought, we have insulted each other, we have done four analysis sessions. It cost us a lot. We are two actresses with a lot of character and very different, but we have very similar values. The important thing is to put the ego aside, build for the work. We have understood that. It is a work that has to do with the conscience of the other, with not working alone, but working with the other.

L: With Solita, despite coming from very different theatrical backgrounds, being very different people, and having had difficult times as well, we are very proud that we were able to find a way to know what to do with our differences and to deal with them. and to understand that we have to be together.

—Do you have rituals to start each performance?

L: I don’t do anything. I mean, I’m not one to arrive too early. I recriminate that to myself; I don’t say it as “I’m barbarian”. I am very anxious. So if I have to wait a long time to act, I’m lightning. I have to have a time that is not so much, because if not, I get tremendous anxiety. Afterwards I am not one to warm up the voice, nor warm up the body, I am everything that should not be done. And I have, yes, some cabals, but none that say “this is going to be a success, how well it is going to work”. The word “success” seems tremendous to me. So, I touch my breast, I knock on wood, I do anti-mufa rituals. Before entering the scene with Solita, with Sarita, who is our dressing room, plus Juancito, stage manager, we touch hands, we do a kind of small rally before leaving. If there is not that, I get bad. Sarita touches Solita’s and my tail, she gives us a little squeak on the tail: that also has to happen always.

See also  The most valuable of the house! 134 percent increase in 6 months

—Although they are doing theater, they have a very intense bond with the cinema. How have you experienced the resolution around Incaa at the end of 2022?

S: It was a happy resolution. It was a conflict that had been going on. In any case, I think that the Film Institute needs, like all state agencies, good management, that is, appoint managers, people who know, and leave partisanship aside, that the credits be given accordingly to the best scripts and no, best friends.

L: It was a relief. For me, it would have been very screwed if that was not perceived more. It is very difficult to make films: all culture in general, but particularly cinema, is a very expensive activity. Although filmmaking does not exist now, it is a very expensive activity, and there is little help, promotion. It is very uphill for people who are starting out and also for people who have already made a certain path. Now the platforms are taking over a lot, but that also leads to a “platform mode” that is particular, but also restrictive. That the Incaa has money to make other types of films seems to me to be very good.

—Verónica, what repercussions are you having from your participation in the series El fin del amor?

L: The series, I knew it was going to have a very good impact, first, because Lali Esposito is a total star and is in her moment of explosion. In addition, the product is interesting, cool and touches on a topic that is not usually addressed. What embarrassed me is the feedback from my character, which was not flashy. I’m used to displaying histrionics, but this character is an ordinary mom, with no comedy scenes. However, what people give me back is actually very comforting.

See also  Alvarado killed, disappeared, stole and tortured just like in the dictatorship

—Lonely, how is Vero?

S: Vero is a wonderful actress, a great humorist, a woman who knows how to delegate. She has a very strong character, very strong, and at the same time she is a girl. Deep down, we’re both girls, but I’m more of a girl than Vero. Vero has energy, strength. The characters accompany us: mine is weak, a poor wretch; Vero’s is a winner who doesn’t care about the other. Vero has some things about the character, but, above all, she is an actress that she deeply respects. Both of us, with a lot of patience, have managed to work together. It does not mean that we will not discuss again, but it is discussing to build.

—Vero, how is Solita?

L: Solita is a wonderful actress. Afterwards, she is a very special person. She is the most distracted, hung-up person I’ve ever seen in the world. For this very reason, she is very captivating, very little masked, very transparent, which is very important to me. When she has an outburst, she later asks for forgiveness. The two people are quite strong and with egos on stage, but at the same time we are both alive enough to understand that we need each other. Alone is very emotional. Out there, for her I am too cold. I carry her and tell her: Llorita Silveyra. Plus, she’s deeply popular: people love her, love her, and she loves being loved and she interacts with people and she worries and asks and wants to know about every town she goes to. She intends to hug the people from her. Regarding working together, we managed to tame our egos to understand that the work is a common job. This is what the soccer team that won the World Cup showed us, and what is not happening in the political and social sphere in the country.