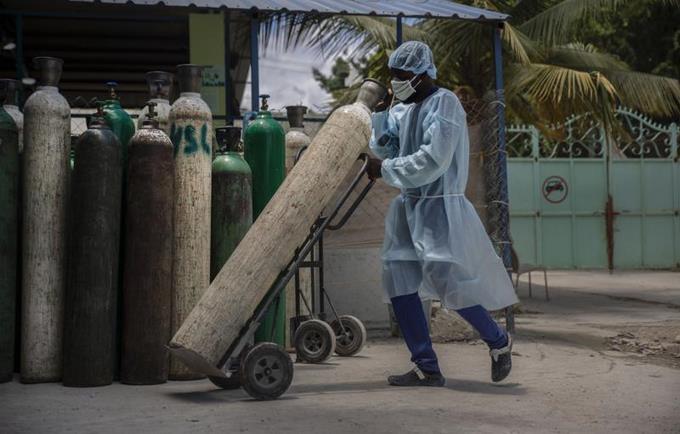 Since the beginning of the pandemic, Haiti had confused experts: relatively low infection and death rates despite its devastated health system, a total absence of vaccines, and an almost total disregard for preventive measures such as masks and social distancing. .

The few Haitian hospitals treating COVID-19 cases have been so overwhelmed in recent days that they are turning away patients, while plans to open another hospital to treat those infected have been postponed.

Official figures remain relatively low for a country of more than 11 million people: just 2,271 cases and 62 deaths have been recorded in the last month in government data collected by Johns Hopkins University. A total of 15,700 cases and more than 330 deaths have been reported since the beginning of last year.

But experts agree that these figures do not reflect the true scale of what they say is the largest increase in cases since the virus arrived in the Caribbean country.

The government declared a health emergency on May 24 and imposed a curfew and other preventive measures, although few Haitians appear to be respecting them. Most avoid wearing masks – or cannot afford them – and it is almost impossible to keep a distance when shopping in crowded markets or when riding the buses that most Haitians use for transportation.

“There is no time to lose,” said Carissa Etienne, director of the Pan American Health Organization, which is working with the government to increase testing to identify and isolate infected: a difficult task in a place where few believe they can afford of getting sick.

Sanorah Valcourt, a 27-year-old mother and hairdresser, said she felt unwell for two weeks last month, with a fever and symptoms such as loss of sense of taste, but did not undergo tests or take steps such as wearing masks, which she finds it uncomfortable.

“I didn’t feel well enough to get on a bus and spend hours in a hospital for a test,” he said.

The lack of cases earlier this year had led authorities to reduce the number of beds allocated to COVID cases to about 200, more than half of them at the St. Luke Foundation in Port-au-Prince.

But this month that clinic was full and announced that it was turning away patients.

“Many people are dying arriving in ambulances,” the foundation said. “We have received many nuns as patients, a clear indication that COVID-19 is in the poorest areas.”

Marc Edson Augustin, medical director of St. Luke’s Hospital, said he is particularly concerned about the deaths he has seen among patients between the ages of 17 and 22 and that groups of up to seven people are arriving at the same time seeking treatment.

“The situation is real and we want to tell people that the situation is getting worse,” he said. “We are working to keep people alive as much as possible.”

The Health Ministry had planned to open another 150 beds elsewhere for COVID patients, but that effort was postponed. Meanwhile, Bruno Maes, UNICEF representative in Haiti, said the children’s agency works to help hospitals get oxygen and fuel.

“It is certainly not enough,” he said. “We have to be ready for a greater influx of cases … The situation could spiral out of control.”

So far, Haiti has not received a single vaccine, although authorities say they expect to receive 130,000 doses of AstraZeneca this month.

The US government said it was donating a portion of six million doses to Haiti, although how many or when they would arrive has not been specified.

Some 756,000 doses of AstraZeneca were due to arrive in May through the COVAX program for poor countries, but the shipment was delayed due to government concerns about the possibility of clots as a rare side effect and a lack of infrastructure to keep vaccines refrigerated.

The Pan American Health Organization said it would help Haiti solve those problems and is prioritizing the vaccination of health workers.

In addition, the medical system has been grappling with other problems, including back wages for some workers. Recently, President Jovenel Moïse asked the Ministry of Economy and Finance to guarantee that they will be paid.

But even when vaccines arrive, experts fear that many will not get vaccinated: some for fear of venturing into dangerous neighborhoods in order to get the shot.

Valcourt cited those dangers as one of the reasons he avoids getting tested. Like many Haitians, she opted for street remedies, in her case an infusion made with parsley, garlic, lemon, thyme, and cloves.

Manoucheka Louis, a 35-year-old street vendor, said she got sick this year but didn’t have the $ 20 needed to see a private doctor, whom she trusts more than public institutions.

“Health care is not something I can afford,” he said. She added that she coughed a lot and had a fever, loss of taste, and headaches and muscle aches. Her two sons had the same symptoms, and they all used homemade teas and regular cold medications.

He says he cannot afford to always wear a mask. They cost the equivalent of 50 cents each, in a country where many people earn a dollar or two a day.