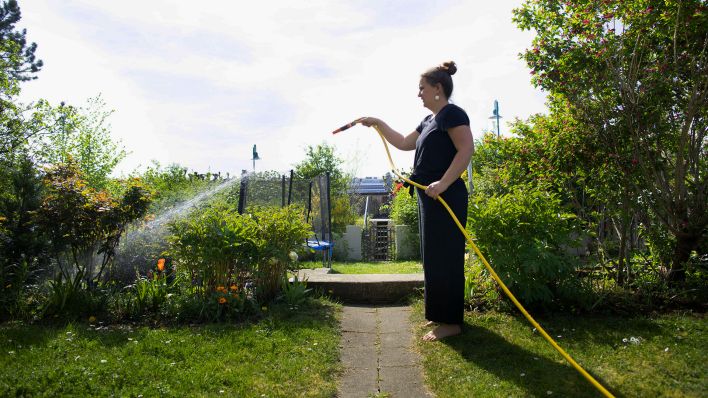 Water Use: Why Lawn Sprinklers and Pool Filling Should Be Limited

Water consumption in Berlin and Brandenburg
–


Lawn sprinkling and pool filling push waterworks to their limits

The water consumption of Berliners and Brandenburgers has increased. This is mainly due to gardens and pools. That has to change, otherwise there will be price increases or bans. On the other hand, trying to save water in the household is of little use. By Anna Bordel

When it gets hotter in Panketal near Bernau in summer, drinking water has regularly become scarce in recent years. Then so many water sprinklers go on that consumption doubles in the summer months, Mayor Maximilian Wonke (SPD) told rbb. At such times, the waterworks can no longer transport the required amount of drinking water. It is not designed for such peak loads. Garden blasting bans this year should help to get the problem under control in very dry and hot times.

The water association Strausberg-Erkner has also started to ration water for private households. According to this, newcomers who lay a new water connection in a newly built house, for example, may only use 105 liters of water per person per day. Water rationing is not yet planned in Berlin, but more water must be saved in the hot months, says Stephan Natz, spokesman for Berliner Wasserbetriebe.

Brandenburgers and Berliners use more water

Brandenburgers and Berliners use more water than they have since 1991. This is the result of figures from the State Office for Statistics, which are collected every three years. According to this, 120.1 liters of water were used per person per day in 2019. In 2016, consumption in Brandenburg was still 111.4 liters.

More water was also used in Berlin, but the increase was less pronounced. At 119.5 liters in 2019, Berlin’s consumption is only two liters higher than in 2016. Brandenburg has overtaken Berlin in terms of water consumption per person for the first time since the early 1990s.

The actual quantity is not the problem, says Natz from the waterworks. It only becomes difficult because there is extremely high consumption in the summer months. “We don’t really have any problems with the general amount of water, we have problems especially in the summer months”.

Saving water in the home depends on technology

In concrete terms, it is lawn sprinkling and pool filling that push the waterworks to their limits. “Berlin has a crazy number of gardens,” says Natz. “And Corona gave it a certain drive: Many people didn’t go away anymore”, instead they would have whipped their garden into shape. One of the common garden pools holds around 14,000 liters of water. “That’s a third of what a Berliner uses in a whole year,” says Natz. You have to ask yourself whether this is necessary, or at least ask: how often? According to the spokesman, however, he cannot imagine a “water sheriff” like the one in California who controls withdrawal quantities.

Wanting to save water in the household, on the other hand, does not have a great effect, says Natz. It is only “possible to a limited extent because it depends on the technology”. And that has now been optimized in terms of water consumption. Of course you can take a shower instead of a bath, or collect water that you used to wash vegetables, for example, and use it to water the flowers – but then we’re talking about a few liters. Nevertheless, says Natz: “Don’t waste water, dear people. There is a lot of work and a lot of energy in water.”

Not only saving is important when dealing with water, as Astrid Hackenesch-Rump, also spokeswoman for the Berliner Wasserbetriebe, said in the rbb. It is also about avoiding trace substances from chemicals and medicines that cannot be easily filtered out in the sewage treatment plants and not disposing of them in the toilet.

Joshua Jahn from the Brandenburg consumer center sees more potential in simple water-saving measures in the household – at least as far as one’s own wallet is concerned. “It makes sense to buy a shower economy head that mixes air with the water, which saves 50 percent of the water, and that saves around 200 euros per household per year,” explains Jahn. If you connect a so-called aerator to every fitting available in the household, which adds air to the water, you can save 10 to 20 percent of water, he says. Garden users should only water in the evening or in the morning and preferably with rainwater.

Nevertheless, the influence that private individuals have on water consumption is rather small compared to what some companies use, says Jahn. “If you look at the Jänschwalde lignite-fired power plant, consumers have little influence there.” The lignite-fired power plant recently had to answer in court for having used almost three times as much groundwater as was actually allowed. Instead of 42 million cubic meters, the plant removed 114 million in 2021. According to Tesla, it consumes 1.4 million cubic meters.

Households use 77 percent of the water in Berlin

The Berlin Green politician Benedikt Lux sees an opportunity here. In his opinion, a tax should be introduced for the abstraction of surface water for commercial use. “It would be good if the basic fees for reasonable water consumption were reduced, but the prices for very high consumption rose significantly,” says Lux.

Lux still finds it sensible that private households are encouraged to save water. According to the Berliner Wasserbetriebe, households in Berlin use 77 percent of the water. Rationing in Berlin is currently not up for debate, but it could be that unnecessary water consumption at peak times – for example at midday for watering the greenery – could become significantly more expensive or even banned, according to Lux.

It remains to be seen to what extent the fact that many Berliners and Brandenburgers will at least not water their own gardens and pools during the holidays, as in the past pandemic years, will affect water consumption this summer.