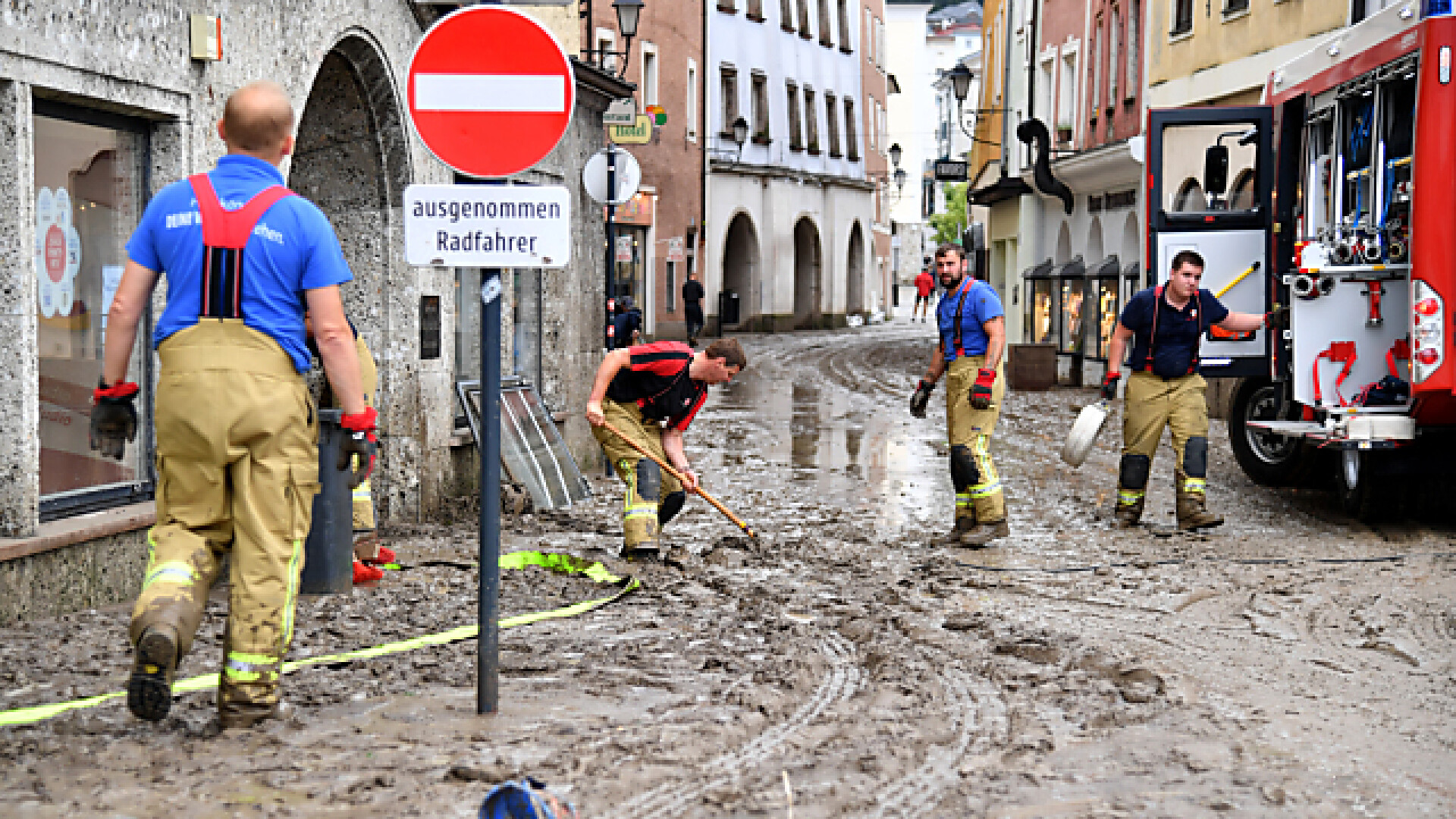 In Hallein in Salzburg, the old town was flooded, and the city center of Kufstein in Tyrol was “under water as we have never seen it before,” reported Mayor Martin Krumschnabel of the APA. In places it rained as much or even more in a few hours than in an average entire July. Nobody was injured for the time being.

After the masses of water from the Kothbach flooded the city of Hallein on Saturday evening, the emergency services and residents were busy cleaning up on Sunday morning. The Kothbach retreated into the stream, but left mud and devastation in the streets of the Celtic city. In the narrow streets, the water was sometimes meters high. Firefighters and volunteers shoveled mud, branches and debris from the entrances to the houses in the affected streets.

“We are clearing the traffic routes, pumping out the basement and we are busy with the clean-up work in Hallein and Bad Dürrnberg,” said the Hallein fire brigade commander and operations manager Josef Tschematschar to the APA. The situation was also tense on Sunday morning. A settlement in the district of Gamp was evacuated because a retaining wall threatened to collapse. 30 people had to leave their homes. The mayor of Hallein, Alexander Stangassinger (SPÖ), called on people not to hinder the clean-up work.

The heavy rain on Sunday also continued to challenge the emergency services in Tyrol. Numerous mudslides, flooded cellars and underground garages were the result of the heavy rainfall. Kufstein was particularly affected, but the civil defense alarm there was lifted in the morning. Especially in the inner city streets, cellars and garages are under water. People were told not to come into town.

The place Kelchsau (Kitzbühel district) was also cut off in the morning because of a mudslide. Several streams were crossed. Because there was a festival in the place in the evening, around 80 people who do not live in the Kelchsau were included. In the course of the morning they were able to be taken out of the village, the police reported.

In Upper Austria there were local floods, mudslides, landslides and full cellars from Saturday afternoon. The mobile flood protection was built due to rising water levels on the Inn and Danube. In Schärding am Inn it was completely set up on Sunday lunchtime, in Grein an der Donau, work was also carried out on it. Civil protection warnings in Schärding and Steyr remained in place.

In Vienna there were “1,200 missions in connection with the heavy rain event” from early Saturday morning to Sunday at 1 p.m., reported fire department spokesman Jürgen Figerl. This mainly concerned pumping out basements, underground garages and underpasses. In the south of the federal capital, the Petersbach and Liesingbach broke their banks in places. According to Wiener Netze, a total of 6,650 households were temporarily affected by power outages. The city has issued a bathing ban in the New Danube.

In Lower Austria, heavy rain had led to numerous fire brigade operations in the Amstetten district. A civil defense alarm was triggered in Ferschnitz and Neuhofen. Both communities are on the Ybbs. According to the state warning center, both places were surrounded by floods, and streams and smaller rivers overflowed their banks. The water level of the Danube reached the flood warning level in the Krems district on Sunday.

In the Krems district, the level of the Danube reached the high water alarm level on Sunday afternoon. In the morning, the level at the Kienstock measuring point was 750 centimeters according to the water level news from the state of Lower Austria. The warning level had already been reached in the morning. Despite the alert level, there is currently no danger to the population on the Danube, the Krems fire brigade announced on its website.

Vorarlberg was largely spared the consequences of the heavy rainfall. In Dornbirn, a stream overflowed its banks due to blockages and a row of houses was flooded. In the residential complexes, cellars and underground garages had to be pumped out. Compared to the northern Alps, the rainfall in Upper Styria remained moderate – due to heavy rain, the fire brigades only had to cope with around 16 missions in the districts of Liezen and Bruck-Mürzzuschlag. According to the State Fire Brigade Association, brooks overflowed their banks, cellars were flooded and streets had to be cleared.

The rain front had stuck to the Alps from the north and caused extremely large amounts of precipitation, especially there. In places it rained as much or even more in a few hours than in an average entire July, the Central Institute for Meteorology and Geodynamics (ZAMG) told the APA. Heavy rain showers are still possible in places on Sunday well into the evening. From Monday the weather will be much calmer. Only a few showers are to be expected. Large-scale heavy rain is not in sight in the coming week, according to ZAMG.

Federal Chancellor Sebastian Kurz (ÖVP) and Vice Chancellor Werner Kogler (Greens) promised the victims of the flood help from the disaster fund. “The pictures from parts of Austria and especially from Hallein or the Tiroler Unterland make you shocked and shocked. As the federal government, we will do everything in our power to help those affected”, Kurz said in a statement to the APA. “The storms have already caused major damage and we as the federal government will work together with the federal states to support the affected communities and damaged households in rebuilding,” emphasized Kogler.

The Ministry of the Interior, meanwhile, offered the air police’s 18 helicopters for disaster operations in the areas affected by the flood. The helicopters could be used for transport flights as well as for reconnaissance flights and, if necessary, also for evacuating people. “The situation once again requires the cooperation of all blue light organizations. This partnership has often been practiced and has already been practiced many times,” said Interior Minister Karl Nehammer (ÖVP) in a further statement to the APA.

SPÖ federal party chairman Pamela Rendi-Wagner also thanked the numerous emergency services for their commitment: “The organizations, be it the fire brigade, the armed forces, rescue and disaster protection organizations, but above all the many volunteers, such as the volunteer fire brigade, do – partly at the risk of their lives – indispensable work. You always deserve our special thanks, but especially on days like these! “, says Rendi-Wagner.