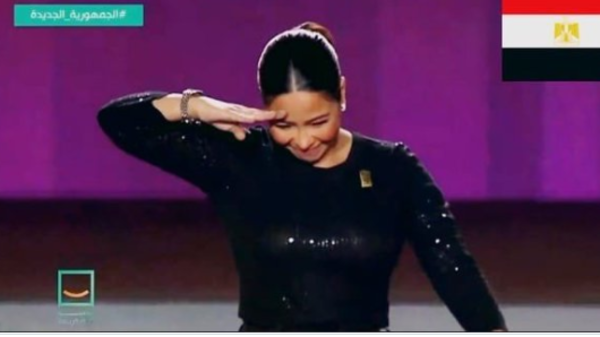 In an unusual scene, the Egyptian artist, Sherine Abdel Wahab, gave the military salute to Egyptian President Abdel Fattah El-Sisi, during the first conference of the national project for the development of Egyptian rural villages.

The artist, Sherine, performed the song “Masr Always” during the initiative’s first conference, which was held at Cairo International Stadium.

Prime Minister Mostafa Madbouly and thousands of citizens representing different sects of the Egyptian people, a number of public figures, media professionals, businessmen and representatives of Egyptian, regional and international institutions participated in the celebration.

A great interaction witnessed by Sherine’s song and her participation in the conference, especially since it is her first appearance after her crisis with her husband, Hossam Habib, with the latter’s father because of the leaked recording.

However, Sherine’s appearance and her performance of the military salute, caused a great celebration on social networks, and welcomed her appearance again.

For her part, Sherine published a picture of her performing the military salute to the Egyptian president, through her official account on “Twitter”, and commented on her by sending a message to the president.

Sherine said in her letter: “I am honored to have sung in front of you and participated in a great event, God willing, for the first time, that will relieve millions of our people’s suffering and lead them to a decent life they deserve.”

Sherine continued her speech and her message to the Egyptian president, saying: “May God protect you and protect you for Egypt and for us.. He mentioned you to our Lord in your speeches, one of the most beautiful and most precious things I hear.. and the most reassuring thing for my country.

A large number of Sherine’s fans considered that her standing and singing in front of the Egyptian President is a restitution for her because of what was said about her and her husband during the past weeks, and made her go out to cry publicly and ask everyone to let her live in peace.