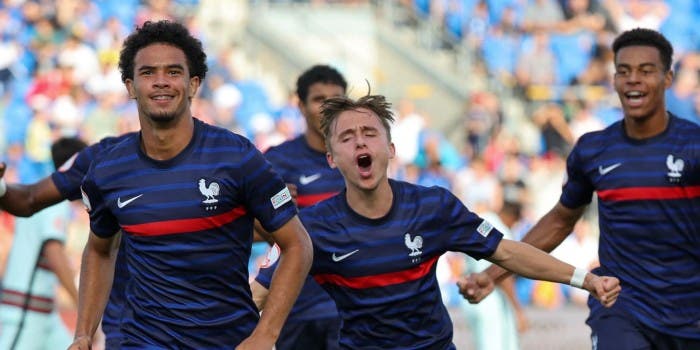 Several PSG players are not yet on vacation. They are currently with their respective national teams to participate in several friendly matches, as part of the League of Nations or even qualifying for the African Cup of Nations (CAN) 2023. Two Parisian titis are currently playing the Euro U17 with the French team, El Chadaille Bitshiabu and Warren Zaire-Emery.

Another magnificent goal for Zaire-Emery

Here, the two youngsters from PSG started in the semi-final of the competition against Portugal. Zaire-Emery will not take long to stand out in this meeting. From the eighth minute, he fired a magnificent shot from 30 meters to deceive the Portuguese goalkeeper and put France in front (1-0, 8th). But this lead will be short-lived as Portugal will manage to equalize four minutes later (1-1, 12th) through Moreira before seeing Essugo send a mine from 40 meters to allow the Lusitanians to turn in the lead in this semi-final (1-2, 20th). A last goal will be scored in this first period, for France. Just before the break, Muniz will drive the ball into his own net to put the two teams level (2-2, 45th+1). The second half will not allow France and Portugal to decide. It’s the penalty shootout, like in the quarter-finals against Germany, who will decide the finalist. And in this exercise, it is the French who win (6-5). Les Bleuets will face the Netherlands Wednesday (6 p.m.) – who eliminated Serbia equal on penalties (2-2, 5 pens to 3) – to try to win the Euro U17 for the third time in the history of France. The two PSG players played the entire match.