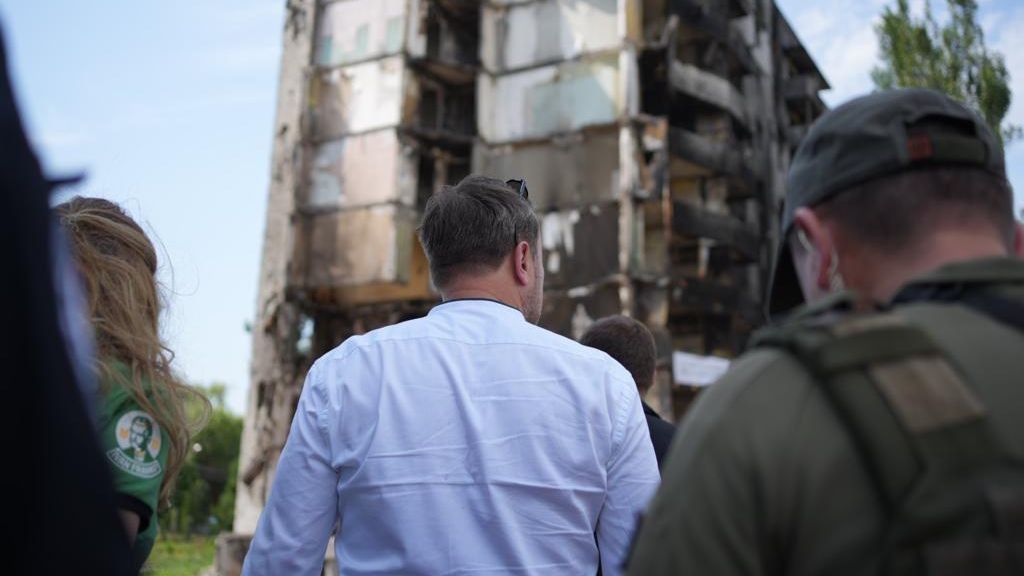 War in Ukraine: Xavier Bettel in the martyred city of Boutcha

LUXEMBOURG – Luxembourg Prime Minister Xavier Bettel is currently in Ukraine for a diplomatic and political visit, the government said on Tuesday. A visit that has a high symbolic value.

Luxembourg Prime Minister Xavier Bettel is currently traveling to Ukraine, the government said in a statement sent on Tuesday. For obvious security reasons, very few details were provided on the agenda of the head of government on the spot. Xavier Bettel was first greeted in kyiv when he got off the train by Emine Dzhaparova, Ukraine’s first deputy foreign minister.

The Prime Minister then went to the town of Borodyanka, northwest of kyiv. The head of government circulated in this city scarred by the war, between buildings in ruins and went to meet the population. “Borodyanka suffered to the point of being totally destroyed by Russian aggression and is today a symbol of senseless cruelty and violence. Nothing can express the horror of what happened here,” he said.

The Prime Minister in Boutcha, a martyred city

He then went to Boutcha, the scene of a massacre of civilians. The discovery of a mass grave had generated strong emotion and a series of condemnations from the international community. At least 412 people lost their lives there between the end of February and the beginning of March after the passage of the Russian army.

“There are no words to describe Boutcha’s unimaginable human tragedy. You can count on Luxembourg to support the investigations of national and international actors into these war crimes, and to ensure that those responsible for these atrocities are identified, tried and punished”, commented the Prime Minister.

In addition to this trip to the cities affected by Russian aggression, Xavier Bettel was to take part in a series of “bilateral political interviews”. This diplomatic and political visit follows the invitation of Ukrainian President Volodymyr Zelensky during his video speech to the Chamber of Deputies on June 2.

“I will go to Ukraine”, replied Mr Bettel, after this emotional speech, during which the Ukrainian President took over, on behalf of his country, the Luxembourg motto: “We want to remain what we are (Mir wëlle bleiwe wat mir sinn). The promise of the Luxembourg Prime Minister came to fruition more quickly than expected, while the prospect of seeing Ukraine join the European Union also accelerated. “I always said that I would not invite myself to Ukraine. But if the Ukrainian authorities invite me to come, I will not refuse,” said Xavier Bettel.

The Grand Duchy has supported Ukraine in various ways since the start of the war. Military and medical equipment has already been delivered for more than 50 million euros. In addition, some 5,500 Ukrainians have already been received in Luxembourg.

In the footsteps of Macron and Scholz

Several Western leaders have already visited kyiv since the start of the war, such as Ursula van der Leyen (European Commission), Boris Johnson (United Kingdom), Justin Trudeau (Canada) or Antonio Costa (Portugal). Last Thursday, the French President, Emmanuel Macron, the Italian President of the Council, Mario Draghi, and the German Chancellor, Olaf Scholz, went to kyiv, in particular to announce their wish to grant “immediately” to Ukraine, the status of candidate for membership of the European Union.

Luxembourg “will not oppose a candidacy”, indicated the Prime Minister, specifying however that there was no “accelerated procedure”.