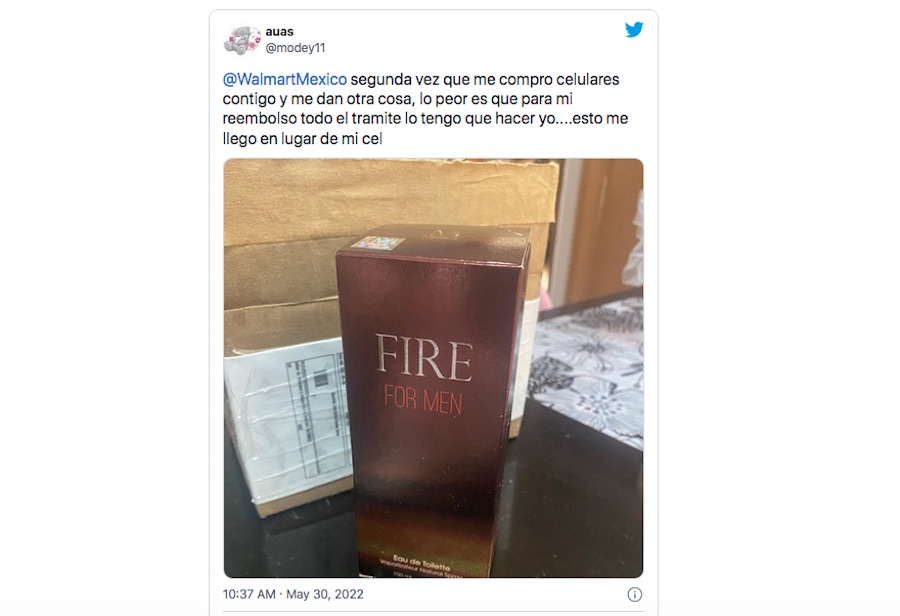 “Fire for Men” is the cheap perfume that a client of Walmart Mexico received instead of his smartphone and the complaint he made on social networks shows a bad practice that escalates in online purchases.

According to @modey11, this is the second time you have purchased a smartphone at Walmart and received a totally different product from your original order. This time it was a perfume cheap that on sites like Amazon is priced at $15 and is described as a fragrance that “you’ll be on fire with. The elegant bottle contains the most seductive aroma that will make you feel sexy and powerful”.

@WalmartMexico second time I buy cell phones from you and they give me something else, the worst thing is that for my refund I have to do all the paperwork….this came to me instead of my cell pic.twitter.com/6RDPM0NT1b

The consumer as a victim

The consumer as a victim seems to be a profile that follows and continues to resent bad practices within electronic commerce.where without a doubt a unique reference has been established and it is the one that has to do with the machination of increasingly audacious strategies in the market where stores such as Walmart suffer from these bad practices.

The consumer, resenting bad delivery practices for online purchases, has made social networks his best means of reportingbecause they scale in these channels in an important way.

There is no doubt that they have been able to maintain tasks that have understood one aspect in a very clear way and that is to be able to establish better consumption practices before which it is necessary to understand what to do and what not to take advantage of in these media, otherwise it will not be manages to assume a clear exercise of identifying goals to meet with the consumer.

And perfume cheap known as “Fire for men” and that on platforms like Amazon is described as “the most seductive aroma that will make you feel sexy and powerful”, is what is sold.

Time to take the next step

There is a new step that seems obligatory for brands in the e-commerce scenario in which a very interesting exercise has been patented and that has to do with the opportunity that brands have achievedto understand the consumer, not only from their consumption profile, but now from the profile of the victim of bad practices that have been established in electronic commerce, which means an urgent call to be able to renew the strategies that are established in the market.