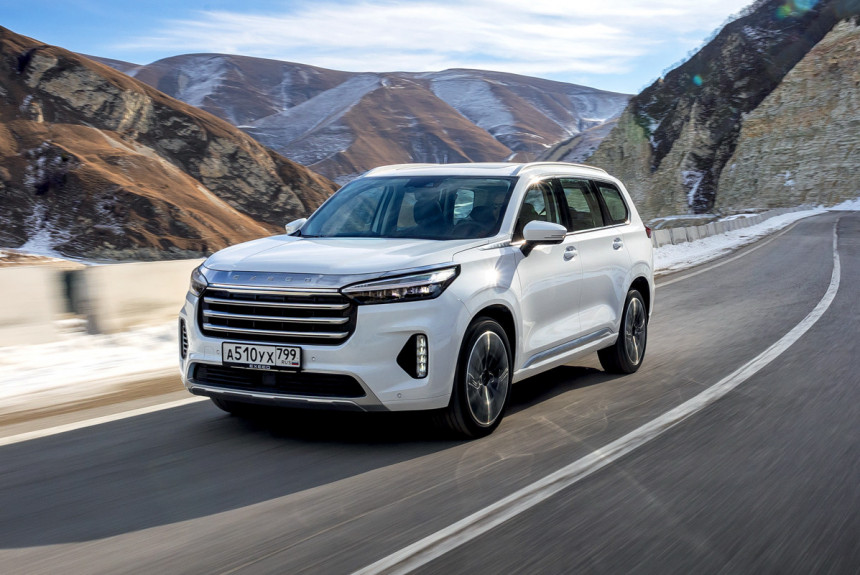 VX, but not the one – Auto Review

Moscow, 2000. In the heading “Trying on ourselves” the editorial staff of Auto Review drives a Toyota Land Cruiser 100 VX SUV for 76 thousand conventional units forgotten today. Then – a little less than two million rubles.

Grozny, 2021. I am driving the Exeed VX crossover, which, apart from two letters, has in common with that “weaving” except for the ability to take seven people at once. The price is at least 3.3 million rubles. Inflation? Not only her.

Ngood VX outside. Nice, modern – hardly noticeably worse than the comparable in size Hyundai Palisade and Mazda CX-9, which, when actually purchased, will turn out to be much more expensive. After all, even the top Exeed VX with the bold name President costs 3.6 million rubles. By the way, the main difference between the President is the complex of active security systems, but all the coincidences here, of course, are accidental.

The front panel is lined with joints and seams – sloppy. The big tablet goes blind in the bright sun, and there are bubbles on the new seats. A car can hide behind the massive base of the pillar at an intersection. But there is no smell in the cabin even in the sun

The VX is assembled well – the gaps are slightly larger than those of European cars, but are quite comparable to Japanese ones. Keyless access, and the fifth door rises by itself if you stand next to it with a key fob in your pocket. It rises, however, a little low, and I have to bend down.

In the five-seater version of the cabin, the trunk is large and with a small underground, in which … Oh, a sheet is clearly not glued to the factory noise and vibration isolation. Hmm, the last car specially prepared for a journalistic test drive in my memory was a UAZ Patriot with chip tuning.

However, not all of the Ixids had traces of pre-test preparation. And I traveled on different ones. And for good reason. The spread in driving properties turned out to be such that the Lada could envy.

But Exeed is not a homemade product, but a top brand of a large company Chery. The M3X modular platform, on which the more compact TXL and the almost five-meter VX are built, was helped by the engineering company Benteler – the same Austrians, for example, set up the production of front and rear suspension modules for the BMW Brilliance joint venture. AVL, which traditionally cooperates with Chery on engines of the Acteco family, is also from Austria – under the hood of the VX is a two-liter gasoline turbo engine, the power of which for the Russian market has been reduced from 256 hp. up to 249 forces. The seven-speed “robot” Getrag 7DCT300 with a pair of wet clutches can be found on BMW, Renault or Mercedes cars. Rear wheel drive multi-plate clutch – Borg Warner. Chief Engineer Peter Matkin spent more than thirty years at Jaguar.

See also  Audi A4 2021: Profeco and Volkswagen call for review due to failure in rear axle alignment 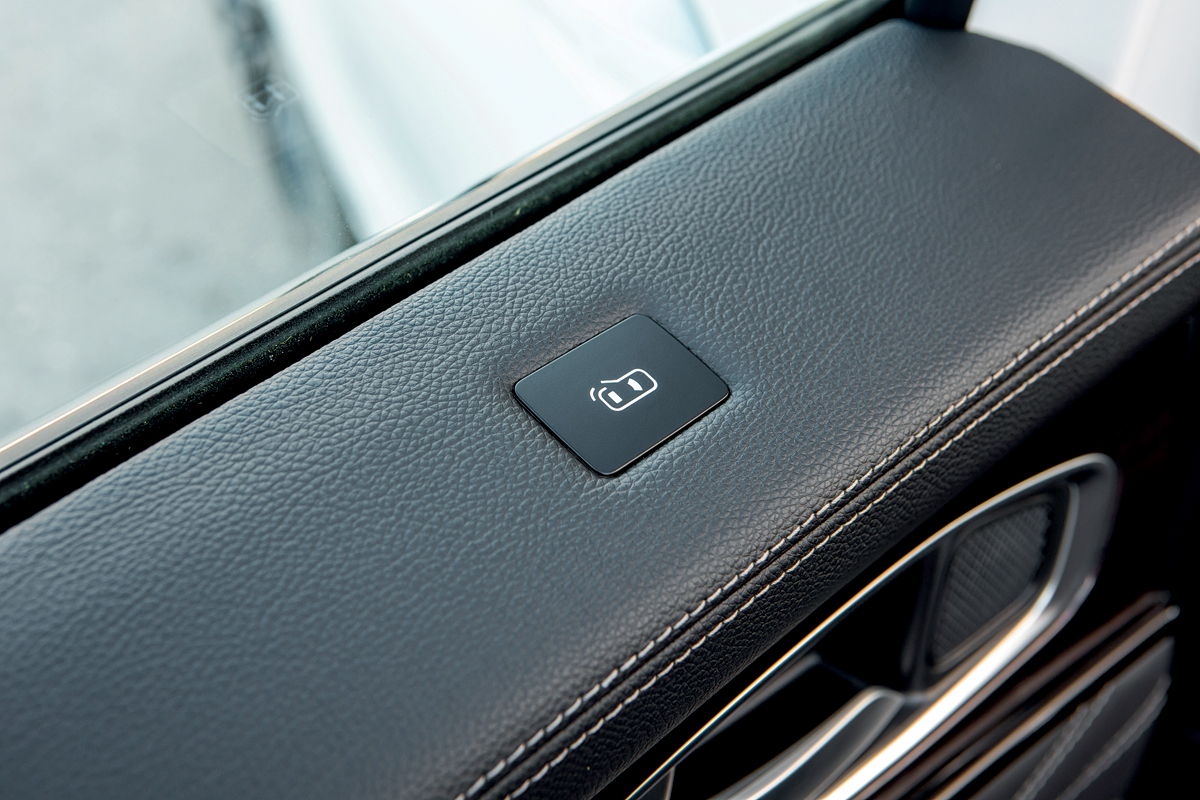 A cool detail – the indicator of the approach of a passing vehicle on the rear doors. So there is less chance of opening the “gate” into someone else’s wing or going out under the wheels

There is indeed something Jaguar about Xid – ​​the climate control unit, which almost exactly copies the element from the F-Pace crossover. The geometry of the fit is thought out, the back in a good chair does not get tired after a whole day. But hand-drawn instruments and control of secondary electronics do not give high marks for ergonomics. Each of the three scale covers has its drawbacks, the screen fades in the sun, there is no RDS system, and the names of radio stations remain mysteries. In the menu, the average speed and consumption, front and rear rows of climate control are reversed. Which, by the way, was never able to cope with the fogged up rear windows in the rain, and in dry weather forced to turn the temperature control every now and then.

Probably a lot of this can be fixed with firmware. And the suspension?

The first of the Ixids I tested turned out to be very tough on sharp irregularities, but at the same time loosened on the waves. Shock bingo! Here’s a blow from a speed bump for you, a buyer, and here’s the swing and rolls to finally get you down. At the same time, the responses to the steering wheel are lazy, there is a craving for the demolition of the front end – and in general, extremely apathetic behavior.

But the second VX pleasantly surprised me with a good balance of ride and handling. A solid suspension coped with both the primer and the joints, and at the entrance to the turn there was a pleasant tightening of the rear multi-link. 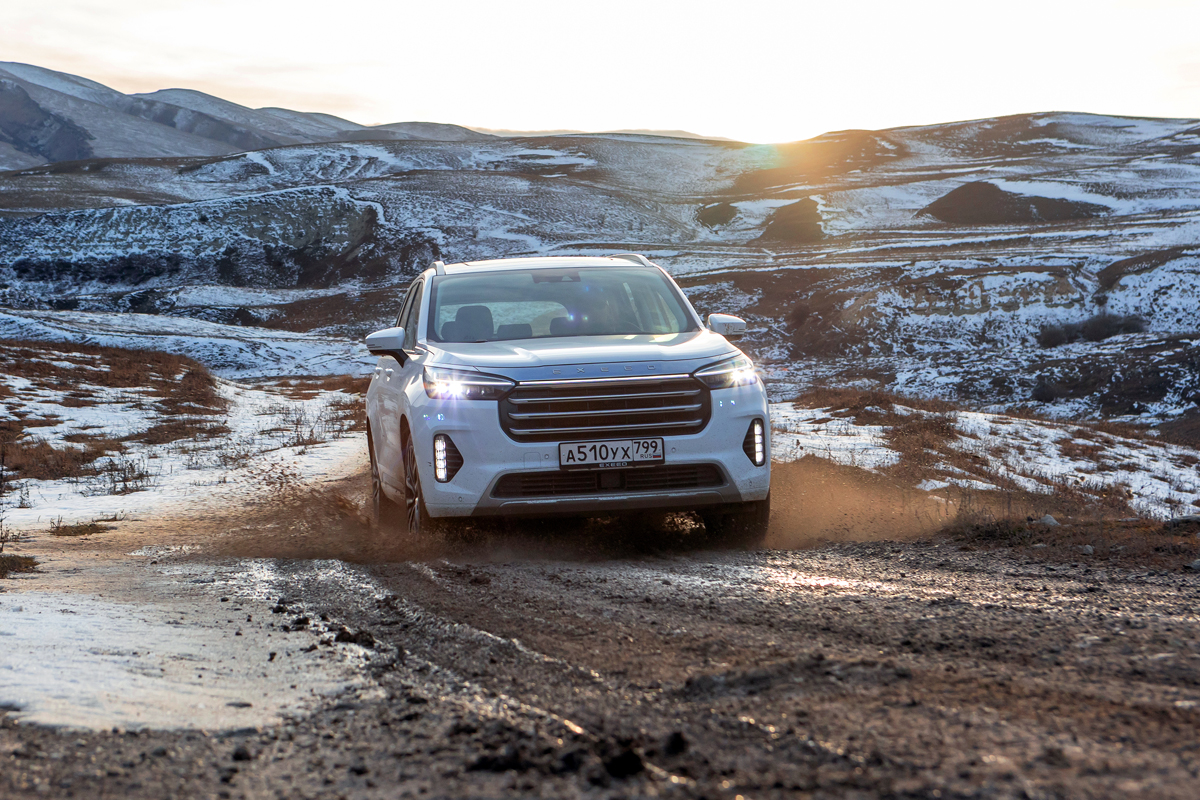 However, I take the third car – and, alas, I immediately notice the already familiar shaking and swinging. I manage to ride on the fourth – also not so hot. So that second one was an exception to the rule? 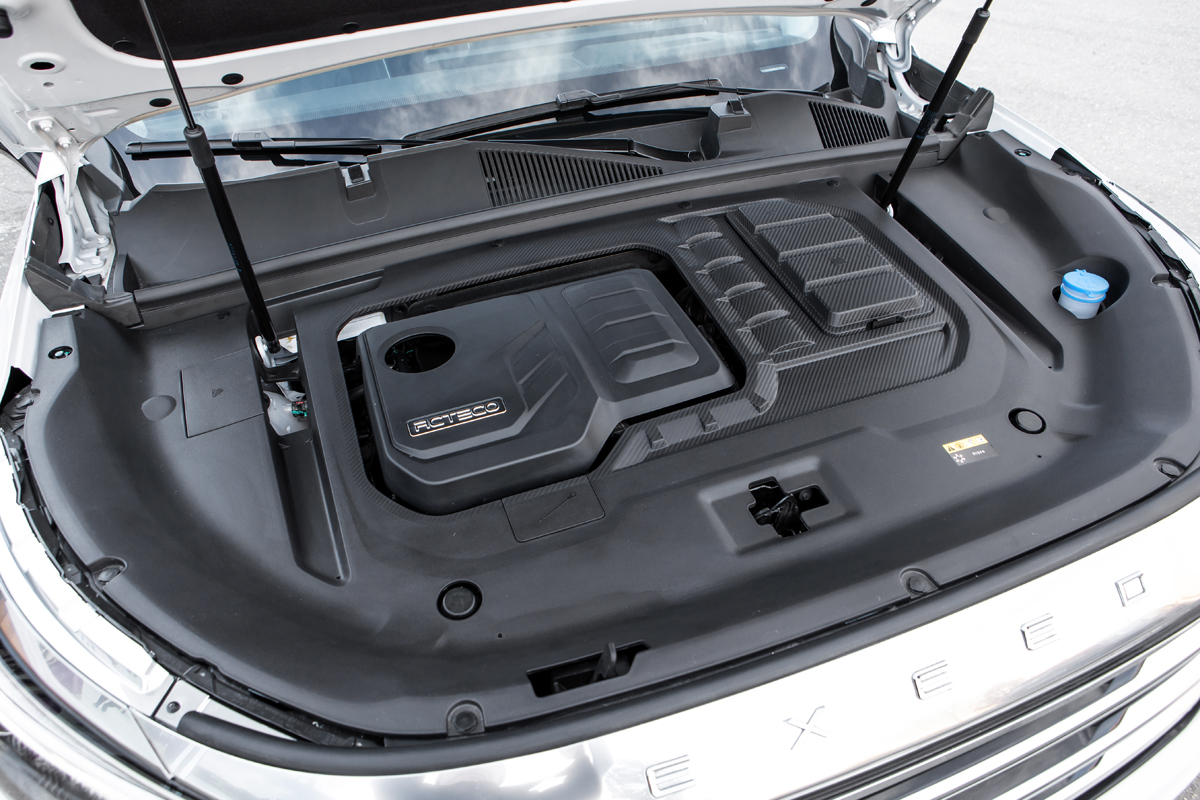 Only the mouth of the washer reservoir at the left fender is exposed. Everything else is covered with plastic shields. At the same time, the motor retains the traditional oil dipstick

By the way, even the power unit worked more pleasantly for him. And for the other three V-Xs, the odd-numbered clutch disks are rough, which makes the start abrupt. In motion, the “robot” quickly climbs upward, forcing the motor to strain at low revs. In the mountains, you want more traction – the sport mode helps, but it’s even better in manual mode. If you keep the engine in the range of four thousand rpm, then you already believe in its 249 hp. By the way, rough measurements of the dynamics showed 9.2 s to “hundreds”. So with a pedal in the floor, the VX is not bad, but in the city traffic, the power unit lacks logic and agility. 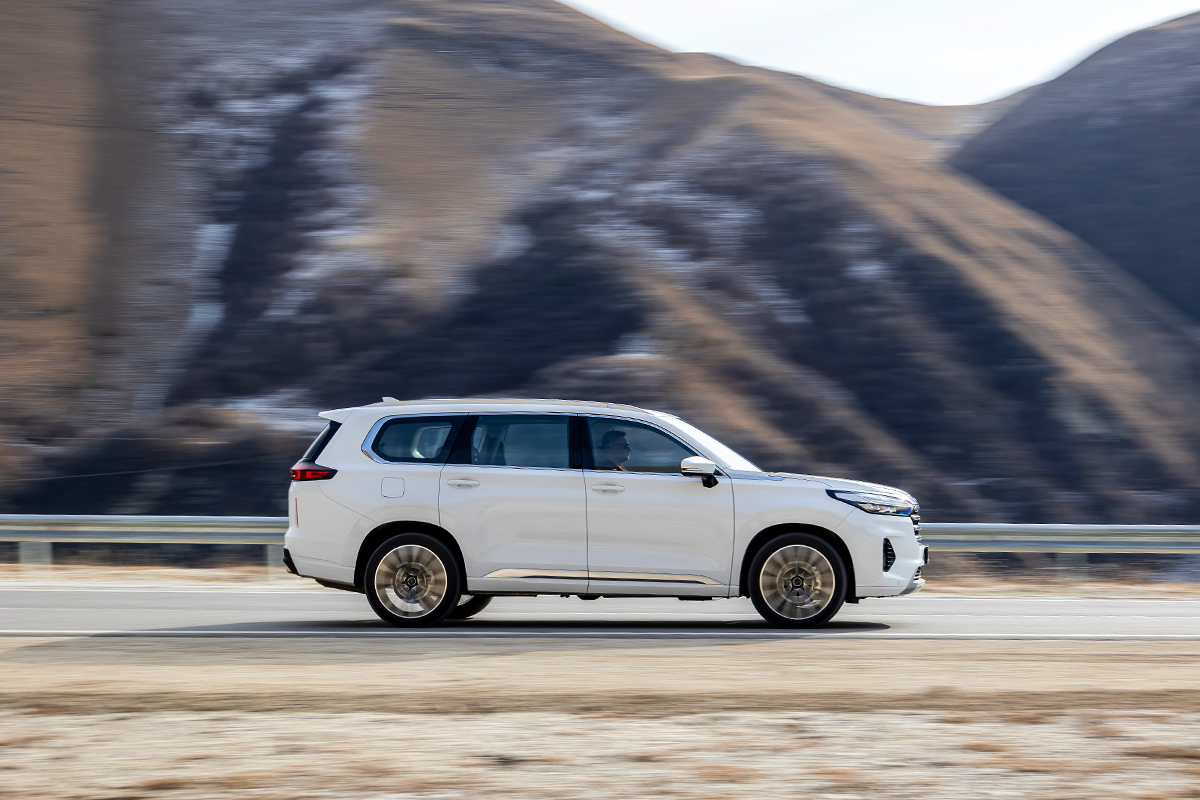 But what is the same for all crossovers is an unpleasant synthetic effort on the steering wheel, and the sports program finally erases all traces of information content.

It is incorrect to assess the handling on the Michelin X-Ice Snow soft winter tires, but I did not find any dangerous habits – I would only like higher stability on a straight line: the VX walks if the surface is ruts or irregularities. And as for laziness in the corners, it generally corresponds to the class of the car. The main thing is that the stabilization system at the beginning of sliding works efficiently and quickly dampens speed. 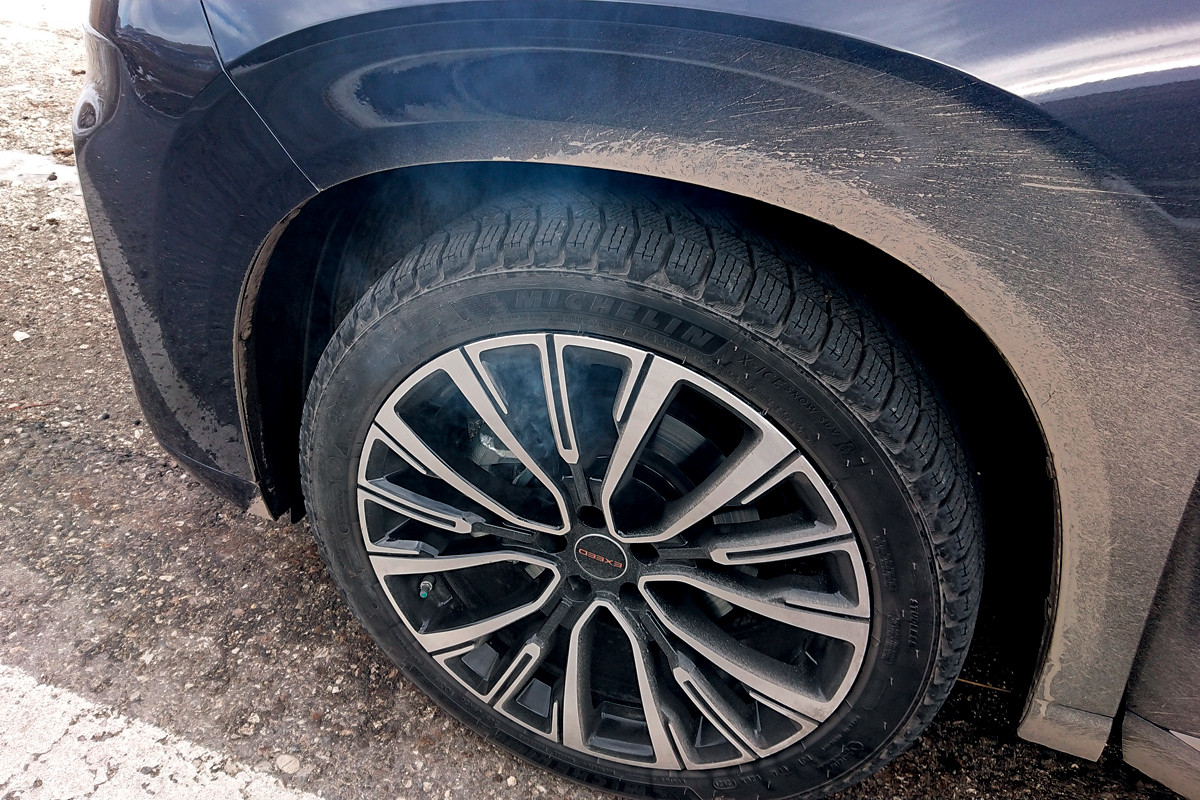 Cotton pedal, low deceleration and smoke from the pads – the composition of the compound or the part supplier needs to be changed

Alas, the brakes are sorely lacking in thermal resistance. We are already accustomed to the fact that the pads of Korean cars begin to smoke on measurements, but here it all started even before the serious loads. I just drove along the serpentine towards Lake Kazenoy-Am, noting that the brakes were getting dull. He stopped on the side of the road – and acrid smoke ran over the wings. But I didn’t anneal – I just drove.

There is no safety margin. Both the brakes and the four-wheel drive transmission.

Firstly, imitations of inter-wheel locks work very sluggishly and leaving the diagonal hanging is not always successful. Chinese journalists have already carried out a test on rollers – and Exeed VX was unable to move off them when only one rear wheel was left on the asphalt. 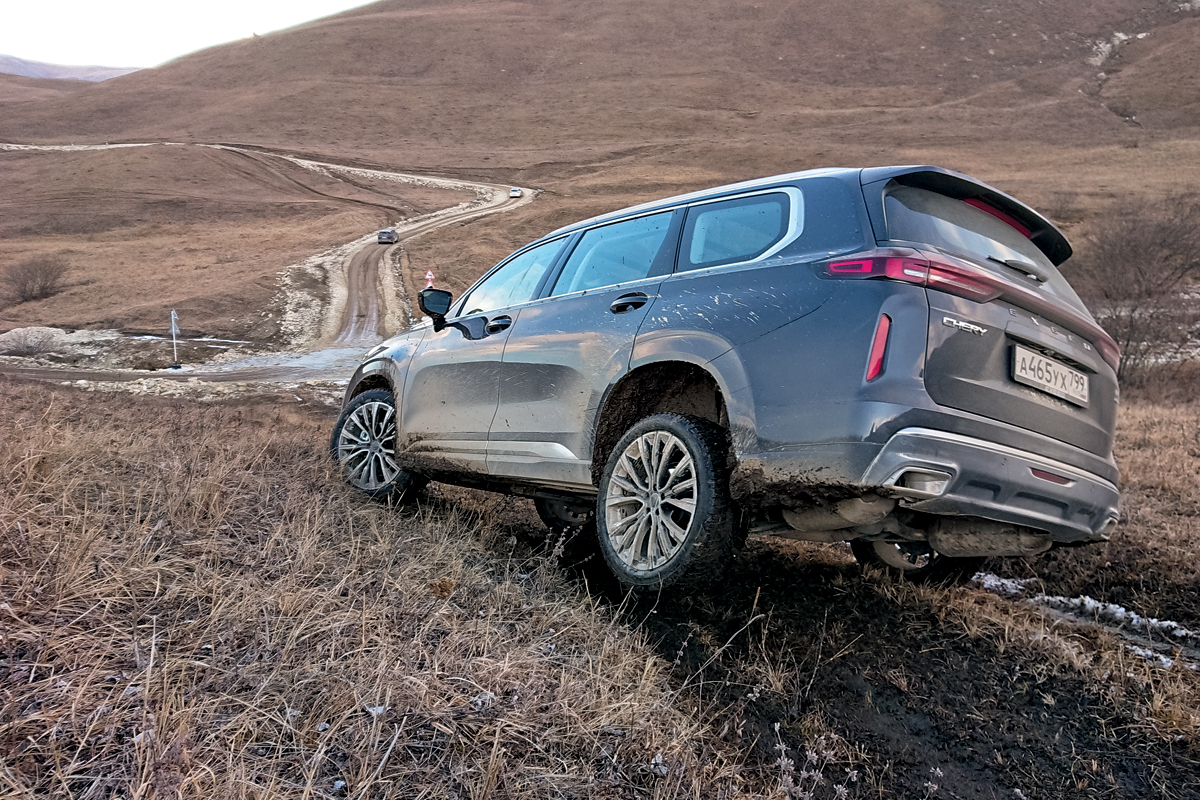 The diagonal post comes early and is difficult for VX to handle. But the torsional rigidity of the body is not bad – in this position, the servo drive closes the trunk without any problems

Secondly, the Borg Warner clutch works well at first, instantly sending torque to the rear wheels and allowing them to slip, but after twenty seconds the four-wheel drive stops. At first, there is an acute shortage of traction, and then the rear-wheel drive is disengaged. It takes a minute to reset the clutch, but now this is no longer accepted. 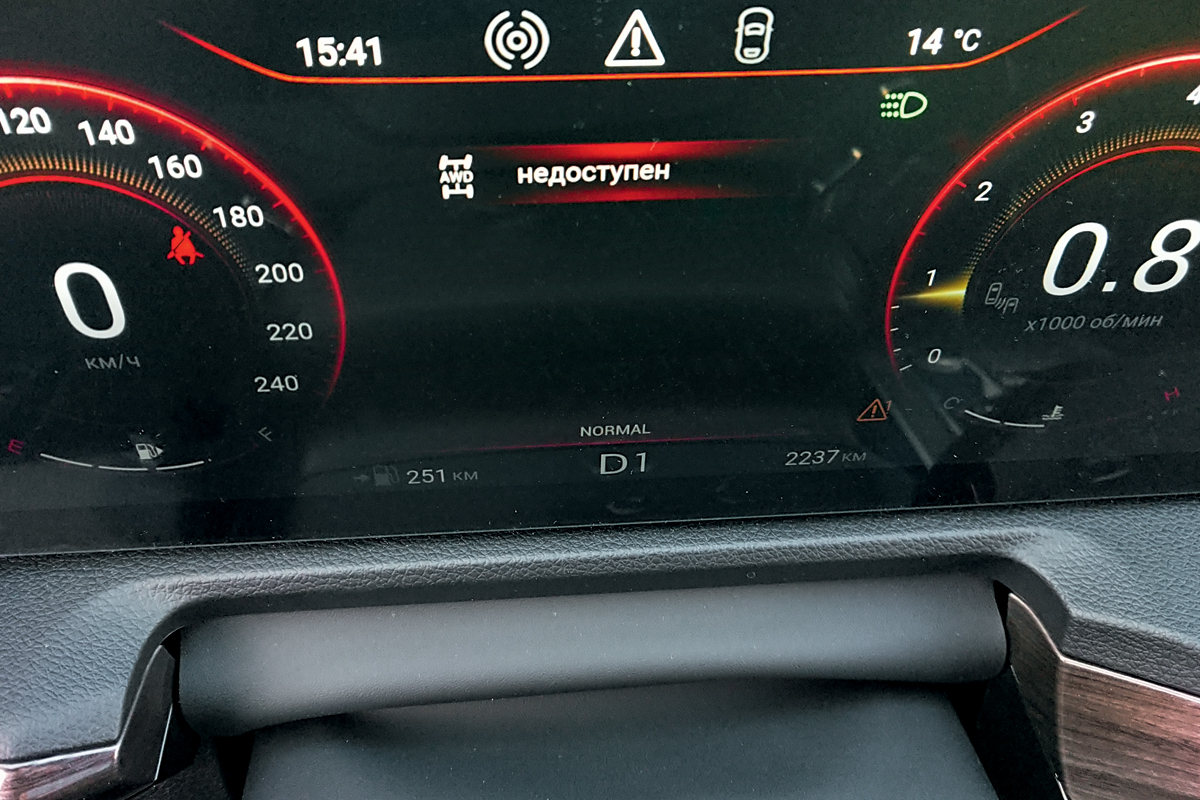 The transmission does not like prolonged slipping: Exeed becomes front-wheel drive and hangs a white flag on the dashboard

Honestly, I would advise buying another VX – the one I own, called the Toyota Land Cruiser 100. Which for twenty years has not ceased to be spacious, comfortable and truly off-road. But go find a “live” used car … 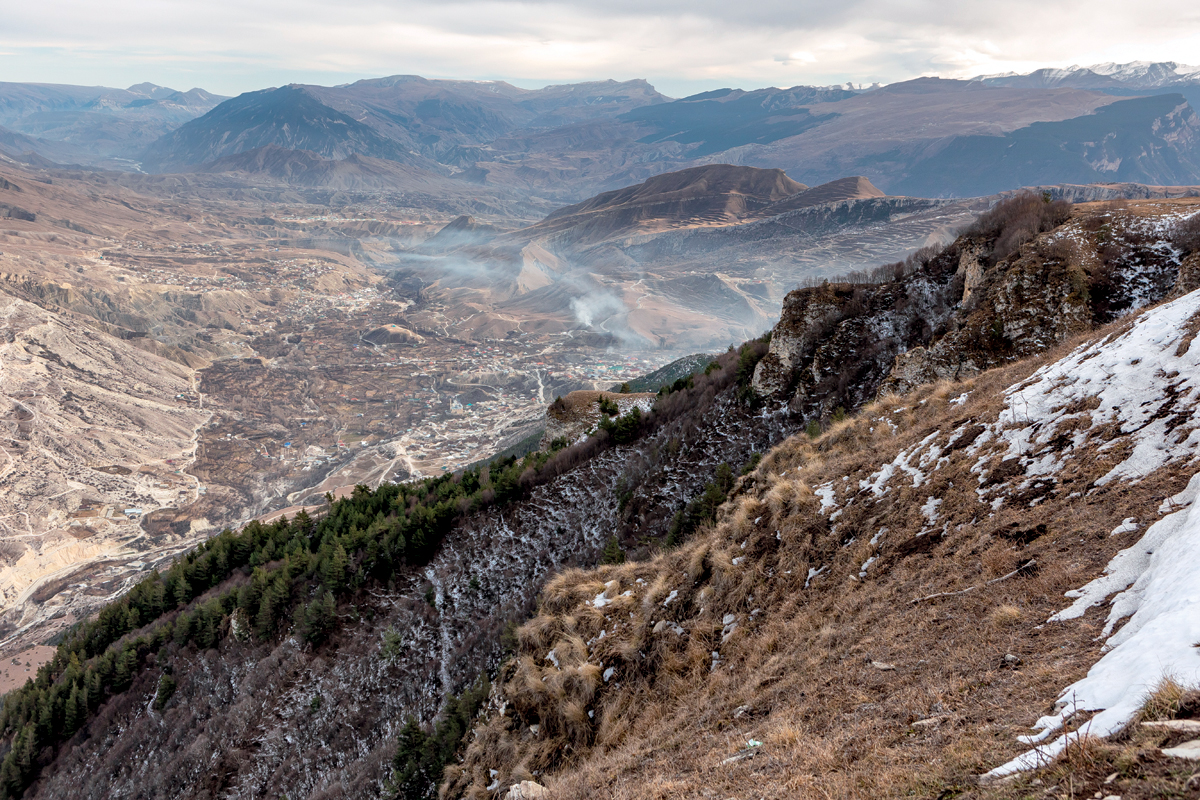 And as for the new ones, if you work on the bugs, Exeed VX can be a good option. After all, it has a really spacious interior, good equipment, 18 centimeters of ground clearance and decent sound insulation – with the exception of the engine that wails at acceleration (oh, the absorbing mats were glued to the wrong place). However, so far all this does not add up to me in a puzzle for three and a half million rubles.

I would change the algorithm of the all-wheel drive clutch and the characteristics of the electric power steering, make the suspension of all crossovers the same – and successful -, change the program of the “robot”, select other brake pads. We are looking forward to working on bugs. And, as always, we are ready to help. 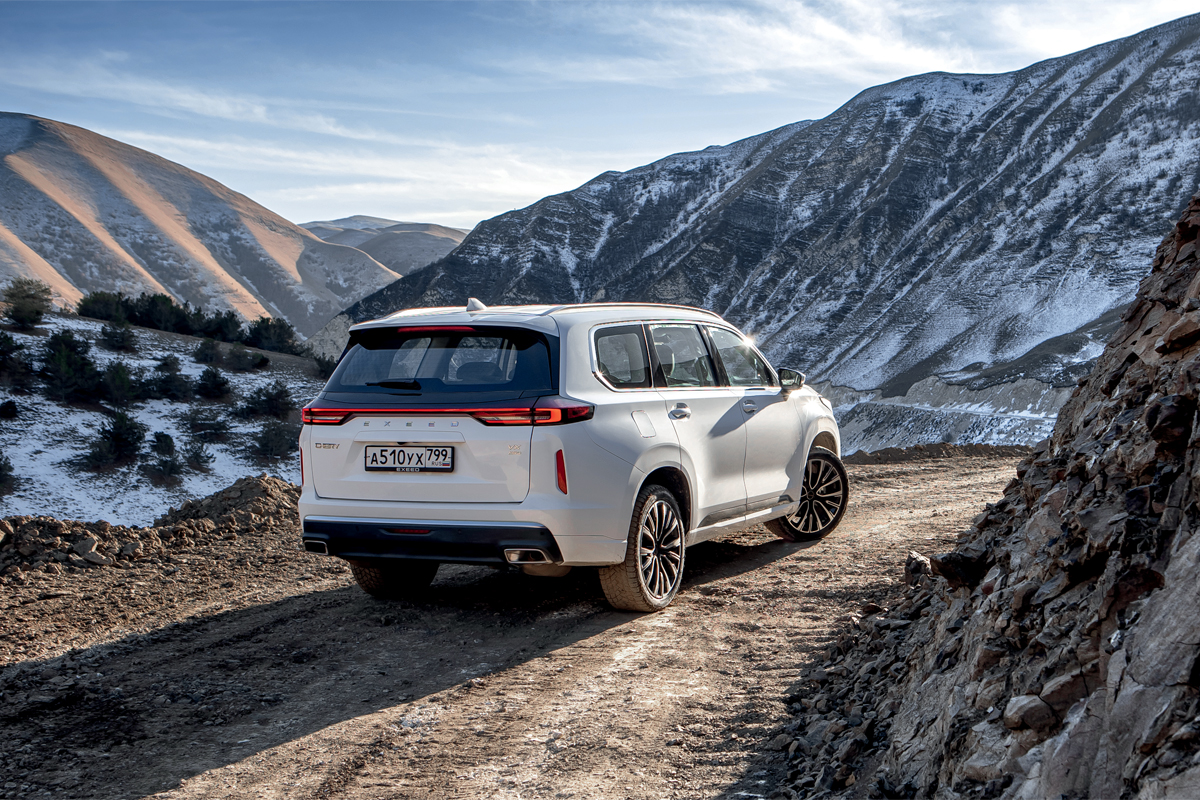