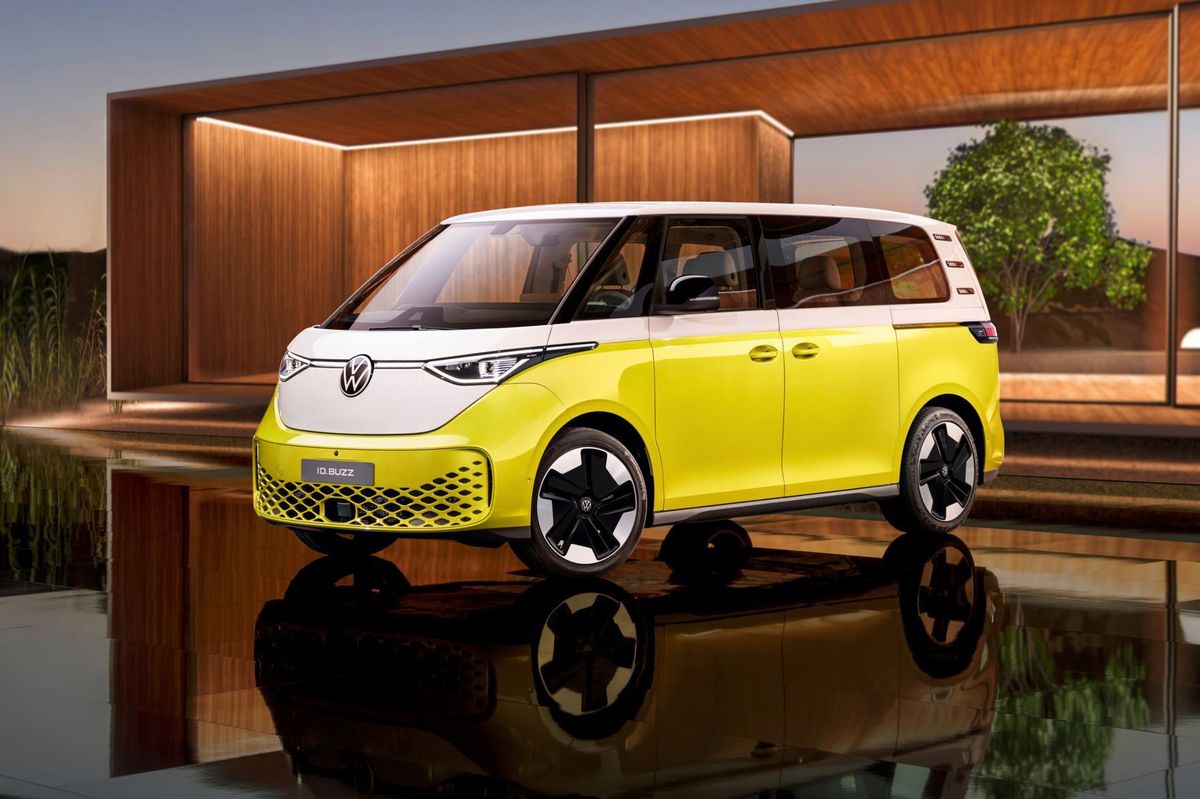 VW ID.BUZZ – This is what the VW Bus of the electric era looks like

After a recent announcement and a long wait, the 100% electric variant of the Volkswagen Bus is finally hitting the market.

Along with the Beetle, the VW Combi is the great bearer of sympathy in the history of the brand’s models. Today, the Wolfsburg manufacturer is bringing it back to life, in its electric version. With the retro-futuristic ID.Buzz in the style of the classic Transporter T1, Volkswagen plans to integrate a predestined sympathy bearer into its program at the end of the year. Initially, only one propulsion variant will be available, but in passenger car and van versions.

Visually, the five-seater vehicle is not very far from the concept unveiled in 2017. Fortunately, the production version has retained the strong borrowings from the legendary original Bulli T1, in particular its pleasant face at the front or even the doors -very short front and rear overhangs. The two-tone paint and the huge brand logo are also reminiscent of the old hippie van. With the Buzz Cargo and its van body, Volkswagen offers a slightly more sober version than the canary yellow one. Both 4.71 meters in length, both versions are more maneuverable than their traditionally-powered cousin, the popular T6 in our country.

The cockpit follows the same style, sober and modern, that we know from the other ID models. For the first time, the layout is entirely vegan, with seats in synthetic material rather than leather; fabrics and rugs are made from recycled materials. In terms of connectivity, the van offers everything the group has in stock, including OTA updates, Plug & Charge function for convenient charging as well as automatic parking assistance. Added to this are, in the airy interior typical of electric cars, mood lighting with up to 30 colors, seats with optional massage function and a “BuzzBox”, a removable storage compartment that comes take his place between the driver and passenger seats.

The initial five-seat version of the ID. Buzz will later be followed by a seven-seater version with a long wheelbase. As standard, the van is equipped with two sliding side doors. The trunk load volume is 1121 litres, or even 2205 liters when the second row of seats is fully folded down. The three-seater Transporter has no rear seat and has a cargo capacity of up to 3900 liters. The permissible total weight is three tons, the payload is limited to 650 kg.

Like other ID electric models, the Buzz too is based on the band’s MEB architecture, which allows for various battery and motor sizes. At first, however, Volkswagen is limiting itself to a 77 kWh (net) battery which powers a 150 kW/204 hp electric motor placed on the rear axle. Volkswagen makes no mention for the time being of the autonomy of the ID.Buzz, limited to 145 km/h, but it should be in the medium to high range of 400 kilometers, based on the data of the SUV ID.4, a little more aerodynamic and smaller. Other variants should follow, but there is nothing concrete about it. Charging is via an 11kW on-board charger, with the fast charger up to 170kW. The manufacturer indicates a duration of 30 minutes for a typical charge of five to 80%.

Volkswagen has yet to release pricing for its new e-Bulli. A starting amount in Germany of around 60,000 euros for the passenger car variant has leaked, which represents a significant additional cost compared to the conventionally powered Multivan T7, which starts with us at 48,220 francs. These two vehicles will form the Wolfsburg manufacturer’s large-volume sedan range in the future, while the Buzz Cargo has its counterpart in the current VW T6.1. The latest ID model therefore cannot and should not yet completely replace the existing family of vans and vans. The first vehicles should arrive at Swiss dealerships in the fall, the pre-sale will start in May.

See also  Ford Maverick: what are the rivals of the new pick up that will arrive in Argentina