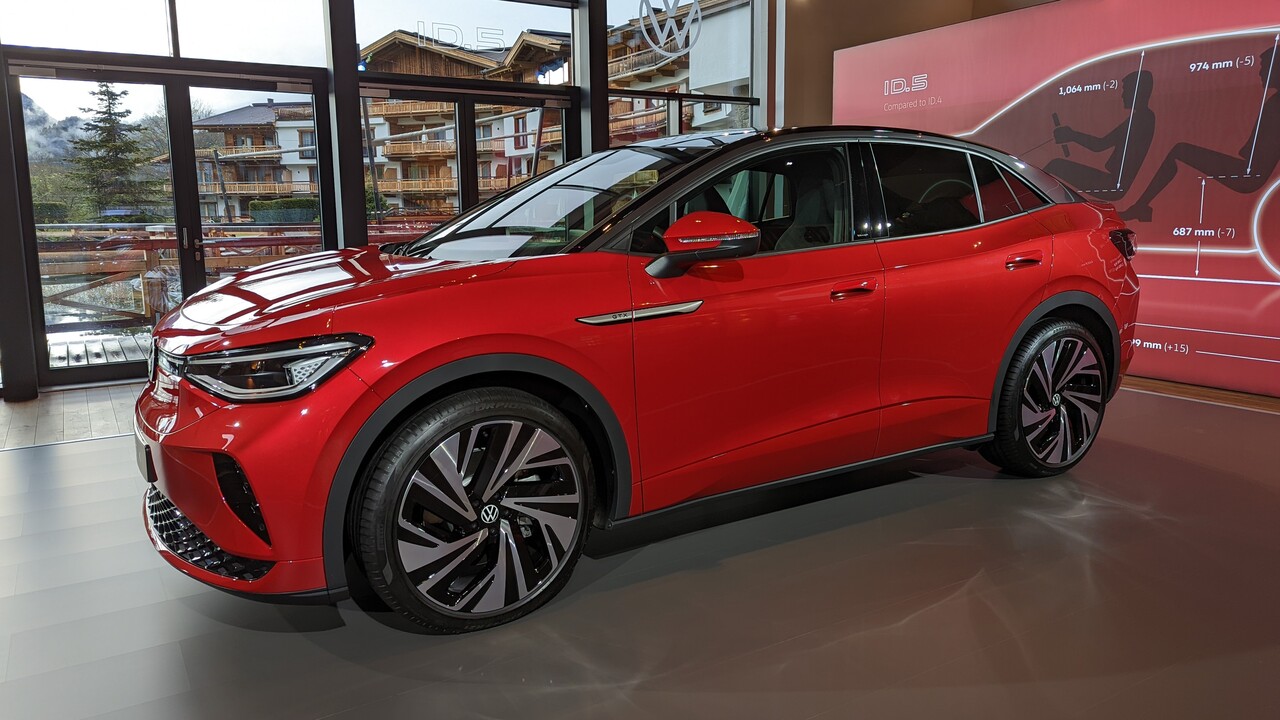 VW ID.5 test drive – parks as well or badly as you do

With the ID.5, Volkswagen is offering a coupe-like E-SUV as an alternative to the ID.4 with a high rear. The ID is also on board for (late) delivery. Software 3.0, which should bring several improvements. Among them: Park Assist Plus with memory function, which records parking maneuvers in order to carry them out automatically.

An ID.4 with a flat rear

If the ID.4 is not sporty enough for you, you can also use the new ID.5 from VW, the rear of which is flatter and has an integrated spoiler. It follows the trend of the combination of SUV and coupe, which is implemented at the very other end of the spectrum in Volkswagen AG, for example by the Porsche Cayenne Turbo GT (test). However, the ID.5 is not a completely new car, because apart from the modified body, the vehicle based on the “modular electric drive system” (MEB) is “only” an evolution of an existing model.

In addition to the larger body, the ID.4 and ID.5 set themselves apart from the ID.3 primarily by offering a GTX model with all-wheel drive and more power. In addition to the “Pro” and “Pro Performance” variants with a synchronous machine on the rear axle, which provides 128 kW/174 hp and 150 kW/204 hp respectively, the GTX also has an asynchronous machine on the front axle to increase the system output to 220 kW / 299 hp to raise. With 6.3 s from 0 to 100 km/h and a top speed increased by 20 km/h to 180 km/h, these are the sportiest e-models from VW. The significant increase in performance makes a noticeable difference in intermediate sprints in a direct comparison of the Pro and GTX, but the ID.5 has not changed into a “presser in the seat” even with almost 300 hp. On the country roads in Austria, the GTX made a lot more fun than the weaker version, without putting too much emphasis on sportiness. The chassis remains comfortable even in sport mode and the sport seats ensure a secure hold. The price for the plus in sportiness: from 53,615 euros.

Technical data of the ID.5 at a glance

The ID.5 is shipped directly from the factory with the ID announced at the end of March. Software 3.0 delivered – if it is actually delivered. Regardless of the motorization selected, the ID.5 should only go to customers in ten to twelve months, as VW explained when asked. Some buyers will therefore potentially already have their vehicle with ID. Received Software 3.1 that will introduce Plug & Charge. The ID.5 automatically authenticates itself using a certificate previously installed in the vehicle using the We-Connect ID. app as soon as the customer plugs the charging cable into a compatible DC fast charging station, and then starts encrypted communication between the car and the station. After a short wait, the charging process should start automatically without having to use charging cards. Plug & Charge is supported by charging infrastructures such as Ionity, Aral, BP, Enel, E.ON as well as Iberdrola and Eviny.

Is there an OTA update this time?

A specific date for the ID. However, software 3.1 is not yet available. In addition, VW could not finally confirm at the ID.5 driving event that the update will definitely be possible over the air (OTA) this time – but it is at least planned. Already the ID. Software 3.0 turned out to be too large or complex for an OTA update and can only be installed after the intermediate step on the ID. Software 2.4 has been completed.

Park Assist Plus with memory function

Already with the ID. Software 3.0 is the new Park Assist Plus assistance system with memory function, which is the focus of this article. In addition to the current car operating system, a current configuration of twelve ultrasonic sensors and a new front camera with a powerful, dedicated memory is required on the hardware side. This function is also available with ID. Software 3.0 not available.

Park Assist Plus is the parking aid from VW, which, as part of the 1,300-euro assistance package, provides complete guidance of the car including steering, accelerating, braking and shifting gears when parking and leaving parallel parking spaces at up to 40 km/h and when parking perpendicularly at up to 20 km /h takes over as soon as these are detected while driving past. The additional memory function is specially designed for teaching and carrying out parking processes that are not necessarily carried out in classic public parking spaces for parallel and perpendicular parking, but, for example, in garages or carports. In Austria, ComputerBase was able to try out the system in the driveway of a hotel, but also on the side of the road in classic parallel parking.

Front camera gets its own memory

This implementation is made possible by a dedicated memory in the vehicle’s front camera, which stores the last 50 m in a buffer at speeds below 40 km/h. The camera is equipped with a temporary memory designed for many write and read processes, which is continuously overwritten with the current data in the scenario mentioned, and a permanent memory in which up to five parking processes with their own names can be stored if desired. The permanent memory is also dedicated to the camera, so that the memory of the infotainment system is not used.

When is the system used?

A solution such as Park Assist Plus with a memory function can be useful, for example, if the car should always be parked perfectly with the charging connection at the home charging station. Even tight parking in a garage or against a house wall can be handed over to the vehicle. In addition to private property, parking is possible on public roads and parking lots, although the assistance system was not necessarily designed for this.

It should be noted in all situations that the car will not perform the parking process any better than the driver had previously learned. For this reason, only the most perfect possible parking maneuvers should be stored in the system, because the system otherwise replicates numerous maneuvers one-to-one as they were previously carried out amateurishly by the driver. The memory function is just that: a playback of the previously recorded manual parking process of the person. When recording, moving objects such as other cars are recognized so that they are not stored as a permanent obstacle.