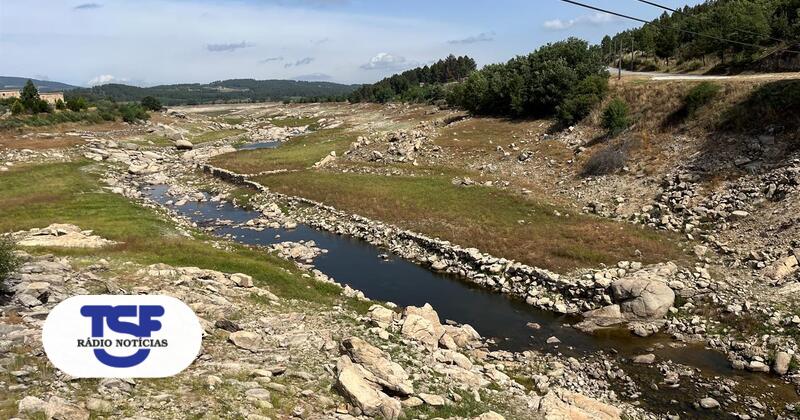 The Vilar dam, which serves the municipalities of Sernancelhe, Moimenta da Beira and Tabuaço, in the district of Viseu, is at historically low levels. It is one of the emptiest reservoirs in the country, which is making locals and apple growers in the area apprehensive.

Carrazeda council prepares to fetch water from the Tua river

The banks are now further from the bed of the Távora River. Despite the reduced flow, in the village of Faia, in Sernancelhe, there are still people trying to fish. This is the case of António Lopes who got up early to cast the hook into the water.

“It is rare to see the dam as it is now”, confesses the emigrant in France, assuring that, despite everything, it is still possible to fish.

Who didn’t venture into that was António Almeida, who didn’t even take the cane out of the car.

“I like the fish to come out, last year it came out much more. This year I came here several times and nothing came out yet”, he says, without hiding his dismay that the dam has “little water”. “It’s bad for agriculture too,” she spits.

In Faia, the entire population is worried about the drought. Maria de Lurdes Cruz looks with “a pain of soul” at the reservoir.

“I’ve never seen anything like it. Even the kids now in the summer used to go there to bathe, this year they’re afraid to go there because it’s very deep and there have already been many misfortunes here at the dam”, he recalls.

“We are very worried. Where are we going to get the water to drink? God is in charge”, he says, adding that he prays every day so that there is no shortage of water in the locality.

The reservoir is low, but it still hasn’t dried up like it did in 1983. That year, the dam “was dumped for repair”, recalls the president of the Junta da Faia, Carlos Teles.

The mayor guarantees that the public supply to the populations is assured and hides his concern about fighting forest fires this summer.

“It used to be a dam for all types of planes and now neither big nor small. The small ones still manage to come there from time to time, but with great care, the Canadair can’t do it anymore, they don’t have space to get up and catch. not, but this could be a tragedy”, he warns.

Apple growers, one of the most important fruits for the region’s economy, are also concerned about the lack of water in the dam.

Listen here to the report on the Vilar dam

In these dry days, Nazaré Caiado, a fruit grower for 12 years, has to use a pump to remove water from the reservoir in order to feed the orchards they have in the villages of Faia and Cabaços.

“The water is getting lower and we have to put the pump further and further away”, he says, adding that as the dam “is very low”, the producers are also taking less water.

“We can’t spend a lot because it’s too low,” he explains.

Nazaré does not believe that the water will last until the apples are picked, around September. For now, farmers are still authorized to use the dam, but the scenario from now on is bleak.

“If you tell us no [podemos tirar mais água] dry everything”, he argues.

Armando Rafael Ferreira, a young apple grower in the village of Vilar, is also concerned.

“I still have the possibility of capturing the river, but if the river continues to go down as it is, they could take that right away from us”, he says.

The 29-year-old has a 250,000-litre tank, fed with water from the reservoir, which he fills every three days. With the fruits growing on the trees, he argues that the supply to the orchards must be maintained.

“The fruit is growing and it has to grow and we cannot lack water at this time”, he warns.

With the drought that is felt in the village of Faia, the farmer Óscar Paixão has already left some crops aside.

“If a winter week came [a barragem] filled soon. It hasn’t rained at all here. I have a piece of land up there, what counts is the mine and the hole I have there, if it weren’t for that, everything would dry up”, she laments.