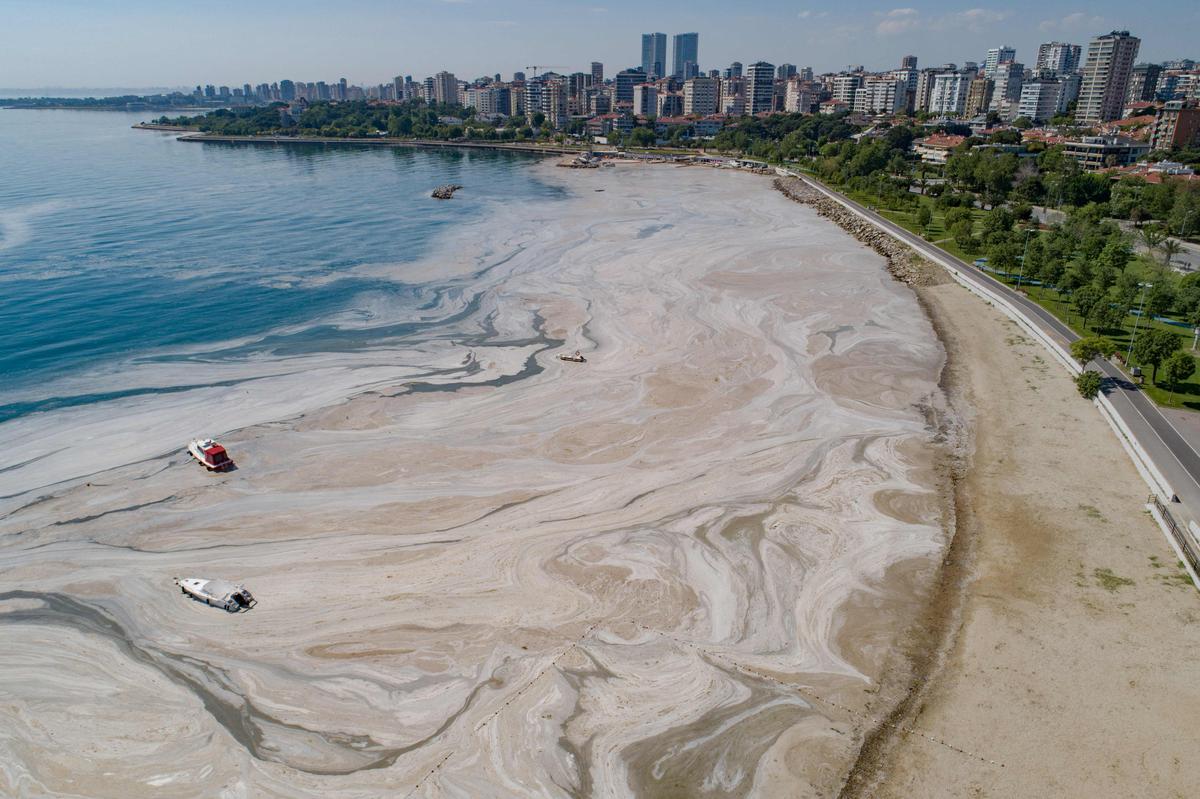 A viscous foam has invaded the coast of northwestern Turkey for several weeks, a phenomenon that worries conservationists.

Mucilages, sometimes nicknamed “sea snot”, appear when plant organisms living in suspension in the water swell to form a kind of yellowish mucus which covers large areas of the sea. In addition to the inconvenience for residents and fishermen , the mucilages pose above all a danger for the ecosystem by blocking in particular the sunlight and by depriving the underwater flora and fauna of oxygen.

The sheets of mucilages have multiplied in recent weeks in the Sea of ​​Marmara, including in Istanbul, the economic capital of Turkey. This natural phenomenon was first recorded in Turkey in 2007. But the current invasion is by far the largest to date.

According to experts, it is due to pollution and warming temperatures, which promote the proliferation of plant substances at their origin.

“The mucilages cover the surface of the sea like a sheet. After a while, it sinks into the water and covers the “marine ecosystem, poisoning molluscs and crustaceans,” explains Muharrem Balci, professor of biology at Istanbul University. “If this process is not stopped, a rotten egg smell will appear” soon, he emphasizes.

Up to 30 meters deep

Fishermen are already strongly affected by this phenomenon. “Do you know what it does to shellfish?” It prevents them from closing in […] The sea snails die, and so do the fish, because they can no longer breathe, ”explains Mahsum Daga. “The other day I saw 20 or 30 shrimp on a layer of mucilage. They were all dead. They got stuck after jumping ”out of the water, adds one of his colleagues, Muhterem Güldane.

The invasion of mucilages could last all summer if urgent measures are not taken, alarms Cevahir Efe Akçelik, environmental engineer and secretary general of the Union of Chambers of Engineers and Architects of Turkey. “Studies show that the mucilages are no longer just on the surface, but also at depths of 25, 30 meters. “

The Sea of ​​Marmara, which stretches from Istanbul to the Aegean Sea, is bordered by areas that are among the most populated, industrialized and polluted in Turkey. The problem is aggravated by the high pollution of the Danube, a river that flows into the Black Sea, which is connected to that of Marmara by the Bosphorus Strait.

The Turkish authorities have deployed trawlers to drain the viscous substances, but experts believe that these means are insufficient. For Muharrem Balci, it would be necessary in particular for the coastal towns to coordinate their actions and for the substances discharged into the sea by the factories to be better treated.