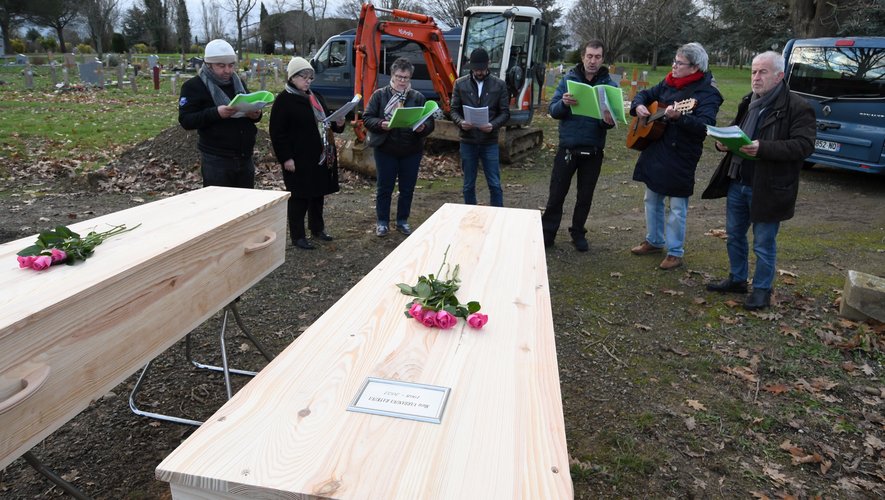 VIDEO. Toulouse: the regained dignity of the street dead

the essential Since 2008, the Toulouse association Goutte de vies has been celebrating the funerals of homeless people who died in the street. Musical songs and eulogies accompany these castaways of life, without family, towards their final resting place. In the suburban cemetery of Cornebarrieu (31), a couple of Bulgarian Roma have just been buried, who died in a squat, while singing Brassens.

“Adios amigos”, “RIP, rest in peace”, then a flower which rises, above a heart, scribbled in ballpoint pen on the two wooden coffins in white pine. Maria Varbanova Raykova, 54, and Ivalin Iliev Valev, 44, this Bulgarian Roma couple found dead in the greatest destitution on December 12, in a squat in the Paléficat district, in Toulouse, receives the last tributes before the burial , in the heart of the suburban cemetery of Cornebarrieu (31).

This Friday, January 13, the fresh wind sweeps dead leaves watered by the drizzle. In front of the two coffins covered with three roses, Joseph, a former music teacher, accompanies the voices of his six acolytes on the guitar. In a serious tone, they sing “Chanson pour l’Auvergnat”, this hymn to fraternity that warms hearts. Maria and Ivalin probably did not know Brassens, let alone this small group of seven solidarity volunteers who organize their funerals as if they were lifelong friends. Deceptive proximity. Because in the space of a few minutes and at the time of saying goodbye to them, they have become close friends, brothers, sisters, all driven by the same momentum: to restore dignity to the anonymous people who died in the street, under a bridge or isolated between four walls.

Bernard, a retired policeman, solemnly takes the floor: “We have come together today to pay tribute to a Bulgarian Roma couple who died in dramatic circumstances. They were squatting in an old abandoned house to protect themselves from the cold. They had been in France for five years, still in a squat, far from the world. To warm up, they lit a brazier. They died of asphyxiation by carbon monoxide”. Bernard has just pronounced the brief eulogy to which this couple would never have been entitled without the support of the Toulouse association Goutte de vies to which he belongs.

This group of around twenty members is made up of doctor Thierry Marmet, founder of the palliative care unit at the Joseph-Ducuing hospital in the 1990s. It also brings together members of the friendship and fraternity group (GAF) and of the Kokeliko choir which brightens up the ceremonies with songs recorded in a repertoire and chosen in connection with the profile of the deceased. “Singing unites us,” confides Marie-Martine, a dedicated retiree. By his side, Youcef, a former homeless person, has attended the funerals of his former “brothers in arms” since the age of 10. An unfailing solidarity that time and the harshness of life do not erase. “To die in such conditions is always sad. We would like to do a lot more for them, especially since in the street, people like that, we don’t even look at them, they are not respected”.

Planting of lavender and maintenance of graves

Since 2008, Goutte de vies and its humanist volunteers have been working to restore dignity to these dead on the tarmac. When friends in misfortune come forward, it is teardrops of beer or whiskey that they pour over the coffins, as a tribute. Drops of lives that gave the name to the association. Every year, around thirty homeless people die, in Toulouse, in the greatest isolation, often without family and without ties, (795 homeless people identified in Toulouse in 2022, +5% compared to 2019) and whose average age reached 56 years old. In total, there are 350 graves maintained and embellished each year, in the spring, by this great street family. Weed removal. Plantation of lavender. Here, death has its garden and the deceased never join it alone.

See also  The draw date for the recruitment of workers of the Ministry of Health has been announced: When is the İŞKUR draw? - Last Minute Turkey News

“As soon as we learn of the death of a homeless person, continues Bernard, we launch research to try to find the family or relatives. A very complicated task”. Maria and Ivalin are buried side by side, as they lived, as they died. No family, no friends. Under these conditions, it is the municipality in which they die which takes charge, at its expense, of the funeral with the municipal funeral directors. About this very discreet couple, we only know a few things. Unknown to the city’s social services and organizations, Maria and Ivalin lived cut off from the world. A young Bulgarian who used to bring them food, in this squat north of Toulouse, found them lifeless, with their cat, on the evening of December 12. This man had an uncle who transported him but who would have gone back to Bulgaria, promising to return at the end of February. But whatever. Goutte de vies watches over the paradise of the anonymous.

In 2022, the town hall of Toulouse listed 795 homeless people, an increase of 5% compared to 2019 when there were 760. An increase which is explained by easier access to squats for enumerators. In 2020, the number of these homeless reached 785. They were 773 in 2021. These are people living exclusively in squats and homeless. In addition, in 2022, 2,741 people were accommodated in emergency hotels made available by the prefecture and 2,963 were accommodated in various reception facilities through associations and city services.