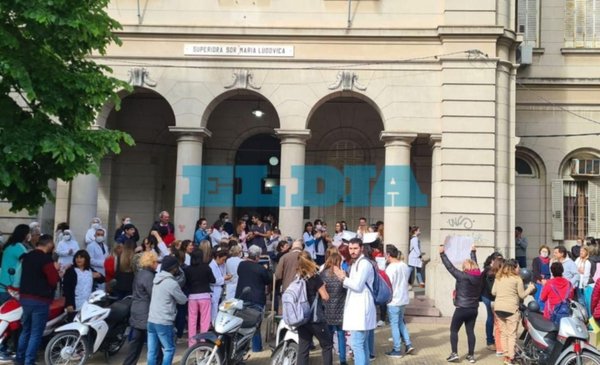 VIDEO. They embrace the Children’s Hospital for collapsed guards, low staffing and salaries: they march to Health

Professional and auxiliary employees of the “Sor María Ludovica” children’s hospital in La Plata this morning held a symbolic hug for the entity of 14 and 66 and will then go to the Governor’s office and the Ministry of Health to demand better working wage conditions, for the collapse of the guards and the lack of coverage of different pediatric specialties.

The head of the medical clinic service and president of the Association of Professionals, Zulma Fernández, insisted that the day of protest is not framed “in a union issue or in the determination of force measures”, but that the workers are “concerned about the “hospital downsizing”.

As he explained, the demands revolve around wages, residences, human resources and working conditions.

“Throughout the province, the vacancies in paediatrics were left empty, they told us that they were going to work to solve this problem. They asked for quick appointments,” the specialist slipped.

At the same time, he pointed out that “the progressive decrease in human resources has increasingly had an impact on the quality and quantity of care we can provide”.

“Doctors who are already trained and experienced are resigning and leaving with better job offers, and residences remain unfilled because younger people do not want such a burden for salaries that do not exceed 130,000 pesos per month,” he said.

As outlined, the discomfort was expressed by the lack of coverage of medical quotas. “Out of 25 nursing homes, 4 have been filled, but for some time several things have been noticed which are shrinking the hospital,” he said.

As a result of this framework, Fernández warned that “admission to some services is closed because people do not want to come and work for 130,000 pesos.”

In their claim, professionals highlighted “the deterioration over the years of care in the Urology Service for various reasons, as well as the closing of rooms, a lack of resources and diagnostic imaging equipment, a lack of operating room staff, a lack of specialist in pediatric anesthesia, lack of plant cover before the retirement of colleagues”.

“In the Toxicology Service there is a lack of human resources, there is a lack of interest in low wages. There are only 3 doctors to cover seven days,” they explained. And they added that “we are tired, discouraged, we feel that, as always, we are giving everything we can for and for the patient and we have no incentive.”

In turn, they highlighted “lack of human resources in gastroenterology”. “Our residence in this area is abandoned because the salary is not attractive.” “Young doctors prefer to train in Garrahan or to apply for a scholarship in private sanatoriums.”

Similarly, they reported that the problem of lack of staff also occurs in the Internal Medicine unit. “There are still the uncovered guards given by the excess work that has to be covered by an extremely low salary,” they said.

“Hospital beds have been reduced by 30 percent, which makes it very difficult to accept referrals that we know deserve to be in our hospital,” he emphasized.

In addition, they stated that in the waiting room we “work on weekends with little staff and there is a lot of demand, between 250 and 300 patients, who come not only from La Plata, but also from the suburbs.”

“We must be heard to provide humanized guidance to patients and families with complex and chronic illnesses,” they said.