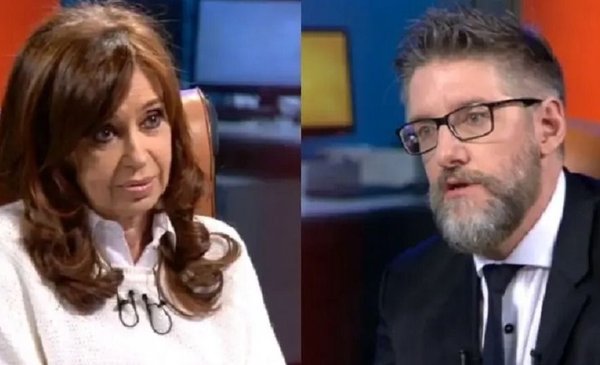 The television host Luis Novaresio in 2017 accused the then candidate for senator Cristina Kirchner of “treason to the fatherland” during an interview broadcast live by Infobae. The video becomes relevant today after the presentation of the vice president at the hearing requesting annulment of the case for the Memorandum with Iran, where he described the complaint as “a legal nonsense.”

“It seems to me that it is appropriate for me to say it in front of you: it seems to me that the agreement clearly violated the natural judge by creating a commission of 7 people from each of the parties, where you had to ask the commission for permission. That is why I think the crime of treason that is imputed to him at least admits the analysis “, Novaresio hesitated, who quickly asked a question to Cristina Kirchner to prevent you from making a comment about the accusation of treason.

In disbelief, the then candidate shook her head and with a smile asked Novaresio: “Are you talking to me seriously, Luis? Do you think that the crime of treason?” At that moment, the television host replied: “No, let’s say, metaphorically as Article 214 of the Penal Code says. We are very lawyers, I want to tell you doctor.”

Faced with the statement, Cristina Kirchner changed her tone and explained: “Sorry Luis, if we are going to talk about lawyers we are going to talk seriously about the Constitution. (The memorandum) is an agreement between two countries signed according to what the Constitution, according to the Vienna Convention, which is the one that governs bilateral treaties between countries and is also approved by the National Congress, by deputies and senators. It is a non-judicial act, it is not an act of war. ”

Then Cristina Kirchner argued what may be the reasons that lead journalists like Luis Novaresio to accuse her of the crime of treason applicable in war situations. “I understand that they want to force things for geopolitical reasons, for orientations, for all that we talked at the beginning about the disparity of opinions we have about things, but really treason of the country. Either way, this is treason or cover-up is part of a judicial prosecution. ”

To close her position, the vice president at that time recalled that only Juan Domingo Perón had been accused of treason. “It seems to me a nonsense, a nonsense that has neither feet nor head”. Novaresio at that time said that he took what he said and changed the subject to talk about Venezuela.