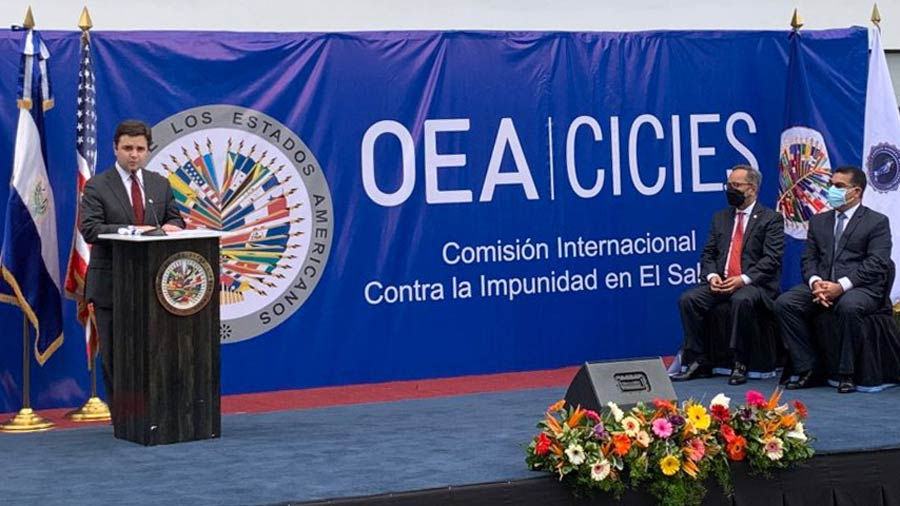 In an official statement, the inter-American body denounces “the recurrent attitude of the Government of trying to induce the CICIES to investigate actions of exclusively opposition politicians.”

The General Secretariat of the Organization of American States (OAS) revealed that the government of Nayib Bukele tried to use the Corruption Investigating Commission (CICIES) to persecute the political opposition and detailed a series of maneuvers to save current officials indicated by corruption cases.

In an official statement, the inter-American body denounces “the recurrent attitude of the Government of trying to induce the CICIES to investigate actions of exclusively opposition politicians.”

This is how President Bukele responded to Illustrative and non-commercial journalists / Video https://youtu.be/JOFPdcvolk4

In this sense, it considers that “it is absolutely inappropriate and contrary to the commitment that the General Secretariat assumed that the CICIES would never be an instrument of political persecution by the government” of Bukele.

SEE: The OAS denies that there is a contract with Muyshondt and regrets the closure of CICIES in El Salvador

Among the movements of the Salvadoran regime, the statement indicates the “amnesty” approved by the official New Ideas party and its allies, on May 5, when it only reached the Assembly, to “benefit people who may have participated in acts corruption due to the immunity established in Article 4 of said law ”.

In November, the prosecutor Raúl Melara, unconstitutionally dismissed by the pro-government deputies on May 1, reported that he was investigating 12 cases of alleged corruption due to contracts and irregular purchases made by the Bukele government in the health emergency.

See also  "Do not come with two euros in your wallet because it takes years to migrate, it is not magic": the experience of an Argentine who went to Spain in the middle of a pandemic | Chronicle

But said regulation leaves in impunity any case of corruption that officials have committed in the pandemic and evades the purchasing processes established in the Procurement and Contracting Law (Lacap).

“The CICIES could not continue working in a framework of eventual impunity,” emphasizes the General Secretariat.
He also mentioned “the decision of the Government of Bukele not to publish the First Descriptive Report on the Quality, Effectiveness and Legitimacy of the use of Public Funds in response to the COVID-19 pandemic. In said report a series of irregularities of criminal appearance that it is necessary to investigate ”is verified”.

The OAS communiqué mentions a suffocation of the CICIES by the Attorney General’s Office, led by the tax tax, Rodolfo Delgado, which has completely “cut off” the Commission’s possibilities of investigation.

Delgado broke the cooperation agreement between the Prosecutor’s Office and the OAS for the investigation of corruption and this morning affirmed that “there is no going back” in the decision.

“At the end of the day, it is a decision that will be executed in the next 30 days, by July 4,” Delgado said. And he added: “We are willing to maintain that decision because I question the constitutionality of some functions within the agreement signed with the FGR and with the protocol that was derived from that agreement, which was the accompaniment of the criminal exercise, which I do not think.”

For its part, the OAS General Secretariat explained that it had differences with the Bukele government that “were known to Donors and the Government of El Salvador itself, who had been told that they made it impossible to continue the work of the Commission”.

Also read: ICEFI proposes that CICIES publish the 12 cases of alleged corruption linked to the government

On the other hand, the Central American Institute for Fiscal Studies (ICEFI) proposed on Saturday that the 12 cases of alleged corruption linked to five government institutions reported by the International Commission against Impunity in El Salvador (CICIES) be made public.

The proposal was made by Ricardo Castaneda Ancheta, ICEFI Senior Economist for El Salvador and Honduras, after the announcement by Prosecutor Delgado that the agreement established by the Public Ministry with CICIES, created on September 6, 2019 under an agreement between the Government of El Salvador and the OAS.

On this, Delgado said that he had not spoken because “I have a duty of reserve regarding the investigations.” He admitted that he is aware of the existence of these files. “There are certain warnings, but there are other control mechanisms that are also being implemented,” he added.

For his part, Bukele defended the breaking of the agreement on Friday, without further details and neglecting to answer the journalists’ questions if something has to do with the 12 cases that the prosecutor, Raúl Melara, sent to the CICIES to investigate possible acts of corruption committed by health officials and other ministries in purchases made during the pandemic. “We made the mistake of trusting the OAS,” he said.